Xorn is a fictional character published by Marvel Comics. First appearing in New X-Men Annual 2001, Xorn was a new addition to the X-Men membership during writer Grant Morrison's revamp of the franchise.

Originally depicted as a Chinese mutant with a "star for a brain", he is eventually revealed to be the X-Men's archnemesis Magneto in disguise at the climax of Morrison's run. After Magneto is apparently killed in the "Planet X" story arc, he appears alive and well a few months later in 2004's Excalibur Vol. 3 #1, which established that Xorn never was Magneto. Marvel has presented several partial explanations, both in the comics pages and in the press as to the true nature, identity, and motives of Xorn.

Xorn debuts in New X-Men Annual 2001 imprisoned by the Chinese government, where a corrupt mutant official offers to sell him to John Sublime. Xorn is forced to wear a skull-like mask designed to restrain his energy output. The X-Men and Sublime's U-Men find Xorn just as he is attempting to commit suicide by removing his mask, which would destroy the Earth. Cyclops (with the help of Emma Frost) is able to establish contact with Xorn, convincing him not to kill himself, and offers him a position among the X-Men. Xorn is next seen in New X-Men #122, where Cyclops tracks him down to a monastery, where he is told by the monks that Xorn has demonstrated healing powers. The pair are captured by the Shi'ar but arrive at the X-Mansion in time for Xorn to heal the X-Men of a nano-Sentinel infection, restoring Professor Xavier's ability to walk in the process.

Despite the ordeals through which he had passed, Xorn is optimistic, open, and even somewhat naive. Xorn keeps a diary to share his thoughts with Professor Xavier, since Xavier is "blinded by the sun beneath [his] mask" and cannot read his mind.[1] Here he details his interactions with Chinese immigrants and the residents of Mutant Town in New York City, in particular an incident where he failed to save a young mutant from being killed by frightened policemen. Xorn is soon put in charge of the "Special Class", a group of physical and social misfits attending the Xavier Institute. Though he hopes to befriend these students, he becomes disillusioned as they mock and insult him. He remains determined to help his "Special Class," even saving their lives from a group of U-Men. 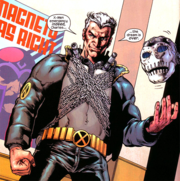 Xorn unmasks himself as Magneto in New X-Men #146. Art by Phil Jimenez

In the storyline "Planet X", Xorn removes his mask, revealing himself to be the X-Men's archnemesis Magneto, who has been believed dead since the destruction of Genosha. Magneto explains that the Xorn identity was an elaborate ruse crafted with the help of Chinese supporters, in order to infiltrate the X-Men; even the prison was a fake.[2] Having returned Xavier to a crippled state (Xavier had not been healed - Magneto merely used the nano-Sentinels to "glue" his spine together), Magneto levels the X-Mansion and conquers New York City, where he enslaves the human population and destroys much of the city. He attempts to recreate the Brotherhood with Toad, the rebellious Stepford Cuckoo Esme, and the members of Xorn's "Special Class."

Magneto finds, however, that many of his recruits are unresponsive to his ideas and approach, with some asking for the return of the more humane Xorn, and others doubtful that Magneto has truly returned, much to his chagrin. Indecisive and relying heavily on the drug Kick to augment his power, he struggles to maintain the loyalty and respect of his followers. He announces a plan to invert the planet by reversing its magnetic poles, and employs increasingly fascistic methods (including the construction of a Nazi-esque crematorium in which he plans to eradicate the remaining human population of the city). He also appears to be experiencing a form of Dissociative identity disorder, as the "Xorn" persona begins to manifest itself as a voice within Magneto's head, claiming to be the embodiment of Magneto's wisdom, idealism, and nobility. After his defeat at the hands of the X-Men, but before his capture, he fatally wounds Jean Grey; Wolverine, in a berserk fury over Grey's death, decapitates him.

The return of Magneto and the second Xorn 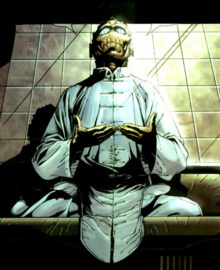 Grant Morrison intended Xorn to be Magneto from his first appearance. As Morrison stated in an interview after he left New X-Men, "In my opinion, there really should not have been an actual Xorn - he had to be fake, that was the cruel point of him".[3] In fact, soon after the revelation of Xorn's identity in New X-Men #146, readers pointed out that clues that Xorn was actually Magneto had been hidden throughout Morrison's run.[4][5] According to then-X-Men writer Chuck Austen, the X-Men editors liked the Xorn character and hoped Morrison would change his mind about the revelation; when he did not, they asked Austen to bring Xorn back as a separate character. Marvel also wanted to continue using Magneto; Austen stated that "Marvel saw value in Magneto not being a mass-murderer of New Yorkers."[6] Morrison has expressed criticism of this subsequent retcon in interviews.[7][8]

Marvel retconned the Xorn/Magneto revelation and brought back Xorn and Magneto after Morrison's departure. In Uncanny X-Men #442 and 443, Xavier takes the body of Magneto to Genosha where they hold a funeral for the deceased mutant leader. However, in the last page of Excalibur #1, Xavier meets Magneto alive and well on Genosha. In subsequent issues of Excalibur, Xavier and Magneto debate the true identity and motives of Xorn, the individual whose bandage-wrapped body they brought to Genosha. In the same month Magneto returned in Chris Claremont's new Excalibur book, Austen's X-Men #157 introduced a new Xorn named Shen Xorn. Shen Xorn claims to be the twin brother of the original Xorn (now referred to as Kuan-Yin Xorn) who, under the influence of the entity known as Sublime, had pretended to be Magneto. This claim is supported when Emma Frost conducts a thorough mind scan of Shen. Not too long after, Shen Xorn disappears when he unleashes the gravitational forces of a black hole in the course of helping the X-Men defeat an attack by a Brotherhood of Mutants led by Exodus. Later, Shen Xorn is revealed to have been one of the mutants depowered due to the events of the House of M miniseries.

The true identity of Xorn, and his relationship to the character Magneto, became a subject of confusion to fans. Marvel refrained from giving a complete explanation, eventually hinting that the summer 2005 crossover House of M would clear up the situation.[9] The Xorn entry in the Official Handbook of the Marvel Universe: X-Men 2005 stated that "Kuan-Yin eventually revealed himself to be a duplicate of the X-Men's nemesis Magneto, a transformation believed to have been caused by Magneto's daughter, the Scarlet Witch." This explanation was based on a suggestion in House of M #7 wherein Doctor Strange speculates that Wanda has been 'playing with the world' for far longer than even she knows, and may have been responsible for her father's puzzling rebirth. An alternative explanation has since been given in the pages of New Avengers since, according to Marvel editor Tom Brevoort, "nobody was satisfied with that offhanded non-explanation, and it didn’t make a heck of a lot of sense by itself even as a throwaway".[10]

In House of M #7, Scarlet Witch speaks the phrase, "No More Mutants". Suddenly, millions of mutants find themselves human, including Magneto and Quicksilver. In New Avengers, the collective power signatures of the mutants arrive in North Pole, Alaska and merges with a mutant postal worker, Michael Pointer. Disoriented, he enters Canada and, wielding the power of fifty mutants, kills every member of Alpha Flight except Sasquatch, and goes on a rampage destroying downtown Cleveland. Spider-Man and the Vision find that its energy signatures match up with the depowered mutants. On Genosha, the Collective repowers Magneto, who recognizes the intelligence controlling it as "Xorn" just as the New Avengers arrive. Xorn explains that he took the image of Magneto, because he knew mutants would follow him, and that they needed the real Magneto again. Reference is made to Xorn's confusing history as Vision comments that his files on Xorn are incomplete, with Wolverine later commenting "Xorn's files on Xorn are incomplete", demonstrating how not even Xorn seems to be certain who he is. Iron Man, Ms. Marvel, and the Sentry combine their powers and send the Collective/Xorn into the sun; Michael is separated from the Collective. However, Pointer still has access to the powers of the Collective, and, as of the end of the Civil War miniseries, is coerced into joining the newly formed Omega Flight, using a suit designed to harness his powers.

Marvel editor-in-chief Joe Quesada in a 2006 Newsarama interview reiterated the Shen Xorn/Kuan-Yin Xorn explanation, but added that "because Xorn's powers were psychokinetic, and his personality was so strong, it basically remained an almost disembodied sentient thing among the big ball of mutant energy. When that energy got sucked down to Earth by Michael and all absorbed by him, Xorn was the dominant personality in the mix, and that's what drove him towards Genosha and Magneto."[11]

In the 10th anniversary of the Age of Apocalypse which takes place right after the nuclear attack by the Human High Council, Xorn is found by the X-Men in the Breeding Pens following the fall of Apocalypse. In this reality Xorn is female and claimed that her mutant abilities manifested while she and her family were workers in the Seattle Core during the riots that killed the members of Generation Next. Magneto immediately offered her a place with the X-Men.

During her time with the team, Xorn never removed her helmet causing some to believe it contained her energy powers while others in the X-Men whispered that the helmet truly concealed hideous scars from her time in the Core. However the truth was that Xorn was actually the thought deceased Husk who had been brainwashed by Mr. Sinister and assumed the identity of Xorn and used her husking abilities to enable herself to demonstrate many different powers, in order to infiltrate the X-Men and kill Magneto and Rogue's son.

In the Marvel: Ultimate Alliance Heroes and Villains expansion pack, Xorn is the third unlockable costume for Magneto.

"Magneto" as Xorn was available in the second series of Hasbro's Marvel Legends with removable helmet.[12]

The tabletop miniatures game Heroclix released a Xorn figure in its Ultimates set, with the limited edition featured as Magneto in the Xorn costume.