E is for Extinction

E is for Extinction 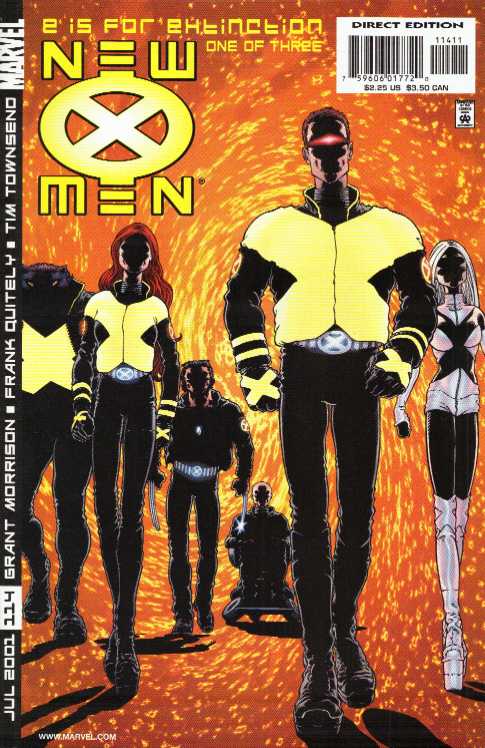 E is for Extinction was the first story arc from 's run on the title "New X-Men". The story was published in "New X-Men" #114-116 in 2001 (formerly titled "X-Men", the series was renamed "New X-Men" at the request of Grant Morrison, but retained its original numbering). The storyline began Grant Morrison's revamp of the X-Men franchise, introducing a new status quo for the X-Men and the mutant community of the Marvel Universe as a whole.

As a new generation of mutants begins maturing across the globe, a long-lost A.I. and sentinel production facility in the jungles of is uncovered by a mysterious woman called . She uses the last surviving relative of to gain control of the wild sentinels and has the man order the Sentinels to massacre the entire population of the mutant nation of . However, Cassandra Nova's presence shows up on the newly created mutant detection machine "Cerebra", created by the Beast, leading to Cyclops and Wolverine finding Cassandra and defeating her. But it's too late, as the nation of Genosha falls to the deadly might of the Sentinels and nearly the entire population of the island state is killed off.

As the X-Men search the rubble, they find former X-Men villain and teacher as one of the survivors, having survived the Sentinel onslaught thanks to her body undergoing a new . At the , Dr. Henry McCoy investigates the biological origins of the powerful enemy they have just captured, while also revealing the possibility of mankind's genetic extinction within the next few generations. When Cassandra suddenly overcomes her imprisonment and effortlessly makes her way to Cerebra (in order to take over 's mind), Emma Frost (who moments before the battle began had left the X-Mansion, intent on revenge against humans for the genocidal Sentinel attack on Genosha) shows up again to snap Cassandra's neck. But Emma arrives too late, as Cassandra has swapped bodies with Xavier and shoots him (now in Cassandra's body) to keep Xavier from revealing what has just happened.

Days pass; and Cyclops reflect upon the marital problems that have popped up due to Cyclop's post-traumatic stress disorder (brought on by Apocalypse possessing Cyclops's body for over a year) when they turn on the TV and see "Xavier" out himself as a mutant on live television.

Grant Morrison's arrival on the X-Men franchise as the new writer of the adjectiveless X-Men book was highly anticipated and featured amongst other things, massive changes for the X-Men franchise. Among which were new designs for the X-Men, where the group abandoned their traditional spandex costumes for leather jackets and conservative turtle-neck sweaters. Additionally, Wolverine and Beast underwent massive visual changes as well, Beast becoming more beast-like than man and Wolverine abandoning his old costume for a new casual look.

This story also led to the break-up of the X-Men's most beloved and recognized couple, Scott Summers/Cyclops and Jean Grey/Phoenix. Morrison, using the event of Cyclops merging with Apocolypse, slowly began to cause a gulf to form between the couple, while at the same time introducing Emma Frost as a new love interest for Cyclops, while touching on a potential Wolverine/Jean Grey romance.

One of the major aspects introduced in the storyline was the concept of "secondary mutations." The concept was created mainly by Morrison to give Emma Frost her diamond skin powers. Relatedly, Morrison had wanted to use Colossus as part of his team, but Colussus had died, sacrificing himself to eliminate the . ["New X-Men: E is for Extinction" (first printing): On page 4 of the "Morrison Manifesto" section (his initial proposal for the series), he mentions Colossus and , and in the margins, a handwritten note states that Colossus & MacTaggart have recently died, and that they have to stay dead (emphasis theirs)] ).

A trade paperback of the storyline was release in 2001; the initial printing of the trade paperback included "New X-Men" #117 (which served as a bridge issue between "E is for Extinction" and the next multi-part storyline "Germ Free Generation") and the "Morrison Manifesto", a detailed account of Grant Morrison's proposal for his plans as writer for the X-Men.

The initial paperback did not have "New X-Men Annual 2001", which was omitted due to issues involving how to reprint the story, which was published in the sideways "Widescreen" format. As the issue contained the set-up for a key number of future major plotlines for the Morrison X-Men run, later printings of the trade paperback removed the "Morrison Manifesto" and replaced it with the annual, which was published in the standard comic format, though still sideways.