Extinction is a term used in astronomy to describe the absorption and scattering of electromagnetic radiation by matter (dust and gas) between an emitting astronomical object and the observer. Interstellar extinction—also called Galactic extinction, when it occurs in the Milky Way—was first recognized as such in 1930 by Robert Julius Trumpler.[1][2] However, its effects had been noted in 1847 by Friedrich Georg Wilhelm von Struve,[3] and its effect on the colors of stars had been observed by a number of individuals who did not connect it with the general presence of Galactic dust.

For Earth-bound observers, extinction arises both from the interstellar medium (ISM) and the Earth's atmosphere; it may also arise from circumstellar dust around an observed object. The strong atmospheric extinction in some wavelength regions (such as X-ray, ultraviolet, and infrared) requires the use of space-based observatories. Since blue light is much more strongly attenuated than red light, extinction causes objects to appear redder than expected, a phenomenon referred to as interstellar reddening. This is not to be confused with the quite separate phenomenon of red shift.[4]

Interstellar reddening occurs when interstellar dust blocks blue light waves, allowing red light waves through, making stars appear redder than they are. This is similar to the effect seen when dust particles in the atmosphere of Earth contribute to red sunsets.[5]

Broadly speaking, interstellar extinction is strongest at short wavelengths. This results in a change in the shape of an observed spectrum. Superimposed on this general shape are absorption features (wavelength bands where the intensity is lowered) that have a variety of origins and can give clues as to the chemical composition of the interstellar material, e.g. dust grains. Some known absorptions features include the 2175 Å bump, the diffuse interstellar bands, the 3.1 μm water ice feature, and the 10 and 18 μm silicate features.

Usually, the rate of interstellar extinction in the Johnson-Cousins V-band is taken to be 0.7-1.0 mag / kpc in the Solar Neighborhood.[citation needed] This means that a star will have its brightness reduced by about a factor of 2 in the V-band for every kiloparsec it is further away from us.

The amount of extinction can be significantly higher than this in specific directions. For example, some regions of the Galactic center have more than 30 magnitudes of extinction in the optical, meaning that less than 1 optical photon in 1012 passes through.[6] This results in the so-called zone of avoidance, where our view of the extra-galactic sky is severely hampered, and background galaxies, such as Dwingeloo 1, were only discovered recently through observations in radio and infrared.

The general shape of the ultraviolet through near-infrared (0.125 to 3.5 μm) extinction curve in our own Galaxy, the Milky Way, is fairly well characterized by the single parameter R(V) (which is different along different lines of sight through the Galaxy),[7][8] but there are known deviations from this single parameter characterization.[9] R(V) is defined to be A(V)/E(B-V), and measures the total, A(V), to selective, E(B-V) = A(B)-A(V), extinction in set bands. A(B) and A(V) are the total extinction at the B and V filter bands. Another measure used in the literature is the absolute extinction A(λ)/A(V) at wavelength λ, comparing the total extinction at that wavelength to that at the V band.

R(V) is known to be correlated with the average size of the dust grains causing the extinction. For our own Galaxy, the Milky Way, the typical value for R(V) is 3.1,[10] but is found to be between 2.5 and 6 for different lines of sight. The relationship between the total extinction, A(V) (measured in magnitudes, and the column density of neutral hydrogen atoms column, NH (usually measured in cm-2), shows how the gas and dust in the interstellar medium are related. From studies using ultraviolet spectroscopy of reddened stars and X-ray scattering halos in the Milky Way, Predehl and Schmitt (1995) [11] found the relationship between NH and A(V) to be approximately,

Astronomers have determined the three-dimensional distribution of extinction in the solar circle of our Galaxy, using visible and near-infrared stellar observations and a model of the distribution of stars in the Galaxy.[14] [15] The dust giving rise to the extinction lies along the spiral arms, as observed in other spiral galaxies.

Measuring extinction towards an object

To measure the extinction curve for a star, the star's spectrum is compared to the observed spectrum of a similar star known not to be affected by extinction (unreddened).[16] It is also possible to use a theoretical spectrum instead of the observed spectrum for the comparison, but this is less common. In the case of emission nebulae, it is common to look at the ratio of two emission lines which should not be affected by the temperature and density in the nebula. For example, the ratio of hydrogen alpha to hydrogen beta emission is always around 2.85 under a wide range of conditions prevailing in nebulae. A ratio other than 2.85 must therefore be due to extinction, and the amount of extinction can thus be calculated.

One prominent feature in measured extinction curves of many objects within the Milky Way is a broad 'bump' at about 2175 Å, well into the ultraviolet region of the electromagnetic spectrum. This feature was first observed in the 1960s[17][18] but its origin is still not well understood. Several models have been presented to account for this bump which include graphitic grains with a mixture of PAH molecules. Investigations of interstellar grains embedded in interplanetary dust particles (IDP) observed this feature and identified the carrier with organic carbon and amorphous silicates present in the grains.[19]

Extinction curves of other galaxies 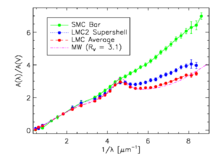 Plot showing the average extinction curves for the MW, LMC2, LMC, and SMC Bar.[20] The curves are plotted versus 1/wavelength to emphasize the UV.

The form of the standard extinction curve depends on the composition of the ISM, which varies from galaxy to galaxy. In the Local Group, the best-determined extinction curves are those of the Milky Way, the Small Magellanic Cloud (SMC) and the Large Magellanic Cloud (LMC). In the LMC, there is significant variation in the characertistics of the ultraviolet extinction with a weaker 2175 Å bump and stronger far-UV extinction in the region associated with the LMC2 supershell (near the 30 Doradus starbursting region) than seen elsewhere in the LMC and in the Milky Way.[21][22] In the SMC, more extreme variation is seen with no 2175 Å and very strong far-UV extinction in the star forming Bar and fairly normal ultraviolet extinction seen in the more quiescent Wing.[23][24][25] This gives clues as to the composition of the ISM in the various galaxies. Previously, the different average extinction curves in the Milky Way, LMC, and SMC were thought to be the result of the different metallicities of the three galaxies: the LMC's metallicity is about 40% of that of the Milky Way, while the SMC's is about 10%. Finding extinction curves in both the LMC and SMC which are similar to those found in the Milky Way[20] and finding extinction curves in the Milky Way that look more like those found in the LMC2 supershell of the LMC[26] and in the SMC Bar[27] has given rise to a new interpretation. The variations in the curves seen in the Magellanic Clouds and Milky Way may instead be caused by processing of the dust grains by nearby star formation. This interpretation is supported by work in starburst galaxies (which are undergoing intense star formation episodes) that their dust lacks the 2175 Å bump.[28][29]

Atmospheric extinction varies with location and altitude. Astronomical observatories generally are able to characterise the local extinction curve very accurately, to allow observations to be corrected for the effect. Nevertheless, the atmosphere is completely opaque to many wavelengths requiring the use of satellites to make observations.

Atmospheric extinction has three main components: Rayleigh scattering by air molecules, scattering by aerosols, and molecular absorption. Molecular absorption is often referred to as 'telluric absorption', as it is caused by the Earth ("telluric" is a synonym of "terrestrial"). The most important sources of telluric absorption are molecular oxygen and ozone, which absorb strongly in the near-ultraviolet, and water, which absorbs strongly in the infrared.

In astronomy, interstellar reddening is a phenomenon associated with interstellar extinction where the spectrum of electromagnetic radiation from a radiation source changes characteristics from that which the object originally emitted. Reddening occurs due to the light scattering off dust and other matter in the interstellar medium. Interstellar reddening should not be confused with the redshift, which is the proportional frequency shifts of spectra without distortion. Reddening preferentially removes shorter wavelength photons from a radiated spectrum while leaving behind the longer wavelength photons (in the optical, light that is redder), leaving the spectroscopic lines unchanged.