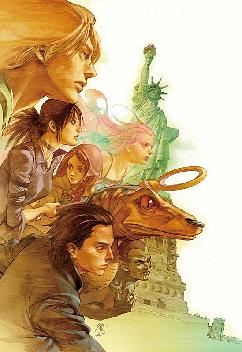 Runaways is a multiple award-winning

"Runaways" launched in 2002 as part of Marvel Comics' "Tsunami" imprint.

Early in the series, Molly is the only character who makes a costume but creates it from old bed sheets and clothes,

* - Daughter of dark wizards Robert and Tina Minoru, Nico was discovered to be a witch after her mother jammed the spell-casting mystical Staff of One into her chest. To use the Staff, she must shed blood. She later discovered she could never use the same spell twice. She is the group's leader.

* - Creation of android Avengers' foe and the DNA of human Marianella Mancha, Victor discovered his powers after his first encounter with superheroes (the Runaways). He has the power to conduct and control electricity, and also use metal to fly. He can also use metal to explode things.

The Pride is the head of an organized crime syndicate that runs L.A. Their children (, , , , , and ) witness them making a sacrifice to the Gibborim, who are responsible for the Pride's creation. As the story progresses, the children learn of their heritage and abilities, and they decide to remove their parents from control of L.A. At the end of the first arc, it is revealed Alex is still loyal to the parents. He betrays the others so that the Gibborim will save only his and Nico's families. After the remaining children defeat Alex and their parents, they vow to prevent other villains from filling the void left by their parents. Eventually, they meet , the son of the robot, who joins them under the pretense that he has suffered a similar tragedy. , a Skrull who plans to marry Karolina, arrives to take her with him in order to help stop the ongoing war between their races, but both return to the Runaways after their wedding causes tension. When Alex's online friend realize that he has gone missing, and, after assuming that the Pride were heroes, attempt to resurrect him. This goes awry and results in being summoned from a point in his past. After two failed sacrifices, Geoffrey fatally wounds Gertrude, who transfers control of Old Lace to Chase. Chase briefly leaves the group and takes Old Lace with him, but later returns. Geoffrey has his memory of the time travel erased and is returned to his time.

conducts his run on the series by having the Runaways—in a run plagued with delays—travel back to 1907. Chase proves he has accepted Gert's death, Victor is involved in a Romeo/Juliet love affair, Xavin's identity is proven, and they encounter Gertrude Yorkes' parents.

The travel to Los Angeles to help the Runaways with pro-registration forces. The two teams encounter , who works for and attempts to capture the teenagers.

After their return from 1907, the Runaways find themselves in New York, where the Skrull Armada has invaded, seeking . After being attacked, with Xavin pretending to be loyal to the Skrulls to protect her friends, they retreat away from the battle while Xavin helps Hulkling escape his pursuers.

The series is currently being written by , and drawn by .

With the help of a spell from Nico ("Scatter") she manages to separate the Majesdanians, sending vaRikk to , deHalle to , and the General to (, ). Her spell fails to work on vaDanti, and the others wonder what is different about vaDanti from the other three.

At one point, Gertrude's future self travels back in time.

Goofy versions of the original team, including , are seen in the "What, Huh?" one shot as part of a joke about Wolverine appearing in every comic including , , and . [ [http://www.maelmill-insi.de/UHBMCC/WHATIF3.HTM What, Huh? volume one, issue one] ]

For the 2008 series of "What If", a story which sees the Runaways become the will run as a back-up story though all five issues.

In the House of M reality warp, the Pride is mentioned in ruling not only , but all of Southern California. Unlike the normal mainstream reality, their children stay with their parents. ["House of M: Avengers" #4]

As of , a film version of the comic is in the scripting state, with writing and producing.

"Runaways" has been collected in the following digest-sized comic book collections trade paperbacks:

"Runaways" has also been collected in the following oversized s: