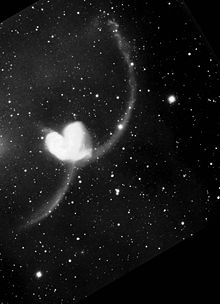 The Antennae are undergoing a galactic collision. Located in the NGC 4038 group with five other galaxies, these two galaxies are known as the 'Antennae' because the two long tails of stars, gas and dust thrown out of the galaxies as a result of the collision resemble the antennae of an insect. The nuclei of the two galaxies are joining to become one giant galaxy. Most galaxies probably undergo at least one significant collision in their lifetimes. This is likely the future of our Milky Way when it collides with the Andromeda Galaxy. Two supernovae have been discovered in the galaxies: SN 2004GT and SN 2007sr.

Within 400 million years, the Antennae's nuclei will collide and become a single core with stars, gas, and dust around it.[citation needed] Observations and simulations of colliding galaxies suggest that the Antennae Galaxies will eventually form an elliptical galaxy.[5] 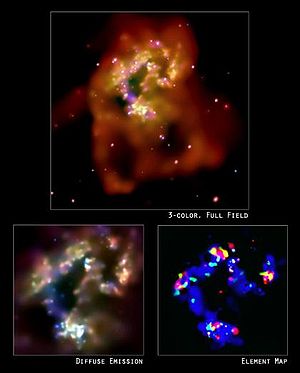 This montage of Chandra images shows a pair of interacting galaxies known as The Antennae. The top image, a wide field X-ray view, reveals spectacular loops of hot gas spreading out from the southern part of The Antenna into intergalactic space. In the closeup view on the lower left, the point sources have been taken out to emphasize the hot gas clouds in the central regions of The Antennae. The image at the lower right is processed and color-coded to show regions rich in iron (red), magnesium (green) and silicon (blue). Image is 4.8 arcmin across. Instrument: ACIS. Color code: Energy (Red: 0.3–0.65 keV, Green: 0.65–1.5 keV, Blue: 1.5–6.0 keV). Credit: NASA/CXC/SAO/G.Fabbiano et al.

Rich deposits of neon, magnesium, and silicon were discovered from the Chandra X-ray Observatory analysis of the Antennae Galaxies. These elements are among those that form the building blocks for habitable planets. The clouds imaged contain magnesium and silicon at 16 and 24 times, respectively, the abundance in the Sun.