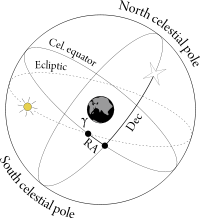 The sign is customarily included even if it is positive. Any unit of angle can be used for declination, but it is often expressed in degrees, minutes, and seconds of arc.

When an object is directly overhead its declination is almost always within 0.01 degree of the observer's latitude; it would be exactly equal except for two complications. The first complication applies to all celestial objects: the object's declination equals the observer's astronomic latitude, but the term "latitude" ordinarily means geodetic latitude, which is the latitude on maps and GPS devices. The difference usually doesn't exceed a few thousandths of a degree, but in a few places (such as the big island of Hawaii) it can exceed 0.01 degree. For practical purposes the second complication only applies to solar system objects: "declination" is ordinarily measured at the center of the earth, which isn't quite spherical, so a line from the center of the earth to the object is not quite perpendicular to the Earth's surface. It turns out that when the moon is directly overhead its geocentric declination can differ from the observer's astronomic latitude by up to 0.005 degree. The importance of this complication is inversely proportional to the object's distance from the earth, so for most practical purposes it's only a concern with the moon.

A star lies in a nearly constant direction as viewed from Earth, with its declination roughly constant from year to year, but right ascension and declination do both change gradually due to precession of the equinoxes, proper motion, and annual parallax.

The declinations of all solar system objects change much more quickly than those of stars.

Declination of the Sun as seen from Earth

At the moment of each equinox, the center of the Sun appears to pass through the celestial equator, and δ☉ is 0°.

The Sun's declination at any given moment is calculated by:

Where EL is the ecliptic longitude. Since the Earth's orbital eccentricity is small, its orbit can be approximated as a circle which causes up to 1 degree of error. The circle approximation means the EL would be 90 degrees ahead of the solstices in Earth's orbit (at the equinoxes), so that sin(EL) can be written as sin(90+NDS)=cos(NDS) where NDS is the number of days after the December solstice. By also using the approximation that arcsin[sin(d)*cos(NDS)] is close to d*cos(NDS), the following frequently used formula is obtained:

where N is the day of the year beginning with N=0 on January 1st at Coordinated Universal Time noon. The number 10, in (N+10), is the approximate number of days after the December solstice to January 1st. This equation overestimates the declination near the September equinox by up to +1.3 degrees, or +1.8 degrees if January 1st starts as 1. The sine function approximation by itself leads to an error of up to 0.26 degrees and has been discouraged for use in solar energy applications. The 1971 Spencer formula[1] (based on a fourier series) is also discouraged for having an error of up to 0.28 degrees.[2] An additional error of up to 0.5 degrees can occur in all equations around the equinoxes if not using a decimal place when selecting N to adjust for the time after Coordinated Universal Time's noon. So the above equation can have up to 2.3 degrees of error, over 4 times the Sun's angular width, depending on how it's used.

where N begins as 1 at noon on January 1st and can include decimals to adjust for the time after Coordinated Universal Time. The number 2, in (N-2), is the approximate number of days after January 1 to the Earth's perihelion. The number 0.0167 is the current value of the eccentricity of the Earth's orbit. The eccentricity varies very slowly over time, but for dates fairly close to the present, it can be considered to be constant. The largest errors in this equation occur at the equinoxes and are less than +/- 0.2 degrees at Coordinated Universal Time's noon, but are less than +/- 0.02 degrees for a given year when the number 10 is adjusted between 9.5 and 10.5 based on the year in the leap year cycle (compared to NOAA's more advanced JavaScript calculation).[4]

More complicated algorithms[5][6] correct for changes to the ecliptic longitude by using terms in addition to the 1st-order eccentricity correction above. They also correct the 23.44 obliquity which changes very slightly with time. Corrections may also include the effects of the moon in offsetting the Earth's position from the center of the pair's orbit around the Sun. After obtaining the declination relative to the center of the Earth, a further correction for parallax is applied, which depends on the observer's distance away from the center of the Earth. This correction is less than 0.0025 degrees. The error in calculating the position of the center of the Sun can be less than 0.00015 degrees. For comparison, the Sun's width is about 0.5 degrees. The declination calculations do not include the effects of the refraction of light in the atmosphere, which causes the apparent angle of elevation of the Sun as seen by an observer to be higher than the actual angle of elevation, especially at low Sun elevations. For example, when the Sun is at an elevation of 10 degrees, it appears to be at 10.1 degrees. The declination can be used in calculating the Sun's azimuth and its true elevation, which can then be corrected for refraction to give the Sun's apparent position.[7]

The Sun's path over the celestial sphere changes with its declination during the year. Azimuths where the Sun rises and sets at the summer and winter solstices, for an observer at 56°N latitude, are marked in °N on the horizontal axis.