The Detroit Institute of Arts (DIA) is a renowned art museum in the city of Detroit. In 2003, the DIA ranked as the second largest municipally owned museum in the United States, with an art collection valued at more than one billion dollars.[1] With over 100 galleries, it now covers 658,000 square feet (61,130 m²); a major renovation and expansion project completed in 2007 added 58,000 sq. ft. (5,388 m²).[2] The museum building is highly regarded by architects.[3] The original building, designed by Paul Philippe Cret, is flanked by north and south wings with the white marble as the main exterior material for the entire structure. It is part of the city's Cultural Center Historic District listed in the National Register of Historic Places.

The museum's first painting was donated in 1883 and its collection consists of over 65,000 works. The DIA is an encyclopedic museum: its collections span the globe from ancient Egyptian works to contemporary art. The DIA is located in Midtown Detroit's Cultural Center Historic District, about two miles (3 km) north of the downtown area, near Wayne State University. The Detroit Institute of Arts hosts major art exhibitions and also contains the 1,150-seat Detroit Film Theatre (designed by theatre architect C. Howard Crane). 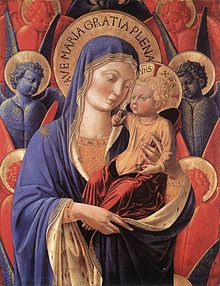 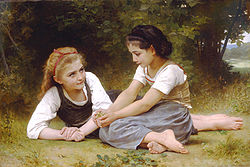 The Nut Gatherers, by William-Adolphe Bouguereau 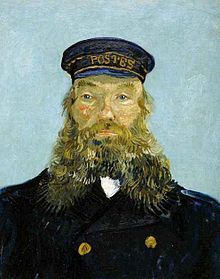 Portrait of the Postman Joseph Roulin, by Vincent Van Gogh, 1888

The early 20th century was a period of prolific collecting for the museum, which acquired such works as a dragon tile relief from the Ishtar Gate of Babylon, an Egyptian relief of Mourning Women and a statuette of a Seated Scribe, Pieter Bruegel the Elder's The Wedding Dance, St. Jerome in His Study by Jan van Eyck and Giovanni Bellini's Madonna and Child. Early purchases included French paintings by Claude Monet, Odilon Redon, Eugene Boudin, and Edgar Degas, as well as Old Masters including Gerard ter Borch, Peter Paul Rubens, Albrecht Dürer and Rembrandt Harmenszoon van Rijn. The museum includes works by Vincent van Gogh including a self-portrait. The self-portrait of Vincent van Gogh and The Window by Henri Matisse were purchased in 1922 and were the first paintings by these two artists to enter an American public collection. Later important acquisitions include Hans Holbein the Younger's Portrait of a Woman, James Abbott McNeill Whistler's Nocturne in Black and Gold: The Falling Rocket, and works by Eugène Delacroix, Auguste Rodin, Jean-Baptiste Carpeaux and Francois Rude. German Expressionism was embraced and collected early on by the DIA, with works by Heinrich Campendonk, Franz Marc, Karl Schmidt-Rottluff, Max Beckmann, Karl Hofer, Emil Nolde, Lovis Corinth, Ernst Barlach, Wilhelm Lehmbruck, Erich Heckel, Ernst Ludwig Kirchner, Paula Modersohn-Becker, and Max Pechstein in the collection. Non-German artists in the Expressionist movement include Oskar Kokoschka, Wassily Kandinsky, Chaim Soutine and Edvard Munch. The Nut Gatherers by William-Adolphe Bouguereau is, by some accounts, the most popular painting in the collection.

In addition to the American and European works listed above, the collections of the Detroit Institute of Arts are generally encyclopedic and extensive, including ancient Greek, Roman, Etruscan, Mesopotamian, and Egyptian material, as well as a wide range of Islamic, African and Asian art of all media.

In December 2010, the museum debuted an all new permanent gallery with special collections of hand, shadow, and string puppets along with programmable lighting and original backgrounds. The museum plans to feature puppet related events and rotation of exhibits drawn from its puppet collections.[4]

Before 1920, a commission was established to choose an architect to design a new building to house the DIA's expanding collections. The commission included DIA President Ralph H. Booth, William J. Gray, architect Albert Kahn and industrialist Edsel Ford. W.R. Valentiner, the museum director acted as art director and Clyde H. Borroughs was the secretary. The group chose Philadelphia architect Paul Philippe Cret as the lead architect and the firm of Zantzinger, Borie and Medary as associated architects, with Detroit architectural firms of Albert Kahn and C. Howard Crane contributing "advice and suggestions."[5]

The cornerstone for new Beaux-Arts, Italian Renaissance[6] styled building was laid on June 26, 1923 and the finished museum was dedicated on October 7, 1927.

Detail from one of Rivera's frescoes

Later the frescoes by Diego Rivera were added to what had been a courtyard, it was roofed over when the murals were executed, and although widely held to be great works of art today, this was not necessarily the case when they were completed.[7] Architect Henry Sheply, a close friend of Cret's would write:

Unfortunately, some years later the Board of Trustees, in a misguided moment, employed Diego Rivera, the Mexican artist, to execute a series of murals on the walls of the garden. These are harsh in color, scale and composition. They were designed without the slightest thought given to the delicate architecture and ornament. They are quite simply a travesty in the name of art.[8]

The building contained iron work by Samuel Yellin, tile from the Pewabic Pottery Works and architectural sculpture by Leon Hermant.[5]

The south and north wings were added in 1966 and 1971 respectively. Both were designed by Gunnar Birkerts and were originally faced in black granite to serve as a backdrop for the original white marble building. The south wing was later named in honor of museum benefactors Edsel and Eleanor Ford and the north wing for Jerome Cavanaugh who was Detroit Mayor during the expansion.[6][9] The museum is directly across the street from the Detroit Public Library, also constructed of white marble in the Beaux-Arts, Italian Renaissance style.

Hall between old and new sections

In November 2007, the Detroit Institute of Arts building completed a renovation and expansion at a total cost of $158 million. Architects for the renovation included Michael Graves and associates along with the SmithGroup.[10] The project, labeled the Master Plan Project, included expansion and renovation of the north and south wings as well as restoration of the original Paul Cret building, and added 58,000 additional square feet, bringing the total to 658,000 square feet.[2] The renovated exterior of the north and south wings is covered with white marble acquired from the same quarry as the marble on the main building designed by Paul Cret.[10] The major renovation of the Detroit Institute of Arts has provided a significant example of study for museum planning, function, direction, and design.[11] 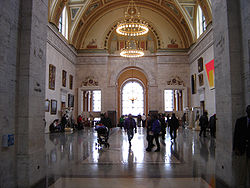 The main hall of the DIA.

The Museum had its genesis in an 1881 tour of Europe made by local newspaper magnate James E. Scripps. Scripps kept a journal of his family's five-month tour of art and culture in Italy, France, Germany, and the Netherlands, portions of which were published in his newspaper The Detroit News. The series proved so popular that it was republished in book form called Five Months Abroad. The popularity inspired William H. Brearley, the manager of the newspaper's advertising department to organize an art exhibit in 1883, which was also extremely well received.

In 1889, Scripps donated 70 European paintings, valued at $75,000 at the time. Later support for the museum came from Detroit philanthropists such as Charles Lang Freer, and the auto barons: art and funds were donated by the Dodges, the Firestones and the Fords, especially Edsel Ford and his wife Eleanor, and subsequently their children. Robert Hudson Tannahill of the Hudson Department Store family, was a major benefactor and supporter of the museum, donating many works during his lifetime. At his death in 1970, he bequeathed a large European art collection, which included works by Paul Cézanne, Vincent van Gogh, Paul Gauguin, Edgar Degas, Georges Seurat, Henri Rousseau, Henri Matisse, Pablo Picasso, Constantin Brâncuşi, important works of German Expressionism, a large collection of African art, and an endowment for future acquisitions for the museum. Part of the current support for the museum comes from the state government in exchange for which the museum conducts state-wide programs on art appreciation and provides art conservation services to other museums in Michigan. 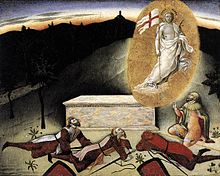 The Resurrection by Master of the Osservanza Triptych, c. 1445

In 1922, Horace Rackham donated a casting of Auguste Rodin's sculpture, The Thinker, acquired from a German collection, to the museum where it was exhibited while the new building was under construction. The work was placed in the Great Hall of the new museum building. Sometime in the subsequent years the work was moved out of the building and placed on a pedestal in front of the building, facing Woodward Avenue and the Detroit Public Library across the street.

Diego Rivera painted the Detroit Industry murals in the central courtyard in 1932.

In 1949, the museum was among the first to return a work that had been looted by the Nazis, when it returned Claude Monet's The Seine at Asnières to its rightful owner. The art dealer from whom they had purchased it reimbursed the museum. In 2002, the museum discovered that Ludolf Backhuysen's A Man-O-War and Other Ships off the Dutch Coast, a 17th century seascape painting under consideration for purchase by the museum, had been looted from a private European collection by the Nazis. The museum contacted the original owners, paid the rightful restitution, and the family allowed the museum to accession the painting into its collection, adding another painting to the museum's already prominent Dutch collection. [1]

In 1970, Anna Thompson Dodge bequeathed the 18th-century French contents of the music room from her home, Rose Terrace, to the museum upon her death.

A 1976 gift of $1 million from Eleanor Ford created the Department of African, Oceanic and New World Cultures.[9]

On February 24, 2006, a 12-year-old boy stuck a piece of chewing gum on Helen Frankenthaler's 1963 abstract work The Bay, leaving a small stain. The painting is valued at $1.5 million as of 2005, and is one of Frankenthaler's most important works. [2] The museum's conservation lab successfully cleaned and restored the painting, which was put back on display in late June 2006.[12]