Highest peaks of Pakistan as seen from space 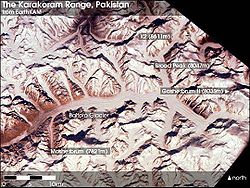 Pakistan is home to many mountains above 7,000 metres (22,970 ft). Five of the fourteen eight-thousanders (peaks above 8,000 m) are in Pakistan, four of which are in Karakoram near Concordia.

Following are the mountain ranges that are fully or partially included in Pakistan:

Template:NOTE: Free Google Earth Telemetry, earlier available for Free, is not available as of August/September 2009; those of you, interested in verifying the above Defined Elevations will now have to Purchase the Program from Google Earth -->