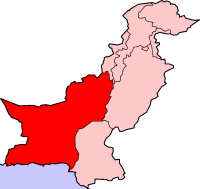 Balochistan, or Baluchistan, Pashto, (Balochi, Hazara,Brahui, Sindhi, : بلوچستان) is a province in , the largest in the country by geographical area; it is slightly smaller than . It contains most of the historical region of Balochistan and is named after the . Its neighbouring regions are to the west, and the to the north and Punjab and to the east. To the south is the . The principal languages in the province are Baluchi, Brahui,Sindhi and Pashto. The capital and largest city is . Balochistan is believed to be rich in mineral resources. It is the second major, after , supplier of natural gas to the country.

Balochistan is located at the eastern edge of the and in the border region between Southwest, Central, and . It is geographically the largest of the four provinces at 347,190 km² or (134,051 square miles) of Pakistani territory; and composes 48% of the total land area of Pakistan. The is very low due to the mountainous terrain and scarcity of water. The southern region is known as . The central region is known as Kalat.

The dominate the northeast corner and the is a natural route into Afghanistan towards and was used as a route during the British campaigns to Afghanistan [Bolan Pass - Encyclopædia Britannica Eleventh Edition] . Much of the province south of the Quetta region is sparse desert terrain with pockets of towns mostly near rivers and streams.

The capital city is , located in the most densely populated district in the northeast of the province. Quetta is situated in a river valley near the border with Afghanistan, with a road to in the northwest.

At on the coast the Pakistani government is currently undertaking a large project with Chinese help to build a large port. This is being done partially to provide the with another base, and to reduce Pakistan's reliance on Karachi and , which are currently the only major ports [ [http://www.atimes.com/atimes/South_Asia/GC04Df06.html China's pearl in Pakistan's waters] ]

Very cold winters and hot summers characterise the climate of the upper highlands. Winters of the lower highlands vary from extremely cold in the northern districts to mild conditions closer to the Makran coast. Summers are hot and dry, especially the arid zones of Chaghai and Kharan districts. The plain areas are also very hot in summer with temperatures rising as high as 120 °F (50 °C). Winters are mild on the plains with the temperature never falling below the freezing point. The desert climate is characterised by hot and very arid conditions. Occasionally strong windstorms make these areas very inhospitable.

The economy of the province is largely based upon the production of natural gas, coal and minerals. Outside , the infrastructure of the province is gradually developing but still lags far behind other parts of Pakistan. Tourism remains limited but has increased due to the exotic appeal of the province. Limited farming in the east as well as fishing along the coastline are other forms of income and sustenance for the local populations. Due to the tribal lifestyle of many Baluch and Brahui, animal husbandry is important as are trading bazaars found throughout the province.

Though the province remains largely underdeveloped, there are currently several major development projects in progress in Balochistan, including the construction of a new deep sea port at the strategically important town of Gwadar.

Further west is the

There are five main public universities in Balochistan, as well as several private institutions.

in south-eastern Balochistan is the site of a space launch centre for suborbital rockets operated by Pakistan's national space agency.

There are many famous people from Balochistan including the following: