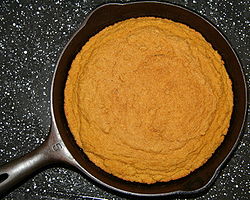 Cornbread baked in an iron skillet 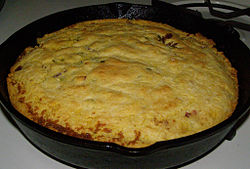 Cornbread is a generic name for any number of quick breads containing cornmeal and leavened by baking powder.[1]

Native Americans were using ground corn (maize) for food thousands of years before European explorers arrived in the New World. European settlers, especially those who resided in the southern English colonies, learned from natives -- "Indians" such as Cherokee, Chickasaw, Choctaw, and Creek -- the original recipes and processes for corn dishes, and soon they devised recipes for using cornmeal in breads similar to those made of grains available in Europe. Cornbread has been called a "cornerstone" of Southern United States cuisine. Cornmeal is produced by grinding dry raw corn grains. A coarser meal (compare flour) made from corn is grits. Grits are produced by soaking raw corn grains in hot water containing calcium hydroxide (the alkaline salt), which loosens the grain hulls (bran) and increases the nutritional value of the product (by increasing available niacin and available amino acids). These are separated by washing and flotation in water, and the now softened slightly swelled grains are called hominy. Hominy, posole in Spanish, also is ground into masa harina for tamales and tortillas). This ancient Native American technology has been named nixtamalization.[2] Besides cornbread, Native Americans used corn to make numerous other dishes from the familiar hominy grits to liquors (as Andean chicha). Cornbread was popular during the American Civil War because it was very cheap and could be made in many different forms—high-rising, fluffy loaves or simply fried (as unleavened pone, corn fritters, hoecakes, etc.)[1]

Cornbread is a popular item in soul food enjoyed by many people for its texture and scent. Cornbread can be baked, fried or, rarely, steamed. Steamed cornbreads are mushy, chewier and more like cornmeal pudding than what most consider to be traditional cornbread. Cornbread can also be baked into corn cakes. 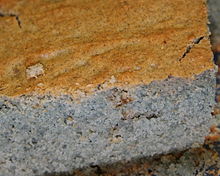 Cornbread is a common bread in United States cuisine, particularly associated with the South and Southwest, as well as being a traditional staple for populations where wheat flour was more expensive. In some parts of the South it is crumbled into a glass of cold buttermilk and eaten with a spoon, and it is also widely eaten with barbecue and chili con carne. In rural areas of the southern United States in the mid 20th century cornbread, accompanied by pinto beans (often called soup beans in this context) or honey, was a common lunch for poor children. It is still a common side dish, often served with homemade butter, chunks of onion or scallions. Cornbread crumbs are also used in some poultry stuffings; cornbread stuffing is particularly associated with Thanksgiving turkeys.

In the United States, Northern and Southern cornbread are different because they generally use different types of corn meal and varying degrees of sugar and eggs.[4] A preference for sweetness and adding sugar or molasses can be found in both regions, but saltier tastes are sometimes more common in the South, and thus favor the addition of frying the bread with such additions as cracklins. Sometimes, cornbread is crumbled and served with cold milk similar to cold cereal. In Texas, the Mexican influence has spawned a hearty cornbread made with fresh or creamed corn kernels, jalapeño peppers and topped with shredded cheese.

Skillet-fried or skillet-baked cornbread (often simply called skillet bread or hoecake depending on the container in which it is cooked) is a traditional staple of rural cuisine in the United States, especially in the South. This involves heating bacon drippings, lard or other oil in a heavy, well-seasoned cast iron skillet in an oven, and then pouring a batter made from cornmeal, egg, and milk directly into the hot grease. The mixture is returned to the oven to bake into a large, crumbly and sometimes very moist cake with a crunchy crust. This bread tends to be dense and usually served as an accompaniment rather than as a bread served as a regular course. In addition to the skillet method, such cornbread also may be made in sticks, muffins, or loaves.

A slightly different variety, cooked in a simple baking dish, is associated with northern US cuisine; it tends to be sweeter and lighter than southern-style cornbread; the batter for northern-style cornbread is very similar to and sometimes interchangeable with that of a corn muffin. A typical contemporary northern U.S. cornbread recipe contains half wheat flour, half cornmeal, milk or buttermilk, eggs, leavening agent, salt, and usually sugar, resulting in a bread that is somewhat lighter and sweeter than the traditional southern version. In the border states and parts of the Upper South, a cross between the two traditions is known as "light cornbread."

Unlike fried variants of cornbread, baked cornbread is a quick bread that is dependent on an egg-based protein matrix for its structure (though the addition of wheat flour adds gluten to increase its cohesiveness). The baking process gelatinizes the starch in the cornmeal, but still often leaves some hard starch to give the finished product a distinctive sandiness not typical of breads made from other grains.

Corn pone (sometimes referred to as "Indian pone") is a type of cornbread made from a thick, malleable cornmeal dough (which is usually egg-less and milk-less) and baked in a specific type of iron pan over an open fire (such as a frontiersman would use), using butter, margarine, or cooking oil. Corn pones have been a staple of Southern U.S. cuisine, and have been discussed by many American writers, including Mark Twain. In the Appalachian Mountains, cornbread cooked in a round iron skillet is still referred to as a "pone" of cornbread.

The term "corn pone" is sometimes used to refer to one who possesses certain rural, unsophisticated peculiarities ("he's a corn pone"), or as an adjective to describe particular rural, folksy or "hick" characteristics (e.g., "corn pone" humor). The term is sometimes intended as a pejorative, often directed at persons from rural areas of the southern and midwestern U.S.

Cooked on a rangetop, one frying method involves pouring a small amount of liquid batter made with boiling water and self-rising cornmeal (cornmeal with soda or some other chemical leavener added) into a skillet of hot oil, and allowing the crust to turn golden and crunchy while the center of the batter cooks into a crumbly, mushy bread. These small (3-4" diameter) fried breads are soft and very rich. Sometimes, to ensure the consistency of the bread, a small amount of wheat flour is added to the batter. This type of cornbread is often known as "hot water" or "scald meal" cornbread and is unique to the American South.

Pouring a batter similar to that of skillet-fried cornbread, but slightly thinner, into hot grease atop a griddle or a skillet produces a pancake-like bread called a jonnycake. This type of cornbread is prevalent in New England, particularly in Rhode Island, and also in the American Midwest and the American South. It probably derives from the hoecake, made simply of liquid and cornmeal roasted in a patty on a piece of flat metal such as the blade of a hoe.

A thicker buttermilk-based batter which is deep-fried rather than pan-fried, forms the hushpuppy, a common accompaniment to fried fish and other seafood in the South. Hushpuppy recipes vary from state to state, some including onion seasoning, chopped onions, beer, or jalapeños. Fried properly, the hushpuppy will be moist and yellow or white on the inside, while crunchy and light to medium-dark golden brown on the outside.