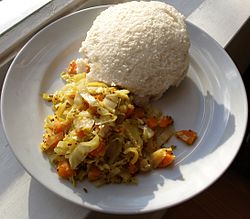 /ˈpɑːp/), a traditional porridge made from mielie-meal (ground maize or other grain), is a staple food of the Bantu inhabitants of South Africa (the Afrikaans word pap is taken from Dutch and simply means "porridge" or "gruel"). Many traditional South African dishes include pap, such as smooth maize meal porridge (also called slap pap), pap with a very thick consistency that can be held in the hand (stywe pap) and a more dry crumbly phutu pap. Such dishes are enjoyed primarily by the indigenous black population and the Afrikaner population, rather than those of English or South Asian descent[citation needed].

A variety of savouries are used to accompany pap, made from green vegetables, and flavoured with chilli.

Afrikaners in the northern parts of the country[citation needed] eat it as a breakfast staple, with milk and sugar, but also serve it with meat and tomato-stew (usually tomato and onion) at other meals, When they are having a braai, stywe pap or phutu pap with a savoury sauce like tomato and onion or mushroom and cheese is an important part of the meal[citation needed].

In the Cape-provinces it is almost exclusively seen as a breakfast food[citation needed]. Since mielie-meal is inexpensive, poor people combine it with vegetables. It can be served hot or, after it has cooled, it can be fried. Phutu porridge is sometimes enjoyed with chakalaka as a side dish with braais.

Pap is also called ugali in eastern and some parts of southern Africa; sadza/isitshwala in Zimbabwe; nsima in Zambia and Malawi; phaletshe in Botswana and banku in West Africa. Another South African name for it is mieliepap.[citation needed] from the Afrikaans words "Mielie", meaning "Corn", and "Pap".

In Nigeria, it is called akamu amongst the Igbo and ogi amongst the Yorubas with a consistency similar to American pudding. Ogi/Akamu in Nigeria is generally accompanied with "moin moin" a bean pudding or "akara" which is a bean cake. A similar dish is polenta, from northern Italy. In the United States a similar dish is known as grits. The primary difference between the US and the South African dishes is that in the US the maize (or corn) used is a yellow kernel maize, whereas in South Africa maize is especially grown for human consumption with white kernels, allowing the whole kernel to be used for the maize meal[citation needed].