Thomas Michael "Tom" Menino (born December 27, 1942) is the mayor of Boston, Massachusetts, United States and the city's first Italian-American mayor. He is the longest-serving mayor in the history of the city.

Born in Readville, a part of Boston's Hyde Park neighborhood, Menino was educated at Chamberlayne Junior College (AA, Business Management, 1963) and the University of Massachusetts Boston (BA, Community Planning, 1988). He currently resides in Hyde Park with his wife, Angela Faletra. They have two children: Susan and Thomas Jr.

Menino had served nine years on Boston's city council when Ray Flynn left the mayor's seat to become US ambassador to the Vatican. The council president at the time, Menino became acting mayor for four months before being elected to his first term in November 1993, defeating State Representative James Brett with 64% of the vote and becoming the city's first non-Irish-American mayor since 1930. After running unopposed for a second term in 1997, Menino defeated Boston City Councilor Peggy Davis-Mullen in 2001 for a third term with 76% of the vote [2] and in 2005 garnered 67% of the vote in beating Maura Hennigan, another councilor. [3] On July 13, 2009 Menino became the longest-serving mayor in Boston history. On November 3, 2009 Menino garnered 57% of the vote, defeating Boston City Councilor Michael F. Flaherty and securing an unprecedented fifth term.

Menino has been hospitalized several times since taking office. He has been admitted for abdominal pain and intestinal inflammation, and was treated for kidney stones in 1995 and 1997. In 2003, Menino underwent surgery at Brigham and Women's Hospital to remove a rare sarcoma (DFSP) on his back. The tumor had not spread, and the mayor was able to return to work in a matter of days. In 2004, the mayor's doctors confirmed he has been diagnosed with Crohn's disease, helping to explain his recurring intestinal problems. The condition requires life-long treatment with anti-inflammatory medication and careful monitoring of his diet. [4] 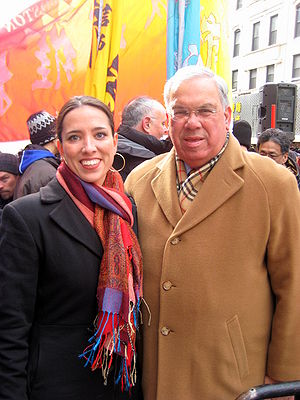 According to Mayor Menino’s official biography, “Among his main priorities, are: providing every child with a quality education; creating affordable housing; lowering the crime rate; revitalizing Boston's neighborhoods; and promoting a healthy lifestyle for all city residents.”

In 2006, Menino proposed two major construction projects that would have a major impact on the city. Trans National Place is a proposed 1,000-foot (300 m) tower to be built on the site of a city-owned parking garage in Boston's Financial District. The second proposal calls for the city to sell Boston's City Hall, a 1960's example of Brutalism architecture. Menino would then have the city use the proceeds from the sale to fund construction of a new seat of government on the South Boston waterfront, on the site of the current Bank of America Pavilion (Drydock 4). As of early 2011, neither project had moved forward.

In March 2011, Menino proposed renovating the abandoned Ferdinand's Furniture building in the Roxbury neighborhood of Boston and relocating 400 Boston Public School employees from the School Department's headquarters at 26 Court Street, a block from Boston's City Hall. The "Ferdinand" building is a circa-1895, Baroque Revival structure located in the Dudley Square area of Roxbury. The renovation is estimated to cost $100-115 million, an amount raised by issuing municipal bonds that would be paid back by selling or leasing five of the city's municipal buildings.[5]

On April 25, 2006, Menino and New York City mayor Michael Bloomberg hosted a summit at Gracie Mansion in New York City, during which the Mayors Against Illegal Guns Coalition was formed. The coalition, of which Menino remains co-chair, stated its goal of "making the public safer by getting illegal guns off the streets." The initial group consisted of 15 mayors; the 15 drafted and signed a statement of principles[1] and set a goal to expand their membership to 50 mayors by the end of 2006. That goal was met six months ahead of schedule, and led to its current membership of 210 mayors, with members from both major political parties and 40 states.[2]

Menino is famous for bringing the Democratic National Convention to Boston in 2004. Though controversial in the beginning for fundraising difficulties, security concerns, protests by unions, and inconvenience to residents, Menino estimates the convention generated $150 million in business for the city. Meanwhile, other estimates suggest the convention generated $14.8 million for the city.[3]

In 2008, the City of Boston was ranked as the third greenest city in the US by Popular Science Magazine. [6] In the last decade, there have been new initiatives around planting more trees in the city, single-stream recycling, increasing the solar power capacity of the city, investing in alternative energy, and biking. One of the most innovative ideas has been green building zoning, which requires large-scale private construction to be “green” by LEED standards. Boston is the first city to revise building code to ensure green construction. [7] Documentary “The Greening of Southie,” by Ian Cheney and Curt Ellis, tells the story of the first green residential building in Boston. [8]

Controversially, in recent years the Menino administration has been looking into selling the City's second largest public park, Mary Cummings Park for development.[4] Part of this 210 acres (0.85 km2) of public park land has been designated by the Commonwealth of Massachusetts as a Priority Habitat for Rare Species.

The Mayor's Youth Council, started in 1994,[5] meets with Mayor Menino twice a month to discuss Youth based issues in the city of Boston.

In April of 2011, in an effort to battle obesity, Boston Mayor Thomas Menino has banned the sale and advertising of sugar-loaded drinks from city-owned buildings and city-sponsored events. http://www.cityofboston.gov/news/uploads/5742_40_7_25.pdf

Mayor Menino is known for his distinctive voice and malapropisms, leading some (such as conservative radio show host and author Howie Carr) to call him "Mumbles Menino"[6][7] or "Mayor Mumbles". Typical examples involve references to Boston's parking shortage as "an Alcatraz around my neck" (meaning, instead, an albatross around his neck) and referred to former mayor John F. Collins as "a man of great statue" rather than stature.[8] At least one website has been developed to document Menino's verbal gaffes.

In 2004 during the MLB playoffs at a rally for the Boston Red Sox Mayor Menino said: “Much like a cookie, I predict the Yankee dynasty will crumble and the results will be delicious for Red Sox fans."[9]

During the 2004 presidential race, Menino was asked if he would run for John Kerry's Senate seat should the Senator win, and responded "I will not be candidation nor I'll seek, but I'll accept a draft," an apparent attempt to evoke Lyndon Johnson's famous quote, "I shall not seek, and I will not accept, the nomination of my party for another term as your president."[10]

During a ceremony honoring Boston Bruins hockey legend Bobby Orr, Menino mentioned a number of "ionic" Boston sports figures, including "Varitek splitting the uprights." Jason Varitek is a member of baseball's Red Sox; Menino probably had Varitek confused with Adam Vinatieri, the New England Patriots football kicker known for game winning kicks in Super Bowls XXXVI and XXXVIII. Also, at a dedication ceremony at the Tobin Community Center in 2010 when the Boston Celtics were in the NBA Finals, he mispronounced NBA Commissioner David Stern's name as "Donald Sterns."

On October 11, 2011, explaining his decision to order the Boston Police Department to use force on peaceful Occupy Boston demonstrators, Menino said, "I simplify [sic] with their issues, some of those issues we really have to look at in America, but when it comes to civil disobedience I will not tolerate civil disobedience in the city of Boston." [11]

Mayor Menino enjoys high approval ratings among residents of Boston. An April, 2008 Boston Globe-UNH poll indicated that the city was “smitten” with the Mayor, with a 72% approval rating. 54% reported having personally met the Mayor.[12] While he is not without his critics, Menino's perennial popularity has garnered him the tongue-in-cheek epithet "Mayor for Life."[13][14][15][16][17][18][19]

On April Fool's Day 1998, radio personalities Opie and Anthony, who were on station WAAF at the time, told their listeners Menino died in a fiery car accident while vacationing solo in Florida. Many believed the story, leading Menino to file a complaint with the Federal Communications Commission, as the FCC prohibits the broadcast of knowingly false information if it causes public harm.[20] WAAF suggested that the duo have pies thrown at them while being held in town square stocks. The idea was summarily dismissed by the mayor's office. Facing a possible license challenge, WAAF fired them, but Opie and Anthony promised that they would return to Boston and get revenge. During the early days of XM Anthony stated that the intent of the April Fool's prank was to allow the duo to be released from their contract with WAAF. He also stated that the duo had been having illicit meetings with WNEW before the April fools prank.[21]

In 2001, Menino personally intervened to help stop a chain drugstore from opening a few blocks from a pharmacy owned by a close friend and political supporter. The case raised questions about favoritism and the city's zoning practices.[22]

In 2009, the Boston Globe printed an article alleging questionable behavior in Menino's mayoral campaign race.[25] The article reported several instances of questionable behavior, including more than one case of Menino's associates monitoring Michael F. Flaherty's Facebook affiliations. According to the article, the Menino campaign sent out a campaign memo containing the name of at least one small business owner who supported Flaherty.

In 2011, Menino's former mayoral opponent, Michael Flaherty, alleged that his former running mate Sam Yoon had to leave Boston after running against Menino because the mayor's allies made it difficult for Yoon to find a job locally.[26]

Later in 2011, controversy arose surrounding Menino's decision to evict members of the Occupy Boston protest, on the Rose Kennedy Greenway. Menino later commented that "...civil disobedience will not be tolerated."[27]