Cline Falls State Scenic Viewpoint (also known as Cline Falls State Park) is a state park near Redmond, Oregon, United States. It is located on the Deschutes River. The park covers 9 acres (36,000 m2). It is administered by the Oregon Parks and Recreation Department.

Cline Falls are located on the Deschutes River approximately four miles west of Redmond, Oregon. The falls were named for Doctor C. A. Cline (1850–1926) a Redmond dentist, who owned the land adjacent to the falls. The falls occur just north of the point where Highway 126 crosses the Deschutes River.[2] In the 1950s, the Oregon Parks and Recreation Department acquired property above Cline Falls for the purpose of creating a day use park.[3]

Cline Falls State Scenic Viewpoint is a day use park that covers 9 acres (36,000 m2) on the east side of the Deschutes River. It is located on the south side of the Highway 126. Because Clines Falls are a short distance north of the highway, the falls are not within the park boundary.[4][5]

The park has a large open lawn surrounded by Ponderosa pine, Western juniper, poplar, and locust trees that extend to the river’s edge.[3][5] The park also includes riparian habitat, sagebrush covered uplands, and canyon rimrocks. These areas are home to Blackbirds, Canyon Wren, American Dipper, Song Sparrows, and finches. Other song birds pass through the area during the spring and fall migrations. Prairie Falcon and Golden Eagles are also found in the Cline Falls area.[5][6]

As it flows by the park, the Deschutes River alternates between small rapids and calm pools. The rapids pass around a number of very large boulders. The calm sections create wetlands along the shore that attract a variety of wildlife. Canadian Geese and other water fowl are common in the wetlands along the river.[3][4][5] A number of small mammals including the Great Basin Pocket Mouse and Sagebrush Voles are found in the park as well.[7] 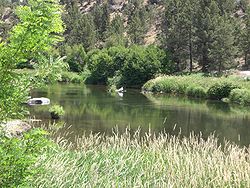 Since it is the closest river front park to the city of Redmond, Cline Falls State Scenic Viewpoint is a very popular recreation site for local residents. A large open lawn is available for group games and relaxing in the sun; however, most visitor come to the park to picnic and swim. The park offers a variety of swimming areas ranging from deep, calm pools to shallow coves. There are also short stretches of swift water for inner tubing.[3][4][5][8]

The Deschutes River provides excellent rafting, kayaking, and canoeing opportunities. One of the longer paddle trips on the Deschutes is a 14.5-mile (23.3 km) section of river beginning at Tumalo State Park and ending at Cline Falls State Park. Another popular run begins at Cline Falls park and runs 11.5 miles (18.5 km) down river to the Lower Bridge Recreation Site. This run requires a portage around Cline Falls, which is located about a half mile down stream from the park.[10]

Cline Falls State Scenic Viewpoint is closed during the winter months. When it is open, there is no charge for using the park. Alcohol is not permitted in the park at any time. The ban on alcohol is enforced by the Deschutes County Sheriff’s Department.[4][5][8] Park facilities include:

On 22 June 1977, two undergraduate students from Yale University were attacked and badly injured in Cline Falls State Park. The two students were biking cross-country from Astoria, Oregon to the east coast. On the seventh day of their trip, they camped at Cline Falls State Park. In the middle of the night, a truck drove over their tent with the two campers inside. Then the driver got out of the truck and attacked the students with an axe. After striking them a number of times, the attacker stopped and drove away. Both students survived. However, their attacker was never caught. One of the survivors later wrote a book about the ordeal entitled Strange Piece of Paradise.[11][12]