Originally named Camp Woahink, the park was built by the Civilian Conservation Corps (CCC), and was later renamed in honor Jessie M. Honeyman (1852–1948) of Portland. As president of the Oregon Roadside Council, Honeyman worked with Samuel Boardman, Oregon's first Superintendent of State Parks in the 1920s and 1930s, to preserve Oregon coastal lands.

Several of the structures built by the CCC, including the camp store, three picnic shelters, and the administrative building, comprise the Jessie M. Honeyman Memorial State Park Historic District.[4] The campground was added in the 1950s. The Lake Woahink Seaplane Base is on Lake Woahink which is to the south and east of the park, and Camp Cleawox, a Girl Scout camp, is across Lake Cleawox and northwest of the park. 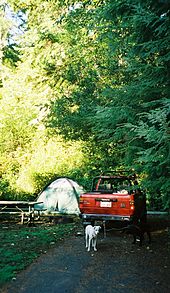 A camgsite in the park