Incidents resulting in at least three deaths are marked in bold. 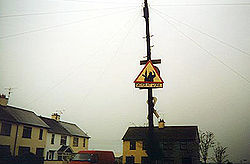 A Sniper at work sign, near Crossmaglen, warns British troops of the presence of the South Armagh Sniper.