The January 2008 tornado outbreak sequence was an unseasonably strong tornado outbreak that began on January 7, 2008 and continued for nearly four days, with the hardest hit area being southwestern Missouri, northwestern Arkansas and the surrounding area. In addition, a strong supercell in northern Illinois and southeastern Wisconsin produced that region's first January tornadoes since 1967.[2]

More tornadoes occurred across the Mississippi Valley on January 8 and after a break in the activity on January 9, another round of severe weather took place in the Southern United States (primarily Alabama and Mississippi) on January 10. Several damaging tornadoes were reported that day, although no one was killed. In total, over the four–day period, at least 74 tornadoes were confirmed and four people were killed.

An unseasonably warm air mass was entrenched over much of central and eastern North America with record highs for much of the region. Several record high temperatures were broken across several states and Canadian provinces from January 7 to January 9 as temperatures rose into the 70s (21-25°C) as far north as the Ohio Valley with dewpoints in the high 50s and low 60s (14-17°C) providing additional fuel for storm development.

In addition, many areas near the Great Lakes region reached the mid to upper 60s (17-20°C) which allowed the northern cells to form, while several areas in southern Ontario and Quebec near the Canada-US border reached near 60°F (16°C).[3][4] 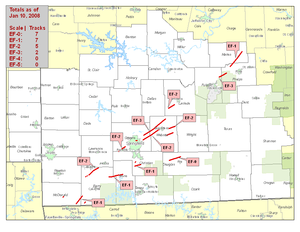 A strong low pressure area over the central Great Lakes and its associated cold front combined with intense wind shear to provide a favorable environment for supercell development.[5] Despite only moderate instability (which meant only a slight risk of severe weather was issued by the Storm Prediction Center, and only modest probabilities for severe weather at first[6]), supercells developed throughout the day over much of the central US and continued throughout the evening and overnight hours, continuing into the morning of January 8. The hardest-hit area was in the Ozarks, around Springfield, Missouri, where nearly continuous supercells developed throughout the evening, resulting in numerous tornado touchdowns. In addition to the tornadoes, hail larger than baseballs and damaging straight-line downburst winds as strong as 100 mph (160 km/h) were reported. At least three people were killed in Missouri as a result of the tornadoes. Two of these deaths occurred near Marshfield and there were also six injuries.[7]

Activity shifted across the Mid-Mississippi Valley on January 8 where tornado watches were issued across Arkansas and Tennessee and later extended across the Ohio Valley to near Columbus, Ohio and Dayton, Ohio until the early morning hours on January 9. A strong tornado in Pope County, Arkansas killed at least one person and additional tornadoes were reported just west of Memphis. During the day, most of the activity was formed into a line that extended from the Ohio Valley to Alabama although thunderstorm-related wind damage was reported as far north as upstate New York and western Pennsylvania.

After a lull in activity on January 9, a separate system across the Southern United States led to more severe weather, including tornadoes, on January 10. A moderate risk of severe weather was issued by the Storm Prediction Center. 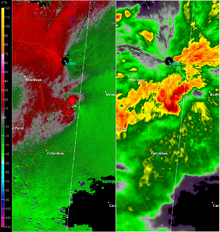 NEXRAD view of a supercell near Caledonia, Mississippi, displaying relative velocity on the left, and base reflectivity on the right. (Courtesy of NWS Jackson, Mississippi)

Storms developed across Louisiana and Mississippi during the morning and noon periods moving into Alabama with additional storms developing as far north as central and eastern Kentucky where a tornado watch was issued stretching down towards eastern Louisiana and later into Georgia. One particular storm produced several tornado reports across Attala County and near Starkville with some structural damage.

At around 2:20 PM CDT, a tornado warning was issued for Lamar County, Alabama after a report of significant structural damage was received in Caledonia, Mississippi in Lowndes County; a tornado was later spotted by the emergency management in the downtown Vernon, Alabama area. Additional tornadoes were reported from a storm that moved from southeastern Mississippi to north of Tuscaloosa later in the afternoon causing extensive damage in northeastern portion of Tuscaloosa County. More stable air farther east reduced the severe weather potential. Wintry weather including snow, sleet and freezing rain on the northern side of the storm was reported from Wisconsin to Maine on January 10–11. 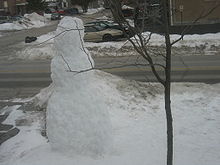 An image of a snowman taken three weeks prior to the melt.

The storm system was also responsible for heavy flooding rains across much of the Midwest from Michigan to Missouri as well as dense fog across Wisconsin, Ontario and Quebec which was caused by rapid snow melt stemming from the January thaw.[16] flooding was reported across several towns and roads which forced the evacuation of some residents. Record-breaking temperatures were reported all across Southern Ontario and surrounding areas.[17][18][19][20][21][22][23][24][25][26][27] The thick fog lead to numerous accidents including two pile-ups involving in total 100 vehicles on Interstate 90 near Madison, Wisconsin which killed at least two and injured dozens more while additional fatal accidents occurred elsewhere.[28] It also disrupted air travel across several airports.[29] Rainfall had exceeded locally 4 inches (100 mm) of rain from Missouri to Indiana and Michigan.

High winds and rain have battered Central, southern and eastern Ontario and southern and central Quebec on January 8, and 9. Power outages and wind damages were reported in some areas. As much as 140,000 Hydro One customers were without power in Ontario and at least 100,000 Hydro-Québec customers in Quebec. Winds were gusting in near on in excess of 100 km/h in some localities including the Greater Toronto Area while the highest peak being 133 km/h recorded near Sandbanks Provincial Park in Prince Edward County. One tractor trailer was overturned and nearly fell into the Saint Lawrence River on the Ogdensburg-Prescott International Bridge[30][31][32][33][34]