Covenant (biblical)
This article is about biblical covenants. For other uses, see Covenant (disambiguation).

A biblical covenant is an agreement found in the Bible between God and His people in which God makes specific promises and demands. It is the customary word used to translate the Hebrew word berith (ברית Tiberian Hebrew bərîṯ Standard Hebrew bərit) as it is used in the Tanakh 135 times (see appended list), thus it is important to all Abrahamic religions. The equivalent word in the Septuagint and the Greek New Testament is διαθήκη diatheke (Strong's G1242).

In theology and Biblical studies, the word "covenant" principally refers to any of a number of solemn agreements made between God and the children of Israel in the Hebrew Bible, as well as to the New Covenant, which some Christians consider to be the replacement or final fulfilment of these, see Supersessionism. Likewise, some Christians use the term Old Covenant to collectively refer to the covenants described in their "Old Testament", of which they hold different views. 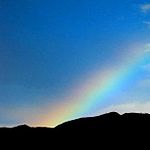 The Rainbow set as the symbol of the Covenant with Noah after the Great Flood of the Bible.
See also: Noahide Laws and Council of Jerusalem

The Noahic covenant[Gen 8-9] applies to the whole of humankind and to all living creatures. In this covenant, God:

On this topic, Jubilees [2] states:

And in the twenty-eighth jubilee [1324-1372 A.M.] Noah began to enjoin upon his sons' sons the ordinances and commandments, and all the judgments that he knew, and he exhorted his sons to observe righteousness, and to cover the shame of their flesh, and to bless their Creator, and honour father and mother, and love their neighbour, and guard their souls from fornication and uncleanness and all iniquity. For owing to these three things came the flood upon the earth ... For whoso sheddeth man's blood, and whoso eateth the blood of any flesh, shall all be destroyed from the earth.

The Abrahamic covenant, found in Genesis 12-17, is known as the Brit bein HaBetarim, the "Covenant Between the Parts" in Hebrew, and is a commandment for Brit milah in Judaism. The covenant was restated for the descendants of his son Isaac found in Genesis 17:2-9 and Deuteronomy 1:7-8.

According to the Documentary Hypothesis, in Genesis 12-17 three covenants can be distinguished based on the differing J, E, P, and D sources.[4] In Gen. 12 and 15, God grants Abram land and descendants but does not place any stipulations (unconditional). By contrast, Gen. 17 contains the covenant of circumcision (conditional).

The Abrahamic Covenant of Isaac did not pass to all the descendants of Isaac, however. From Isaac the Covenant passed to Jacob [Gen 27] and from Jacob the Covenant passed to Joseph [48:3-4]and then to his son Ephraim [48:17-19] so that while it was prophesied that the Messiah would come from Jacob's descendant Judah a.k.a. the Jewish people the birthright of many nations remained with Joseph's son Ephraim. [5:1-2] However the Ephraimites were defeated by the Assyrians in 556 BC and systematically dispersed throughout the Assyrian Empire (which included parts of the modern nations of Saudi Arabia, Egypt, Syria, Iraq, etc.) so that their modern day identity has been lost. Many groups have attempted to claim this identity, see Ten Lost Tribes, however, most of these groups in America, Britain and Australia do not correspond to the locations specified in the Abrahamic Covenant.

God appears to Jacob in a dream, and promises: 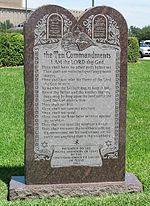 The Mosaic Covenant, beginning in Exodus 19-24, contains the foundations of the Torah. In this covenant, God promises:

As part of the terms of this covenant, God gives Moses the Ten Commandments. These will later be elaborated in the rest of the Pentateuch. The form of the covenant resembles the suzerainty treaty in the ancient Near East [5] but those are not matching exactly. Like the treaties, the Decalogue begins with Yahweh's identification and his doing for Israel ("who brought you out of the land of Egypt; Ex 20:2) as well as the stipulations commanding absolute loyalty ("You shall not have other gods apart from me"). Yet, unlike the suzerainty treaty, the Decalogue in the book of Exodus doesn't have any witness nor explicit blessings & curses.[6] The fullest account of the Mosaic covenant is given in the book of Deuteronomy

The Hebrew Bible contains two priestly covenants. One with the sons of Aaron, another specific covenant with Phinehas.

The Israel covenant[Deut. 29:1-29] [30:1-10] is a conditional covenant between God and the children of Israel. After warning that Israel will be dispersed among the nations, and conditional to Israel's repentance, return to God, and obedience to the Mosaic law. In regard to this covenant Israel and the Jewish people are referenced separately so that when God refers to Israel he is referring the descendants of Ephraim.[Jer 31:9-10] The Lord also says that he has chosen Israel over Judah i.e. the Jewish people in regard to the return to the land. [Jer 3:11-14] God promises:

Personal covenants or commitments abound in the Scriptures and are prominent in the Psalms. They may be prefaced with expressions such as "I will". One example is: "I will praise thee, O Lord, with my whole heart; I will shew forth all thy marvelous works."[Ps 9:1] Another is: "I will extol thee, my God, O king; and I will bless thy name for ever and ever. Every day will I bless thee; and I will praise thy name for ever and ever." [Ps 145:1-2]

The New Covenant in Christianity

The Writings of the New Testament

The Gospels: Luke tells of the birth of John the Baptist. His father, Zacharias, prophesied at the time. In his prophecy he says that God has remembered His holy covenant. The events at the beginning of the Christian story are connected to the covenant God made with Abraham. [8] Just before his crucifixion, Jesus celebrated the Passover with his disciples. All three of the synoptic gospels describe the special attention he gives to the bread and the wine. When he presents the wine to his disciples, he says that it is the blood of the covenant poured out for them.[9] Matthew explains that the pouring out of the blood was done for the forgiveness of sins. Luke calls it the new covenant.

The Book of Acts: Peter and John heal a crippled man. Peter speaks to the wondering crowd. He says they are the children of the covenant God made with their fathers and quotes the promise to Abraham, "And in thy seed shall all the kindreds of the earth be blessed." Peter tells them that God has sent the resurrected Jesus first to them to bless them and forgive them of their sins. He proclaims Jesus to be the covenant "seed" promised to Abraham. [10]

Epistle to the Romans: Paul addresses God's covenantal relationship with the Jewish people. [11] He states emphatically that God has not rejected the Jewish people. To drive home his point, he recalls the time when Elijah felt all alone in his service to God. God assured Elijah that he wasn't alone, that there were 7000 that had not bowed the knee to Baal. [12] Paul says that the Jewish people's rejection of Christ was a stumbling but not a falling. [13] He writes that the Jewish rejection has opened the way for the Gentiles to be saved. Paul considers this turn of events to be a great blessing for the Gentiles. He then asks, if this Jewish failure to accept Christ brought such blessings to the world, what greater blessings will come when the Jewish people finally join the fellowship. [14]

Christian views of the New Covenant

The Christian New Covenant involves the theological concept of a new relationship between God and humans mediated by Jesus. This new relationship is available to all people,[15] both Jews and Gentiles.

The only reference in the Hebrew Bible that uses the wording "new covenant" is found in the Book of Jeremiah, Chapters 30-33 (God's promise of restoration), Chapter 31, Verses 31-34:

This prophet's word refers to the birth of Jesus Christ and his atonement on the cross (Matthew 26:28), as well as the expounding of proper interpretation of the law, based on principle rather than rule (Matthew 21-48).

Remember We made the House a place of assembly for men and a place of safety; and take ye the station of Abraham as a place of prayer; and We Covenanted with Abraham and Isma'il, that they should sanctify My House for those who compass it round, or use it as a retreat, or bow, or prostrate themselves (therein in prayer).[Quran 2:125]