Keg
This article is about the metal container. For the drum, see music of the Virgin Islands. For beer which is served from a pressurized keg, see Keg beer. 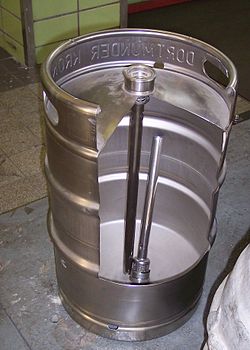 A keg is a small barrel.

Traditionally, a wooden keg is made by a cooper used to transport items such as nails, gunpowder.[1], and a variety of liquids.

More recently, a keg is often constructed of aluminum or steel. It is commonly used to store, transport, and serve beer. Other alcoholic or non-alcoholic drinks, carbonated or non-carbonated, may be housed in a keg as well. Such liquids are generally kept under pressure.

Beer kegs are made of stainless steel, or less commonly, of aluminium. A keg has a single opening on one end. A tube called a "spear" extends from the opening to the other end. There is a self-closing valve that is opened by the coupling fitting which is attached when the keg is tapped. There is also an opening at the top of the spear that allows gas (usually carbon dioxide) to drive the beer out of the keg. The coupling fitting has one or two valves that control the flow of beer out of and gas into the keg. The keg must be in the upright position, that is, with the opening on top for the beer to be dispensed. Kegs can be contrasted to casks, which have two or more openings and no spear.[2]

Historically a beer barrel was a standard size of 50 gallons, as opposed to a wine barrel at 32 gallons, or an oil barrel at 42 gallons. Over the years barrel sizes have evolved and breweries throughout the world use different sized containers. Even when the content capacity of two kegs are equal - e.g. metricized to 50 liter - the keg shape and keg tap system may differ heavily.

Since keg sizes are not standardized, the keg cannot be used as a standard unit of measure for liquid volumes. This size standard varies from country to country and brewery to brewery with many countries using the metric system rather than U.S. gallons.

A full keg is a 15.5 U.S. gallon barrel, routinely called a half-barrel. A Quarter Barrel has a volume of 7.75 U.S. gallons. Generally a keg is a vessel smaller than a barrel; thus, it is 30 gallons or smaller.[3]

In the U.S. the terms half-barrel and quarter-barrel are derived from the fact that a U.S. beer barrel is legally defined as being equal to 31 U.S. gallons[4] (note that this is not the same volume as some other units commonly known as barrels). A 15.5 U.S. gallon keg is also equal to:

However, beer kegs can come in many sizes:

In European countries the most common keg size is 50 liters - this includes the UK with its non-metric keg system where the standard keg of 11 imperial gallons is almost exactly the size of 50 liters in the metric system. The German DIN 6647-1 and DIN 6647-2 have also defined Kegs in the sizes of 30 and 20 liters. A newer Euro regulation defines 50, 30, 25 and 20 liters where the Keg shape is usually thicker but less tall than the German keg specifications.[citation needed]

In some areas it is common to refer to the size not in liters but in beers. In areas where the standard beer size is 0.5 liters (e.g. Germany) that makes a 50 liter keg to be 100 beers.[citation needed]

Specifications for a U.S. 1/2 barrel keg

Accepted specifications for a standard keg are:[5]

There are two different types of tapping equipment that are available for kegs, party pumps and gas taps. Party pumps utilize outside air, which introduces bacteria inside the keg and will certainly introduce oxygen, which will cause the beer to oxidize, creating a wet cardboard taste, therefore reducing the quality of the beer. Kegs operating a party pump should be used within 18–24 hours otherwise the beer may become unpalatable. Gas pumps normally use CO2, but certain brewers require a mix of other gases (Guinness requires 25% CO2 and 75% nitrogen). Gas pumps can preserve a keg up to 120 days with proper refrigeration.

As with any pressurized container, a keg can cause injury, even at normal operating pressure, whether with compressed air or carbon dioxide:

"The tapping system and pressure regulator both should be equipped with a pressure relief (blow off) device. If you are not familiar with tapping equipment, consult your retailer..." (printed on an Anheuser-Busch's keg cap)

Generally, in the US and Australia kegs or the beer coil are kept in a bucket of ice and/or water, in order to keep the beer cool.

Other types of kegs

A cornelius keg (also known as a Corney or soda keg) was originally used by the soft drink industry, now commonly used to store and dispense beer, especially homebrewed.

Cornelius kegs were originally made by the IMI Cornelius Company. Since the arrival of newer technology such as Bag-In-Box (BIB) packages soft drink bottlers have mostly abandoned their Cornelius kegs, often making them available to hobbyists 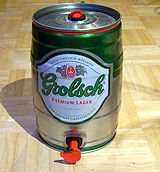 The mini keg is a 5-liter keg produced for retail sales. Some brands come with a spout and pour from the bottom via gravity, while others may use a low cost pressurized tap. Mini kegs are typically not returned to the manufacturer for cleaning and refilling. The kegs, being made of aluminum, may be recycled.

In Canada, Molson brewery dubbed the mini keg "Bubba". This name has now been genericized to generally apply to all 5-liter mini kegs in Canada. This might cause confusion, as a company called Bubba Keg is established in the U.S., and appears to not be associated with Molson.

Another type of mini keg is the "beer ball" or the "party ball", a disposable plastic ball that usually holds around 5.2 gallons, roughly the equivalent of 55 twelve-ounce beers, though they can also be found in a smaller 3.8 gallon size. Like kegs, it is necessary to tap the ball before the beer inside can be served.

Another type of keg is the "oneway keg" which is now available in most global markets. Ecokeg, an Australian invention, provides one way kegs that are mostly recyclable and much lighter than steel kegs. They provide kegs in 30L and 38L sizes only with two outer options plastic or reinforced cardboard BoxKeg.[6] The PubKeg, manufactured by Rehrig Pacific Company, is another oneway keg available on the market. The PubKeg comes in a 20 L size and is completely recyclable.[7] Other oneway kegs on the market are keykeg and Schaeffer aluminium keg.

A quarter barrel, more commonly known as pony keg is a beer vessel containing approximately 7.75 U.S. gallons (29.33 liters) of fluid. It is half the size of the standard beer keg and equivalent to a quarter of a barrel. It will serve roughly 82 twelve ounce cups. The shape of a pony keg resembles that of a full-sized keg, while being much easier to move manually. However, it shares many inconveniences with the bigger kegs, such as: often requiring a deposit when purchased; needing a tap to serve the contents; and posing difficulties in determining the amount of beer remaining (weighing the keg or observing its buoyancy are common techniques). Despite this, a pony keg can be a cheap way to provide beer for a medium-sized party. 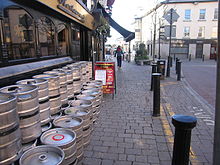 88-pint beer kegs lined up outside a pub in Portlaoise, Ireland

The beer vessel supply structure in the UK and Ireland is quite different, whilst the couplers for kegs have been largely standardised to sankey, grundy and interbrew, a couple of others exist such as UEC and U-Type; however these are much less common. The kegs themselves are either steel or increasingly the more lightweight aluminum variety. The standard keg size is 11 imperial gallons (50 liter/88 imperial pints approx) and the vast majority of keg beers are supplied in this keg size. There are also smaller 30 liter (54 imperial pints approx) kegs usually reserved for more specialist and or premium European beers.

For bars that sell an excessive volume of beer there is the 36 imperial gallon (150 liter/260 imperial pint) keg, however due to its very large size few people can move them making it an impractical choice.

In the U.S. as of 2005, there are 21 states and numerous localities that have keg registration laws. The laws vary widely in terms of whom they target, what their intended purpose is, and how strongly they are enforced. Most major breweries now use internally speared kegs.

Scotland requires a dye to be used in drip trays to prevent the resale of beer from the drip tray; many health departments elsewhere still recommend its use.[citation needed]