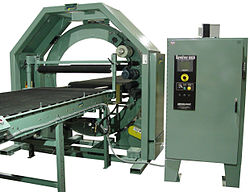 Orbital stretch wrapping is a means of applying stretch film to a load consisting of a roll of stretch wrap supported on a vertical rotating ring and a means of passing a load through the ring's eye horizontally.

The load is either suspended within the rotating ring by hand or machinery or rests on a conveyor as it moves through. Stretch is achieved by creating tension between the load and film roll using a brake or gear ratio system.