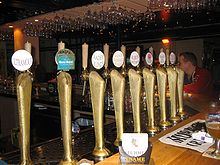 Draught beer fonts at the Delirium Café in Brussels

Draught beer (Draft beer in U.S.) is beer served from a cask or a pressurised keg.

Until Joseph Bramah patented the beer engine in 1785, beer was served directly from the barrel and carried to the customer. The Old English word for carry was dragen which developed into a series of related words, including drag, draw, and draught. By extension, the word for carrying or drawing a beer came to mean the serving of the beer and, in some senses, the act of drinking, or a drink of beer itself, regardless of serving method. By the time Bramah's beer pumps became popular, the use of the word draught to mean the act of serving beer was well established and transferred easily to beer served via the hand pumps.

In 1691, an article in the London Gazette mentioned John Lofting, who held a patent for a fire engine: "The said patentee has also projected a very useful engine for starting of beer, and other liquors which will draw from 20 to 30 barrels an hour, which are completely fixed with brass joints and screws at reasonable rates".

In the early 20th century, serving draught beer from pressurised containers began. Artificial carbonation was introduced in the United Kingdom in 1936, with Watney’s experimental pasteurised beer Red Barrel. Though this method of serving beer did not take hold in the U.K. until the late 1950s, it did become the favoured method in the rest of Europe, where it is known by such terms as en pression. The method of serving beer under pressure then spread to the rest of the world; by the early 1970s, draught beer was almost exclusively beer served under pressure.

Shortly after a British consumer organisation called the Campaign for Real Ale (CAMRA) was founded, in 1971, to protect unpressurised beer, the group devised the term real ale to differentiate between beer served from the cask and beer served under pressure. By 2004, the term real ale had been expanded to include bottle-conditioned beer, while the term cask ale had become the accepted global term to indicate a beer not served under pressure.

Keg beer is a term for beer which is served from a pressurized keg. While often considered synonymous to draught beer, keg beer refers specifically to beer served under pressure, while draught beer may refer to any beer served from a larger container, including both keg beer and cask ale. Keg beer is often filtered and/or pasteurized, both of which are processes that render the yeast inactive, increasing the shelf life of the product.

In brewing parlance, a keg is different from a cask. A cask has a tap hole near the edge of the top, and a spile hole on the side used for conditioning the unfiltered and unpasteurised beer. A keg has a single opening in the center of the top to which a flow pipe is attached. Kegs are artificially pressurised after fermentation with carbon dioxide or a mixture of carbon dioxide and nitrogen gas.

Keg has become a term of contempt used by some, particularly in Britain, since the 1960s when pasteurised draught beers started replacing traditional cask beers.

In modern beer dispensing, a metal keg is pressurised with carbon dioxide (CO2) gas or nitrogen (N2) gas or a combination of both. Pressure in the keg drives the beer to the dispensing tap, or faucet.

Pressurised CO2 in the keg's headspace maintains carbonation in the beer. The CO2 pressure varies depending on the amount of CO2 already in the beer and the keg storage temperature. Occasionally the CO2 gas is blended with nitrogen gas. CO2 / nitrogen blends are used to allow a higher operating pressure in complex dispense systems.

Nitrogen is used under high pressure when dispensing dry stouts (such as Guinness) and other creamy beers because it displaces CO2 to (artificially) form a rich tight head and a less carbonated taste. This makes the beer feel smooth on the palate and gives a foamy appearance. Premixed bottled gas for creamy beers is usually 75% nitrogen and 25% CO2. This premixed gas which only works well with creamy beers is often referred to as Guinness Gas, Beer Gas, or Aligal. Using "Beer Gas" with other beer styles can cause the last 5% to 10% of the beer in each keg to taste very flat and lifeless.

Cask and kegged beer should be stored at 12°C (54°F). Once a cask or keg is opened it should be consumed within 3 days. Keg beer is given additional cooling just prior to being served either by flash coolers or a remote cooler in the cellar. This chills the beer down to temperatures between 3°C and 8°C. Cask beer is served at the cellar temperature of 12°C. In the UK, the term keg beer would imply the beer is pasteurized, in contrast to unpasteurized cask beer. Some of the newer microbreweries may offer a nitro keg stout which is filtered but not pasteurized.

Smooth flow (also known as cream flow, nitrokeg, or just smooth) is the name brewers give to beers pressurized with a partial nitrogen gas blend.

The words "draft" and "draught" have been used as marketing terms to describe canned or bottled beers, implying that they taste and appear like beers from a keg. Two examples are Miller Genuine Draft, a pale lager which is produced using a patented cold filtering system, and Guinness stout in patented "Draught-flow" cans and bottles. Guinness is an example of beers that use a nitrogen widget to create a smooth beer with a very dense head. Guinness has recently replaced the widget system from their bottled "draught" beer with a coating of cellulose fibers on the inside of the bottle. However the widget is still available in cans of Guinness draught. Statements indicate a new development in bottling technology enables the mixture of nitrogen and carbon dioxide to be present in the beer without using a widget, making it as Guinness says, "more drinkable" from the bottle.

In some countries such as Japan, the term "draft" applied to canned or bottled beer indicates that the beer is not pasteurised (though it may be filtered), giving it a fresher taste but shorter shelf life than conventional packaged beers.