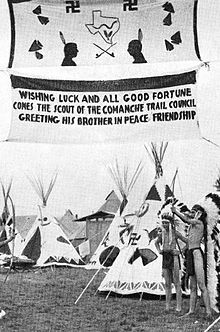 Scouting in Texas has a long history, from the 1910s to the present day, serving thousands of youth in programs that suit the environment in which they live. Scouting, also known as the Scout Movement, is a worldwide youth movement with the stated aim of supporting young people in their physical, mental and spiritual development, so that they may play constructive roles in society.

Scouting for girls in Texas is primarily represented by the Girl Scouts of the USA, organized into eight local councils.

Scouting in Texas unofficially dates to the publication of British lieutenant general Robert Baden-Powell's popular book, Scouting for Boys, in 1908. Even before a national organization had been started, groups of boys began Scout activities in troops and small groups in 1908, 1909, and 1910. The claims of several troops to be the first organized in Texas, whether before or after the incorporation of the Boy Scouts of America on February 8, 1910, are difficult to verify. BSA archives do show that the thirty-seventh registered scoutmaster in the country was a Texan, Rev. George W. Sheafor, of Comanche, in 1910.[1]

In 1914, the BSA gave local councils the power to segregate African Americans from white Scouts. Until 1974, some southern councils of the Boy Scouts of America were still racially segregated.

However, an African American troop was formed in Port Arthur as early as 1916. The BSA report to Congress for 1930 named Dallas as one of the southern cities in which scouting was growing in the black community. Hispanic boys were also active in scouting, often in units with non-Hispanic boys. Jewish youth had been active in scouting in San Antonio for many years before a synagogue sponsored a troop for them in 1924.[1]

The BSA national office was moved to Irving in 1979.

The Girl Scouts of San Jacinto Council traces its roots back to the 1920s when Frances Mann Law and Corrinne Fonde organized a Girl Scout Council in Houston.[2] The council office was in a three roomed cottage.

Most Girl Scouts of the USA units were originally segregated by race according to state and local laws and customs. The first troop for Mexican Americans was formed in Houston in 1922. In 1936, the first African American Girl Scout troop west of the Mississippi was formed in Texas.

The Girls Scouts' Camp Texlake was dedicated in 1949.

Boy Scouts of America in Texas

Texas is home to the BSA National Headquarters in Irving, Texas. The National Scouting Museum is also located in Irving.

There are twenty Boy Scouts of America local councils in Texas. All of Texas lies within the Southern Region, except for El Paso, Hudspeth and Parmer Counties, which are part of Western Region.

These ten are no longer have their old names, except Galaxy. Beginning February 2009, each received it's new name:

The Circle Ten Council serves BSA units in North Texas and a portion of Oklahoma. Its service area encompasses all or parts of Collin, Dallas, Ellis, Fannin, Grayson, Henderson, Hunt, Kaufman, Navarro, Rains, Rockwall and Van Zandt Counties in Texas as well as Bryan County in Oklahoma. Founded in 1910 and based in Dallas, approximately 70,000 youth and 10,000 adults participate in Scouting through the council each year. The council has six camps; the Order of the Arrow is represented by Mikanakawa Lodge.

The Conquistador Council (No. 413), with its office in Roswell, New Mexico, primarily oversees BSA units in southeast New Mexico. However, Parmer County, Texas is included in the council territory because of its proximity to Clovis, New Mexico. There are currently no units actually chartered in Parmer County. The area is part of El Llano Grande District. The Kwahadi Lodge #78 of the Order of the Arrow serves local Arrowmen.

The Golden Spread Council serves Scouts in the Panhandles of Texas and Oklahoma. Its service area includes all or part of 23 counties in Texas and three counties in Oklahoma.

The Longhorn Council serves Scouts in a 23 county area of North Texas and Central Texas. Its headquarters is in Hurst (near Fort Worth), with an additional service center in Waco. The Council is organized into 20 districts:

Camp Perkins, a gift from Mr. & Mrs. J. J. Perkins, is a primary campsite for the council. It is about 60 acres (240,000 m2) of camp grounds utilized by Northwest Texas Council as well as units of other councils chartering with them.

This council is one of 300 geographic council in the Boy Scouts of America. Scouting in the southern most parts of Texas, has provided the values that young people have need in the border town of the Rio Grande valley since 1926.

Camp Perry was established in 1927 and has continuously operated as a Boy Scout Camp longer than any other such camp in Texas. Situated on the banks of the Arroyo Colorado, it covers over 260 acres (1.1 km2). There are twelve campsites at Camp Perry.

Houston Scouts have an international relationship with Scouts in Chiba, Japan.

Other scouting associations for boys in Texas

Girl Scouts of the USA in Texas 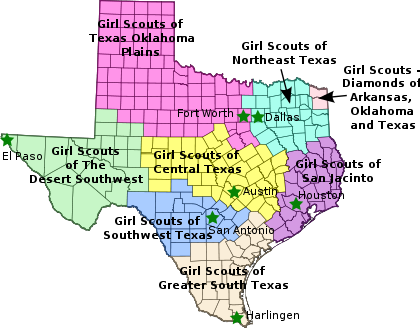 There are 8 Girl Scout councils in Texas.

Camp Texlake comprises 455 acres (1.84 km2) on Lake Travis. It was assigned to the former Girl Scouts — Lone Star Council by the Lower Colorado River Authority, and was dedicated on July 17, 1949. That summer nearly 400 girls attended camp. The dining facility overlooks Lake Travis itself. The council houses ten horses at this site as well as encouraging watersports. The camp can accommodate 335 overnight guests in a variety of situations.

Camp Wood Lake is on the shores of Lake Brownwood.

Camp Kachina is on the shores of Lake Belton. It covers a total of 344 acres (1.39 km2). Facilities include an equestrian center and an archery course.

Camp Mitre Peak is located in the Davis Mountains between Alpine and Fort Davis. There are three cabins, known as Kickapoo, Apache, and Seminole, located in Fern Canyon. There are also three tent units: Mescalero, Tonkawa, and Chippewa. These have views of Mitre Peak. The Janice Hill Mathews Amphitheater seats over 200 people and campfires are held here. The Pamela Catherine Haas Horseback Riding Arena, nicknamed Rebel Arena, gives girls the opportunity to participate in western riding and trail riding programs. The Laura Van Pelt Complex supports indoor activities. The complex consists of a pavilion and an educational building. The latter includes a kitchen and a darkroom. Alumni and supporters of the camp can join Troop Mitre.

Formed by the merger of Girl Scouts Paisano Council and Girl Scouts — Tip of Texas Council in 2007.

New council formed by the merger of Cross Timbers, Red River Valley, and Tejas Councils. 42,761 girls are in this council, 61% of which are in troops. This council serves girls in 32 counties. The first troop in the Dallas area was formed in December 1920.

The Program Place and Goodykoontz Museum of Girl Scout History opened in 2007. It is situated next to the headquarters building and is intended to function in harmony with the headquarters on the shared site. The Program Place includes a library, theater, Girl Scout shop, stage, café and a lounge for older girls, as well as a park with fire pit. The Goodykoontz Museum of Girl Scout History, in the same building, features a timeline from the start of the council in the 1920s until the present, and interactive displays. The building acquisition and renovation cost $5.6 million.[3] The entrance canopy of the Program Place was designed and built by University of Houston graduate architecture students.[4] The pavilion was represents a Girl Scout sash.[5]

There are ten camps run by the council. Three of these form the Treelake Complex, a series of connected camps. Trails allow Girl Scouts to hike from Camp Misty Meadows to Camp Silver Springs via Camp Agnes Arnold.[6]

Camp Camwood covers 100 acres (0.40 km2) in Hockley. It is only operational during the daytime.

Camp Casa Mare is a year-round camping facility for Girl Scouts ages 8–17 years old. It is located on Galveston Bay in Seabrook, Texas and under ownership of the Girl Scouts San Jacinto Council. Camp Casa Mare was founded in 1958[9] and has offered sailing programs, aquatics, and sporting activities, not to mention performing arts and academic classes. Fencing is also offered to campers at this site.

The Galveston Boat Club (GBC) is a two storey building on Galveston Island. Visitors sleep on the floor on the second storey. Adult leaders can be accommodated in a separate small building. The GBC is in a residential area. Visitors primarily use the GBC to visit the island's attractions.

Camp Misty Meadows is a 328-acre (1.33 km2) wooded camp located in Conroe. The main attraction of this camp is its horse riding facilities. In 2007, there was a herd of forty horses. Visitors sleep in cabins or dormitories.

Camp Robinwood is a 206-acre (0.83 km2) camp in Willis. Campers are accommodated in platform tents, cabins or dorms. Swimming and canoeing is conducted on Lake Ann, a reservoir. There is also an outdoor swimming pool.

Camp Whispering Pines is a 93-acre (380,000 m2) site located in Garrison. Swimming, canoeing and rope assisted hill climbing are all on offer at this site.

Camp Wind-A-Mere is located in Alvin. The Tejas unit had two teepees. These were destroyed in Hurricane Ike, but will be replaced. The Caddo unit has platform tents. Pine Meadows and the Chickasaw site are camping areas. During Hurricane Ike, a great oak tree fell on the lodge and half the building was declared unsafe and unrepairable.[10]

Girl Scouts of Southwest Texas serves more than 19,000 girls and was established in 2007 from the San Antonio Area council plus a large section of the old El Camino council.

Girl Scouts of Texas Oklahoma Plains serves over 24,000 girls and 9,000 adult volunteers. It was formed by the merger in January 2008 of Girl Scouts of Caprock Council, Girl Scouts-Five Star Council, and Girl Scouts, Norcentex Council.