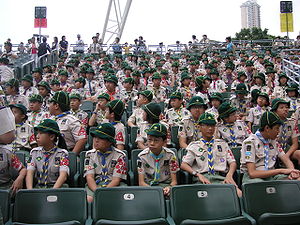 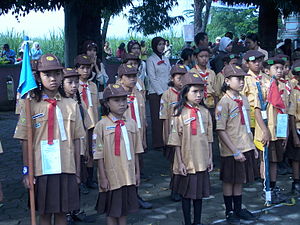 A Cub Scout is a member of the section of the worldwide Scouting movement for young persons, mainly boys normally aged about 7 to 11. In some countries they are known by their original name of Wolf Cubs and are often referred to simply as Cubs. The movement is often referred to simply as Cubbing. Originally, like the Boy Scouts, the Cub Scouts were open only to boys; girls were expected to join the Brownies. Since about 1990 the Cubs has been open to both girls and boys in several countries, but in the United States, it is still exclusively for boys. Some countries also have a Sea Scout version of Cub Scouts.[1] 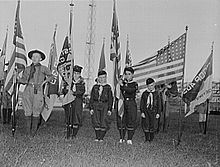 The Cub Scouting movement was founded by Robert Baden-Powell in 1916, nine years after the foundation of the Scouts, in order to cater to the many younger boys who had not yet reached the age limit for the Boy Scouts but who wanted to take part in Scouting. During these first ten years many troops had either allowed younger boys to join or had set up unofficial Junior or Cadet Scout Troops. These Cadet Troops taught a much simpler form of Scouting, including just the basic knotting techniques, basic first aid and tracking. In 1914, there were articles in the Headquarters’ Gazette (a then regular newsletter to leaders) outlining an official scheme, however this was not what Baden-Powell wanted. Rather he sought something quite different — a movement in its own right, with its own identity and program.

In 1914 Baden Powell announced a Junior Section for Scouting. In 1916, he published his own outlines for such a scheme, it was to be called Wolf Cubbing. It has been speculated that Baden-Powell may have had a number of reasons to call this section Wolf Cubs. Wolf was one of the ranks some Native American tribes gave to their best scouts; Wolf was the name of the cannon made in the railway workshops at Mafeking. So a young boy not old enough to be a wolf or true Scout could be a baby wolf or Wolf Cub.

Baden-Powell asked his friend Rudyard Kipling for the use of his Jungle Book history and universe as a motivational frame in cub scouting. Baden-Powell wrote a new book, The Wolf Cub's Handbook, for junior members. In 1917, junior members became known as Wolf Cubs.

In the 1960s and later, the Wolf Cub section departed in many organizations from the jungle theme. Some changed their name to Cub Scout or something similar but retained the Jungle Stories and Cub ceremony as tradition—such as the use of Jungle Books names (as described below); and the Grand Howl which signals the start and end of the Cub Scout Meetings. Other organizations kept the name but changed the theme totally. 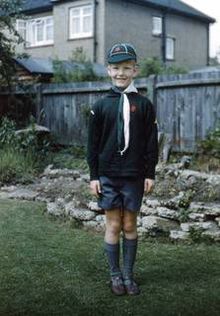 Originally, Cub Scout membership was open only to boys while the Brownies were set up as a parallel section for young girls. This remains the situation in some places. Most member organizations of World Organization of the Scout Movement (WOSM) admitted girls to the Cub Scouts while others have separate co-ed sections with a different theme. Most member organizations of the Union Internationale des Guides et Scouts d'Europe (UIGSE) have two single sex sections both named Wolf Cubs and both in the jungle theme.

Cub Scouts are organized in Packs, which are usually linked to a Scout group, providing a community with all age sections. Adult leaders of Cub packs take the names of The Jungle Book 's main characters. In many countries the leader of the Pack is called Akela. Cub Scouts have a distinctive two-finger salute according to the Jungle theme, in contrast to the three-finger salute of Boy Scouts. However, in the Scout Association of United Kingdom (UK) and some of its overseas branches, the two-finger salute was later replaced by the three-finger salute when they detached from the Jungle theme. Historically, Cub Scouts wear a distinctive headdress, which is a tight-fitting green felt cap with green felt visor, yellow pipings, and an emblem at the front — although in some countries this has been replaced by more contemporary headgear.

Like Scout Troops, Cub Scouts are assigned to small teams within the Pack. Baden-Powell named the team Six, which refers to the six members in each team. In most countries the members of a Six are from all Cub Scout-ages with the oldest as sixer ("leader"). In the Boy Scouts of America (BSA), these teams are each called a Den, and each Den has all boys in the same school grade.

Youth Leaders from more senior Sections of Scouting are actively encouraged to assist as Cub Scout Leaders. In the UK and in Australia these were originally called Cub Instructors. Within Scouts Australia the term Youth Helper is now formally applied to such persons, whilst in the United Kingdom they are called Young Leaders. In Canada, a Scout who assists in the Cub program is designated as a Kim. In the United States, the term Den Chief is used.

In many European countries (especially where the Jungle theme still has a strong part in the programme), Saint Francis of Assisi is the patron saint of Cub Scouts, because of his relationship with wolves. 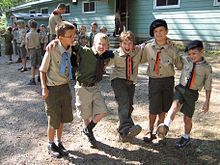 The emphasis of Cub Scouting is to have fun and learn at the same time. A Cub Scout gets satisfaction from meeting challenges, having friends, feeling good about himself, and feeling he is important to other people. Cub Scouts learn new things, discover and master new skills, gain self-confidence, and develop strong friendships. A Cub Scout learns the basics of the Scout method, a simple version of the Scout Promise, and a simple version of the Scout Law. Common ways to implement the Scout method include spending time together in small groups with shared experiences, rituals, and activities. Cultivating a love and appreciation of the outdoors and outdoor activities are key elements. Primary activities include games, camping, woodcraft, first aid, aquatics, hiking and sports. Each Pack has a number of annual events at Group or District level and can join nationwide events at pack level such as the Pinewood derby in the USA. Camping most often occurs on a unit level, such as in the pack, but sometimes at Group or District level. For many Cub Scout and Scouters, the highlight of the year is spending up to a week in the summer as part of an outdoor activity. They can stay in a lodge, cabin or tent.

Cub Scouts, like the Boy Scouts, uses a ranking system. But unlike its older counterpart, the ranks are often dependent upon age or grade level. The particular form that the training takes varies in different countries.

Cubs in member organizations of WOSM 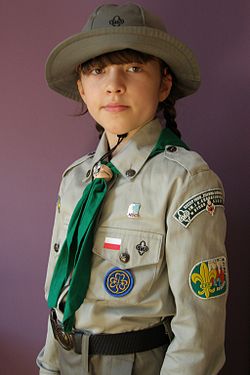 In Scouts Australia, the Cub Scout program is open to all children (girls and boys) ages 7.5-11.[2] The uniform is a navy-blue, button-up or polo-style, short sleeved shirt with a yellow collar, sleeves and shoulders. Sixers wear an oblong strip on their uniform. If the sixer is away, a second comes in charge, but if the sixer is inside the pack the second will act as an assistant or helper.

In Pfadfinder und Pfadfinderinnen Österreichs Cub Scouting is the section for children in the age of 7 to 10. The jungle theme is the symbolic framework. The first pack was started in autumn of 1920 in Vienna. At the beginning there were different symbolic frameworks: red Indians (taken from “Kibbo Kift” written by John Hargrave) and Robinson Crusoe. In the thirties the Jungle theme was introduced.

In 1916, the Wolf Cub program was introduced as part of Scouts Canada with a programme similar to that of the UK. Wolf Cubs is open to youth of both sexes, ages 8 to 10 inclusive. Sixes wear a coloured triangular patch, rather than a distinctive woggle. (If brown, for example, the six is known as Brown Six.) The Cub motto is "Do Your Best".

The tradition of Cub Scouting in Hong Kong was inherited from the British. It is the largest section of the Scout Movement in Hong Kong. A Pack is headed by a Cub Scout Leader (團長), with several Assistant Cub Scout Leaders (副團長) and Instructors (教練員). The division within a Pack is called a Six (小隊). Each Six has a Sixer (隊長) and a Seconder (隊副 or 副隊長). Each Six is distinguished by a colour and is named after it. Each member of the Six wears a woggle with the colour of his Six. The Promise and Law for the Cub Scouts are simplified from those for Scouts. Traditionally, the logo of the Wolf Cub denotes the Cub Scouts, but it is rarely used.[3][4]

In Ireland, the section is known as both Cub Scouts and Macaoimh, depending on the tradition from which the particular scout troop comes.

The jungle theme is the symbolic framework of the Welpen (Cubs). Welpen wear green uniforms. Among a "horde" of Cub Scouts, the cubs are divided in to nesten ("litters"). Each nest has a Gids (Guide) and a Helper. Like all sections Welpen is open to both boys and girls, but Scout Groups can have single-sex sections. Starting 2010 the symbolic framework of the Welpen will be based on a modified version of the Jungle Book with two main characters: the boy Mowgli and the girl Shanti. The new Welpen section will gradually replace the four sections in the age group Scouting Nederland had before: Welpen, Kabouters (Brownies), Dolfijnen ("Dolphins") and Esta's. Dolfijnen has a water based symbolic framework, Esta's has a special developed co-ed symbolic framework. The new Welpen contains elements from all four previous sections.

In Singapore, the junior section of the Scouting movement was known as the Cadet Scouts, until 2005 when it was renamed to Cub Scouts in line with international practice.

In the Scout Association, Sixes are led by a 'Sixer' and have a 'Seconder' as a backup. The Sixer wears two stripes on his/her uniform and the Seconder one stripe. When a Cub Scout is made a Sixer, the Second's badge (with one stripe) should be removed and replaced with the Sixer's badge. The members of a six are distinguished by the colour of the woggle they wear on their Group neckerchief (known elsewhere as a Group scarf).

An American Cub Scout in full uniform in 1968

The Cub Scouts are a division of the Boy Scouts of America (BSA). It is a family program designed for boys who are in the first grade through fifth grade. Parents, leaders, and organizations work together to achieve the purposes of Cub Scouting. Families are a core part of Cub Scouts and are included in many activities. Currently, Cub Scouting is the largest of the BSA's three membership divisions.[6]

The Baden-Powell Scouts' Association operate a 'Wolf Cub' section between Beavers and Scouts. Wolf Cub packs are themed on "The Jungle Book" by Rudyard Kipling, a friend of Baden-Powell. Wolf Cub packs are divided into Sixes, with each six being identified by a coloured triangular patch on the member's arm. Each Six is led by a 'Sixer' and a 'Seconder', who have their rank indicated by horizontal yellow stripes sewn onto their left arm.[7]

The British Boy Scouts and British Girl Scouts Association allow use of the Wolf Cubs program as an alternative to its Junior Scout section.[8]