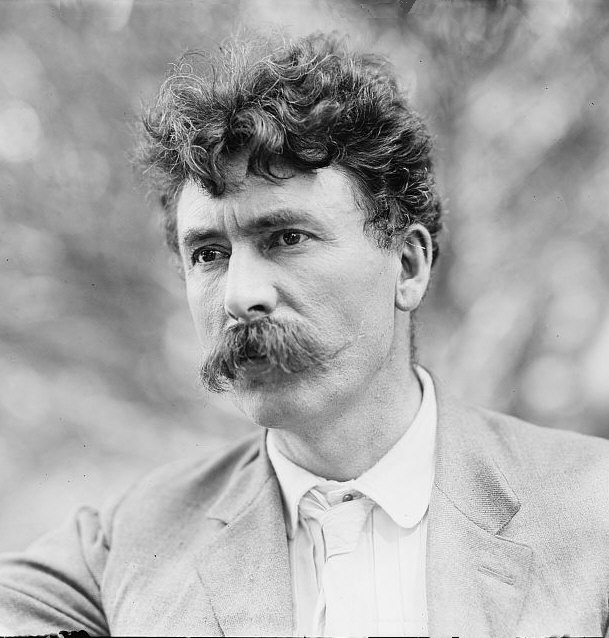 Ernest Thompson Seton ( - ) was a Scots-Canadian (and naturalized U.S. citizen) who became a noted author, wildlife artist, founder of the , and founding pioneer of the (BSA). Seton also heavily influenced Lord Baden-Powell, the founder of . His notable books related to Scouting include "The Birch Bark Roll" and "The Boy Scout Handbook". He is responsible for the strong influence of American Indian culture in the BSA.

He later rejected his father and changed his name to Ernest Thompson Seton. He believed that Seton had been an important name in his paternal line. He developed a fascination with wolves while working as a naturalist for . He became successful as a writer, artist and naturalist, later moving to to further his career. Seton later lived at Wyndygoul an estate that he built in Cos Cob, a section of Greenwich, . After experiencing vandalism by the local youth, Seton invited them to his estate for a weekend where he told stories of the American Indians and of nature. [cite web | last = | first = | authorlink = | coauthors = | year = | url =http://www.etsetoninstitute.org/WOODCRFT.HTM | title =Woodcraft League Histories | format = | work =Ernest Thompson Seton Institute | publisher = | accessdaymonth =11 July | accessyear =2006 ]

He formed the in 1902 and invited the local youth to join. The stories became a series of articles written for the "Ladies Home Journal" and were eventually collected in the "The Birch Bark Roll of the Woodcraft Indians" in 1906.

He was married twice. The first marriage was to Grace Gallatin in 1896. Their only daughter, Ann, was born in 1904 and died in 1990. Ann, who later changed her first name, became a best-selling author of historical and biographical novels as . According to her introduction to the novel "", both of her parents were practicing Theosophists. Ernest and Grace divorced in 1935, and Ernest soon married Julia M. Buttree. Julia would write works by herself and with Ernest. They did not have any children, but did adopt an infant daughter, Beulah (Dee) Seton (later Dee Seton Barber), in 1938. Dee Seton Barber died in 2006.

Seton met 's founder, Lord Baden-Powell, in 1906. Baden-Powell had read Seton's book, "The Birch Bark Roll of the Woodcraft Indians", and was greatly intrigued by it. The pair met and shared ideas.Baden-Powell went on to found the Scouting movement worldwide, and Seton became vital in the foundation of the (BSA) and was its first Chief Scout. His "Woodcraft Indians "(a youth organization), combined with the early attempts at Scouting from the and other organizations, and 's , to form the BSA. The work of Seton and Beard is in large part the basis of the movement. [cite web | last = | first = | year = | url =http://www.inquiry.net/traditional/index.htm | title =Traditional Scouting | format = | work = | publisher = American Traditional Scouting| accessdate =2007-07-18 ]

Seton was Chief Scout of the BSA from 1910-1915 and his work is in large part responsible for the American Indian influences within the BSA. However, he had significant personality and philosophical clashes with Beard and James E. West.

In addition to disputes about the content of and Seton's contributions to the Boy Scout Handbook, conflicts also arose about the suffrage activities of his wife, Grace, and his British citizenship. The citizenship issue arose partly because of his high position within BSA, and the federal charter West was attempting to obtain for the BSA required its board members to be US citizens. Seton drafted his written resignation on January 29, 1915 but did not send it to BSA until May.

Seton was an early pioneer of the modern school of animal fiction writing, his most popular work being "Wild Animals I Have Known" (1898), which contains the story of his killing of the wolf Lobo. This book is still in print.

In 1931 he became a . He died in in 1946, aged 86. Seton was cremated in Albuquerque. In 1960, in honor of his 100th birthday and the 350th anniversary of Santa Fe, his daughter Dee and his grandson Seton Cottier (son of Anya) scattered the ashes over Seton Village from a plane. [ Pamela Cottier Forcey, daughter of Anya. The Chief: Ernest Thompson Seton and the Changing West, H. Allen Anderson]

The houses the Seton Memorial Library and Museum. Seton Castle in Santa Fe, built by Seton and his last residence, housed many other items from him. During renovation work on Seton Castle in 2005, it caught fire and burned down. However, all the artwork, manuscripts, books, etc., had been removed to storage before the work. [cite web | last =Grimm | first = Julie Ann| year = 2005 | url =http://www.freenewmexican.com/news/35086.html | title =Seton Castle destroyed by fire | format = | work = | publisher = Santa Fe New Mexican.com| accessdate =2007-07-18 ]