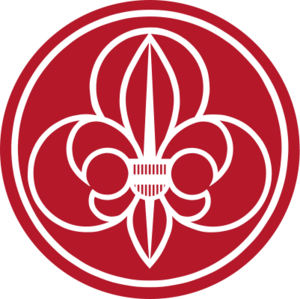 Pfadfinder und Pfadfinderinnen Österreichs (PPÖ; "Austrian Boy Scouts and Girl Guides") is the largest and Guiding organization in and the only one approved by (WAGGGS) and the (WOSM). The association claims more than 300 troops (local units) with more than 85,000 Scouts nationwide. WOSM and WAGGGS give quite smaller membership values for the PPÖ: 10,973 Scouts (as of 2008)

The badge of the PPÖ is dark red with a white combination of a and a , the symbols of WOSM and WAGGGS, respectively. In the center of the crest is a lighter red-and-white shield bearing the heraldic colors of Austria. The badges of both supranational organizations are also used.

The association is member of the Austrian National Youth Council.

As the movement spread, Girl Guides joined in 1913 and troops were founded all over the country. The national organization, the (ÖPB), was founded in April 1914. including the Girl Guide movement. This organization had strong ties to and , which was an independent Scout association in . After , Scouting developed separate organizations in and in other areas of the fractured .

The ÖPB's programs expanded, including Cub Scouts in 1920 and Rovers in 1921. Austria's movement also gained international recognition as a founder member of WOSM during an international conference in 1922; it hosted another international conference in 1931 (in ). The Girl Guides association grew more prominent with the foundation of the , which was part of the national organization and was led by ; this was followed by an independent girls association, formed in 1929, called . Austrian Scouts introduced the Mother's Day in Austria, first to honour the mother of the .

Beginning in 1934, there was a non-Scouting youth organization run by the state, which provided competition for Austrian Scouts. With the arrival of the Nazis and , however, Scouting in Austria was banned. In 1938, a number of Scout leaders were arrested and Scouting went underground, becoming associated with the for example.At the first celebration of the end of World War II, there were Scouts in uniform on the streets. More than 800 Scouts and Scoutleaders left Austria in 1938. "Austrian Scouts in Great Britain" was the Austrian organisation. Between 1939 and 1945 "Der neue Weg" was published as Austrian Scout magazine in Exile.

The Boy Scouts were readmitted to WOSM in 1946. Following the way, the national organizations combined to form the , which hosted the in in 1951 with 12,884 participants from 61 countries.In 1949 several Scoutleaders left the Pfadfinder Österreichs and founded the Österreichischer Pfadfinderbund again.In 1956 Austrian Scouts helped refugees after the .Austrian Scouts celebrated the 26th of October as "Day of the Austrian Flag" for long years.

The first national Austrian jamboree occurred in 1961, and continued every ten years.

There are nine geographical divisions of the PPÖ, one for each State of Austria. Every Scout wears the badge of his state on his uniform.

There are four age divisions of the PPÖ.

Some troops have introduced a "Biber" division for children younger than 7, but that age division is not approved by the PPÖ.