Main article: History of the Boy Scouts of America 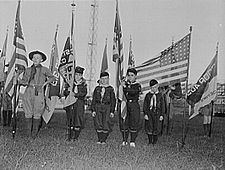 As early as 1911, Ernest Thompson Seton had developed a prototype program he named Cub Scouts of America that was never implemented. James E. West felt that having BSA divisions for younger boys (those under 12; the "younger boy problem") would draw away boys from the core program, which was Scout troops focused on the 12–17 year old age group; thus he opposed such a program for some time. In spite of this, unofficial programs for younger boys started around this time, under names such as Junior Troops or Cadet Corps. The BSA obtained the rights to Lord Baden-Powell's The Wolf Cub Handbook in 1916 and used it in unofficial Wolf Cub programs starting in 1918. This led to an issue with Daniel Carter Beard who felt that the use of the British book was nearly disloyal to the United States of America. West encouraged the formation of the Boy Rangers of America, a separate organization for boys eight through twelve based on an American Indian theme. The Boy Rangers used the Scout Law and their Chief Guide, Emerson Brooks, was a Boy Scout commissioner in Montclair, New Jersey. The BSA finally began some experimental Cub units in 1928 and in 1930 the BSA began registering the first Cub Scout packs, and the Boy Rangers were absorbed.[4] 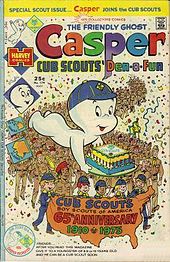 Casper the Friendly Ghost celebrates the 65th anniversary of the BSA

The British Cubbing program used elements of Rudyard Kipling's Jungle Book series, with the Cubmaster taking the role of Akela and the assistant Cubmaster the role of Baloo. The American program also syncretized American Indian elements, with all Cub Scouts belonging to the Webelos tribe, symbolized by the Arrow of Light and led by Akela. Webelos was also an acronym meaning Wolf, Bear, Lion, Scout. It has since come to mean "WE'll BE LOyal Scouts". The initial rank structure was Wolf, Bear and Lion, with ages of 9, 10 and 11. Dens of six to eight Cubs were entirely led by a Boy Scout holding the position of den chief.

The Aims of Cub Scouting are the same as the other divisions — build character, learn the responsibilities of citizenship, and develop personal fitness.

The Methods of Cub Scouting

The Purposes of Cub Scouting are

I promise to do my best
To do my duty to God and my country,
To help other people, and
To obey the Law of the Pack.

Law of the Pack

Cub Scout Promise
I promise to do my best
To do my duty to God and my country,
To help other people, and
To obey the Law of the Pack.

Cub Scout Motto
Do Your Best 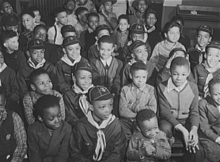 A meeting of the Cub Scouts at the Ida B. Wells Housing Project, Chicago

The pack meets once a month, providing a program for Cub Scouts, leaders, parents and other family members attending. The pack is led by a Cubmaster with one or more assistant Cubmasters. The pack committee is a group of adults, led by the pack committee chairman, who plan the pack program and activities and manage record keeping, finance, leadership recruitment and registration. The pack trainer is responsible for ensuring that all of the pack leaders are trained and for maintaining training records.

Cub Scouts who join a pack are assigned to dens with six to eight members, usually based on age: Tiger Cubs (first grade), Wolf Cub Scouts (second grade), Bear Cub Scouts (third grade) and Webelos Scouts (fourth and fifth grades). Dens meet weekly under the direction of the adult den leader. A Cub Scout is elected to the denner position to provide basic leadership to the den. A Boy Scout, Varsity Scout or Venturer holding the den chief position may assist the den leader in activities.[5] Den meetings are planned around a monthly theme and may include games, handicrafts, hikes and other outdoor fun while preparing for the next pack meeting.

Webelos is an acronym meaning "We'll Be Loyal Scouts". Packs with a large number of Webelos Scouts sometimes divide them into Webelos I and Webelos II dens, to keep their den from previous years intact. Webelos dens spend much of their time learning about Boy Scout customs, including the Scout Law and Oath. Many packs are formally associated a Boy Scout troop for mutual support— the troop provides assistance to the pack with activities such as campouts and ceremonies and in time, the Webelos Scouts cross over to the troop.

The Lone Cub Scout program serves boys who cannot take part in a nearby Cub Scout pack on a regular basis because of such factors as distance, weather, time, disability or similar issues.[6]

The uniform gives a Cub Scout visibility and creates a level of identity within both the unit and the community. The neckerchief, the neckerchief slide and the belt buckle uniforms are similar in basic design, they do vary in color and detail to identify the different divisions of Cub Scouts, Boy Scouts and Venturers. In all cases, shirts are tucked in. 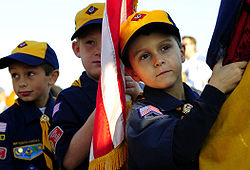 Adult leaders wear the basic Boy Scout field uniform. Female leaders have the option of the classic female Cub Scouter uniform. At the pack level, blue shoulder loops are worn on the epaulets. The cap, neckerchief, slide and belt of their group are worn.

The Scouter dress uniform is appropriate for professional Scouters and all Scouting leaders on formal occasions.

Advancement is one of the methods used to promote the aims of character development, citizenship training, and personal fitness. Everything a Cub Scout does in the advancement program is intended to achieve these aims and aid in personal growth. The program has two tiers of advancement: the classic rank system and the newer Academics and Sports Program.

First-year Cub Scouts (second grade) work toward the Wolf badge,[9] then toward Arrow Points.[10] Second year Cub Scouts (third grade) work toward the Bear badge[11] and then earn Arrow Points.[12] The Wolf badge has twelve requirements that empower basic life skills, whereas the Bear requires completing several requirements within the areas of "God", "Country", "Family" and "Self".

The Webelos Scout badge is usually earned by Webelos I dens. It requires Scouts to earn three activity badges (see below), demonstrate religiosity, and know the basics about Boy Scouts, such as the Outdoor Code.

The Cub Scouts Academics and Sports Program[16] is designed toward the third aim of Scouting: the development of physical, mental and emotional fitness. It is an optional program for all Cub Scouts and is designed to assist in learning or improving skills. Belt loops are awarded for completing standards in various academic and sport fields. Advanced skills are recognized by pins, displayed on the Cub Scout Academic and Sports letter. Some rank and activity badge requirements include earning belt loops.

Several religious emblems programs are administered by various religious institutions and recognized, but not sponsored, by the BSA. These are generally recognized by a medal and an embroidered square knot. A religious emblem of faith, or some other form of religiousity, is a requirement for the Bear and Webelos badges, and by extension the Arrow of Light.

Each pack has a number of annual events such as the pinewood derby, raingutter regatta, the space derby, gold rush, the blue and gold banquet and Scout Sunday or Scout Sabbath.

Several structured camping activities are available in the Cub Scout program. The pack overnighter is a pack-organized camping activity that provides Cub Scouts with positive outdoor experiences. Cub Scout day camp or twilight camp is an accredited, organized, one- to five-day program for Cub Scouts using trained leadership at an approved site, and is usually held during daylight or early evening hours, but not overnight. Cub Scout resident camp is an organized, accredited overnight camping program covering at least two nights and conducted under trained leadership in an established Scout camp operated by the council. The Webelos den overnight camp introduces the boy and his parent to the camping program, under the leadership of the Webelos den leader. Joint campouts with a local Boy Scout troop for second-year Webelos can help to strengthen ties between the pack and troop and facilitate the transition from Webelos to Boy Scouts.

The Soccer and Scouting[18] program is designed to involve Hispanic youth and families in the Cub scout program, instructing boys in both soccer and Cub Scout values.

Alcohol is strictly prohibited at all Cub Scout events.

New leaders are encouraged to attend training for their position, and is provided for all new den chiefs.

Fast Start Training is the introduction for adult leaders new to the Cub Scout program. Fast Start is self pace and provided as a video or online.[19] Youth Protection Training[19] is required for all adult leaders and must be recertified per local council policy. Basic Leader Training consists of the online This is Scouting course and Leader Specific Training. This is Scouting is a common core program for all adult leaders in the Cub Scouting, Boy Scouting, Varsity Scouting, and Venturing divisions. Leader Specific Training is provided for the Tiger Cub den leader, Cub Scout den leader, Webelos den leader, Cubmaster, pack committee chairman and assistants. Once Basic Leader Training is completed, the leader is awarded a Trained emblem for uniform wear.

At least one adult on a pack overnight campout must attend the Basic Adult Leader Outdoor Orientation (BALOO) in order to properly understand camping requirements.[20] Leaders for day camp and resident camp programs must be trained and certified by the National Camping School.

Supplemental training modules are designed to provide orientation beyond Basic Leader Training. These shorter training sessions are often provided at the Roundtable, a monthly meeting of leaders from the district, at a Pow-Wow or University of Scouting program offered by the local council and at National Cub Scouting Conferences held at the Philmont Scout Ranch and the Florida National High Adventure Sea Base.

Wood Badge is the advanced training program for leadership skills for all adults in all BSA programs. Wood Badge consists of six days of training (usually presented as two three-day weekends) and an application phase of several months. When training is complete, leaders are recognized with the Wood Badge beads, neckerchief and woggle.