Scouting in South Carolina has a long history, from the 1910s to the present day, serving thousands of youth in programs that suit the environment in which they live.

In 1914, the BSA gave local councils the power to ban African Americans from Scouting. Until 1974, some southern councils of the Boy Scouts of America were still racially segregated. The Old Hickory council did not integrate until 1974.

There are six Boy Scouts of America local councils in South Carolina. 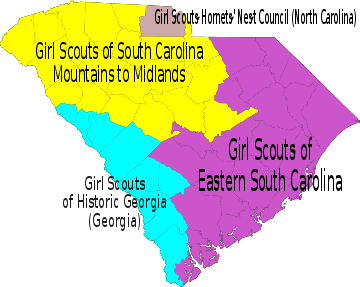 As of January 2007 there are five Girl Scout council offices in South Carolina; however, Girl Scouts is in the process of realigning councils mostly by merging old councils.

In addition two councils headquartered in other states serve girls in South Carolina.

Will cover Abbeville, Anderson, Cherokee, Chester, Fairfield, Greenville, Greenwood, Kershaw, Lancaster, Laurens, Lexington, Newberry, Oconee, Pickens, Richland, Saluda, Spartanburg, Sumter, and Union counties in the north-west of South Carolina. It should serve about 15,000 Girl Scouts. The merger should be effective on May 1, 2007.

It will be made up of the following current councils: