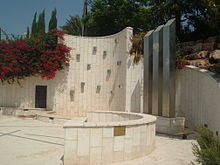 The October 2000 events were a series of protests in Arab villages in northern Israel in October 2000 that turned violent, escalating into clashes between Israeli Arabs and the Israel Police and ending in the deaths of demonstrators.[1]The Or Commission was established to investigate the police response to the rioting. Israeli media outlets refer to the episode as אירועי אוקטובר 2000 - the "October 2000 events"[2] while Arab community refers to it as (هبة أكتوبر) the "October ignition."

In September 2000, tensions between the police and Israel's Arab citizens rose. On September 12, Israel Police Northern District Commander Alik Ron requested an investigation of Hadash MK Mohammad Barakeh for inciting violence against police. At a meeting of the High Follow-up Committee for Arab citizens in Israel the next day in Kafar Manda, United Arab List's MK Abdulmalik Dehamshe declared: "We will beat or forcefully attack any policeman and we will break his hands if he comes to demolish an Arab house … we are on the verge of an Intifada among Israel’s Arabs following Alik Ron’s incitement."[3]

On September 14, Nazareth declared a general strike protesting "police incompetence in handling violence and crime" after the murder of a local resident, Nabieh Nussier, 52. [3] On September 30, the High Follow-up Committee called on the Arab community to mount a general strike to protest the killings of five Palestinians by Israeli security forces in the Jerusalem clashes of the previous day, which many consider the first day of the al-Aqsa Intifada.[4]

Demonstrations in Arab towns in northern Israel began to spread after repeated airings of news footage showing the alleged shooting death of 12 year-old Muhammad al-Durrah, who was said to have been caught in the crossfire between Israeli forces and Palestinian militia.[5][6][7]

Arab demonstrations and acts of civil-disobedience in solidarity with the Palestinians turned violent following the proclamation of a general strike by the Arab Higher Monitoring Committee to protest the deaths of Arab rioters in Jerusalem the previous day.[4] Arab rioting took place throughout northern Israel.[3]

In a number of areas police came under gunfire, and demonstrators threw Molotov cocktails. An Egged bus was torched at Umm al-Fahm.[3] During clashes in Umm al-Fahm, Muhammad Ahmad 'Eiq Al-Jabarin was fatally shot in the abdomen. Street battles subsequently broke out with police, during which 19-year old Ibrahim Sayyam Al-Jabarin was shot in the head and died in hospital the following day. Umm al-Fahm mayor Raed Salah was also wounded.[3][8]

In Baqa-Jatt, Rami Khatem Gharra was shot in the eye by Border Policeman Rashed Murshid, and later died of his injuries. Murshid was firing rubber bullets at 15 metres towards the upper body, in contravention to that weapon's non-lethal operation directive to be used at longer range towards the lower body. Many others were wounded.[9]

Asel Asleh, 17, was shot at close range by Israeli police with live ammunition in Arraba. His father said he was sitting under an olive tree watching the demonstrations when police chased, surrounded and shot him.[10] Alaa Nassar, 18, was also shot in the chest in Arraba, and died the same day.[3]

Misleh Hussein Abu Jarad from Deir al-Balah in the Gaza Strip was killed and seven others were injured in Umm al-Fahm when police snipers fired live ammunition at stone-throwers in contravention with Police procedure.[9]

Walid Abdul-Menem Abu Saleh, 21, and Emad Farraj Ghanaym, 25, were killed in an industrial area in the Sakhnin area/Misgav Regional Council when police fired live ammunition to disperse stone-throwers.[9] Walid was shot in the head and Emad in the heart.[1]

Demonstrators in Nazareth threw stones, burned tires, looted and burned shops.[3] Iyad Lawabni, 26, was shot in the heart [2] and died the same day after a confrontation there with police. Approximately 100 others were hurt, including one woman who was seriously injured. Dozens of residents of Mashhad approaching a Jewish neighbourhood of Upper Nazareth smashed house and car windows.

Traffic was blocked with burning tires on Route 65, a main artery connecting northern and central Israel. A Jewish man was attacked and pulled from his car by local youth, which they then torched. Three banks in Baqa al-Gharbiyye were set on fire.[3]

Ramez Bushnak, 24, from Kafar Manda, was shot in the head and died the same day during a confrontation with police, who explicitly denied claims that he was shot from close range. Dozens of residents clashed with police blocking the way to Jewish neighbourhoods in Misgav. Mohammed Khameisi, 19, from Kafar Kanna [3] was wounded in the leg and died the following day, though the nature and cause of his wound is debated.[citation needed] The funerals of those killed in previous days became focal points of renewed clashes.[3]

Extensive forest fires which Israel Police believed were the result of Arab arsonists caused the evacuations of some residents.[3]

Following the meeting between Barak and the Arab Higher Monitoring Committee, a general calm reigned with only minimal violence, including on 6 October, on which a "Palestinian day of rage" had been announced.[citation needed] On 5 October, hundreds of Arab residents of Jaffa burned tires, threw rocks, and beat some reporters.[3]

On 6 October mourners in Kafar Kanna at a funeral of one of those killed in clashes stoned and moderately injured a Jewish motorist from Tiberias. The next day, hundreds of Jewish youth in Tiberias burned tires, attacked a mosque, and attempted to assault Arabs.[3] Dozens of haredi youth stoned Arab traffic in Jerusalem and attacked Palestinian labourers, who were subsequently rescued by police.[3]

Jewish and Arab youth threw rocks at each other near a shopping mall on the border between Jewish and Arab neighbourhoods in Nazareth. Arab traffic in Upper Nazareth was stoned.[3]

A Jewish citizen, Bachor Jann, from Rishon LeZion, was killed after being hit by a stone thought to have been thrown by those taking part in the protests in Jisr az-Zarqa while driving on the Haifa-Tel Aviv freeway.[11] A scuffle at an Or Aqiva shopping mall between Jewish and Arab citizens resulted in an attack on the responding police and the throwing of a Molotov cocktail.[3]

Jewish civilians from Upper Nazareth attacked Arab civilians in Nazareth. Police dispersed the riots with tear gas and live ammunition.[3]Wissam Yazbak, 24, and Omar Mohammad Akkawi, 52, were killed, and at least five others were wounded, after Commander of the Valleys region, Moshe Waldman, ordered police to use live ammunition at the Canyon Junction between the Arab and Jewish neighbourhoods of Nazareth.[9] [10]Three Arab-owned apartments were torched in a neighbourhood of Tel-Aviv and hundreds clashed with police. Demonstrators chased two Arab employees out of a restaurant and set fire to it which damaged two Arab-owned cars parked in front.[3]

Hundreds of Jews broke windows in a Nazareth shopping mall and set fire to two cars. The mayor of Karmiel was attacked when he tried to calm Jewish citizens there. Arab property in Bat Yam and Petah Tikva was damaged.[3]A Muslim shrine in the old city of Acre was vandalized.[12]

The newspaper Al-Ittihad reported that four men stabbed an Arab worker on his way to work at a supermarket in Rosh HaAyin. Two Arabs were stabbed "in a fight with Jewish rioters in a Tel Aviv suburb."[12] In Jaffa, a mosque was torched and attempts were made to burn Jewish apartments and two synagogues. In Ramle, a synagogue was torched and traffic was stoned and firebombed. In Lod, a Jewish citizen was shot, a school was burned down, and attempts were made to torch a police station.[13]

In Nazareth, a crowd of mourners from Yazbak and Akkawi's funeral approached the police station and threw rocks and firebombs at it, despite the police's decision to keep all officers inside and out of sight until quiet set in. The police responded with tear-gas; when the stone-throwing continued, the assistant-mayor and two Arab Knesset members on the scene guaranteed a cessation in exchange for a police retreat, which they did. Arab youths also vandalised traffic signals at the Canyon Junction.[13]

Several hundred youth from Umm-al-Fahm stoned dozens of passing vehicles on Highway 65 and vandalised utility poles. The assistant mayor unsuccessfully attempted to stop the youths per agreements with police to avoid their involvement. The police still decided to keep distance, and the Umm-al-Fahm municipality finally cleared debris from the road allowing it to be reopened.[13]

The Arab media organization I'lam found that media coverage of the events of October 2000 created an atmosphere of war inside Israel, painting Arab citizens as violent rioters displaying their disloyalty to the State through riots; I'lam and other Arab organizations say that overall Arab citizens engaged in peaceful protest during October 2000, and that the entire population was treated in blanket fashion as a rioting 'fifth column.'[14]

The Arab Association for Human Rights, Adalah,[15] Mossawa,[16] I'lam, and other Arab NGOs in Israel cited “deep rooted frustration [of Arabs] at their own status as second class Israeli citizens,” as an underlying factor.[17] The Arab youth organization Baladna was formed partially in response to the events of October 2000.[18] According to Marwan Dwairy, the events of October 2000 are "an important landmark in the narrative of the Arab Palestinian citizens of Israel." [19]