The Coastal Road massacre of 1978 was an attack involving the hijacking of a bus on Israel's Coastal Highway in which 38 Israeli civilians, including 13 children, were killed, and 71 were wounded.[1][2] The attack was planned by Abu Jihad[3] and carried out by the PLO faction Fatah. The plan was to seize a luxury hotel in Tel Aviv and take tourists and foreign ambassadors hostage in order to exchange them for Palestinian prisoners held by Israel.[4] The timing was aimed at scuttling peace talks between Menachem Begin and Anwar Sadat.[5] However, due to a navigation error, the attackers ended up 40 miles (64 km) north of their target, and were forced to find alternative transportation to their destination.[6]

According to a Fatah commander who had helped to plan the attack, it was designed to derail the Israeli-Egyptian peace talks and to damage tourism in Israel.[6]

Time magazine characterized it as "the worst terrorist attack in Israel's history".[5] Fatah called the hijacking "Operation of the Martyr Kamal Adwan,"[7] after the PLO chief of operations killed in the Israeli commando raid on Beirut in April 1973.[8][9] In response, the Israeli military forces launched Operation Litani against PLO bases in Lebanon three days later.

On the morning of March 11, 1978, eleven Palestinian militants including Dalal Mughrabi[10] landed by Zodiac boats on a beach near Ma'agan Michael north of Tel Aviv, having departed from Lebanon with a stash of Kalashnikov rifles, rocket propelled grenades, light mortars and high explosives. They met American photographer Gail Rubin, who was taking nature photographs on the beach, and after she told them where they in fact were, they killed her.[6] They then walked less than a mile up to the four-lane highway, opened fire at passing cars and hijacked a white Mercedes taxi, killing its occupants.[5] Setting off down the highway toward Tel Aviv, they hijacked a bus carrying Egged bus drivers and their families on a day outing, along the Coastal Highway.

During the ride, the militants shot and threw grenades at passing cars, shot at the passengers and threw at least one body out of the bus.[5] At one point they commandeered another bus, and forced the passengers from the first bus to board the second one.[5]

The bus was finally stopped by a police roadblock near Herzliya, and a long shootout ensued.[5] Passengers who attempted to escape were shot by one of the terrorists.[5] Time Magazine speculated that more hostages may have been killed by the wild shooting of the "terrified" Israeli traffic policemen than by the militants, since there was not time enough for special Israeli antiterrorist squads to arrive on the scene. Furthermore it was speculated that the fire may have driven some of the terrorists to commit suicide, killing as many passengers as possible with them.[6] An explosion, caused either by an exploding fuel tank or a grenade, set the bus on fire.[11] 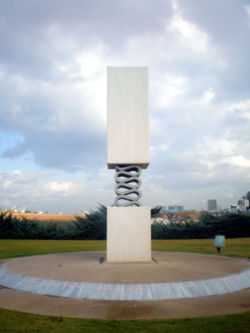 Memorial near Glilot Interchange on the coastal Highway

In a statement to the press delivered the following day, Israeli Prime Minister Menachem Begin stated, "They came here in order to kill the Jews. They intended to take hostages, and threatened, as the leaflet they left said, to kill all of them if we do not surrender to their demands... We shall not forget. And I can only call upon other nations not to forget that Nazi atrocity that was perpetrated upon our people yesterday."[50]

Speaking to the Knesset on March 13, Begin said, "Gone forever are the days when Jewish blood could be shed with impunity. Let it be known: The shedders of innocent blood shall not go unpunished. We shall defend our citizens, our women, our children. We shall sever the arm of iniquity."[51]

On March 15, three days after the massacre, Israel launched Operation Litani against PLO bases in southern Lebanon. The IDF spokesman stated, "The objective of the operation is not retaliation for the terrorists' crimes, for there can be no retaliation for the murder of innocent men, women and children - but to protect the state of Israel and its citizens from incursions of members of the Fatah and PLO, who use Lebanese territory in order to attack citizens of Israel."[52]

Palestinian Media Watch, an Israeli NGO that monitors antisemitism and support for terrorism in Palestinian society, has cited examples of Palestinian media that regard Dalal Mughrabi as a heroine and role model.[53] A Hebron girls' school was briefly named in honor of Mughrabi but the name was changed after it emerged that USAID was funding the school. Her name has also been given to summer camps and both police and military courses.[54] In February 2011 Palestinian Media Watch exposed a pan-Arab feminist media campaign promoting Mughrabi as a role model for women in the Arab world.[55]

During the 2008 Israel-Hezbollah prisoner swap, Israel intended to transfer her body to Hezbollah, however DNA testing showed that it was not among the exhumed corpses.[56]

Several locations under Palestinian Authority control have been named after Mughrabi.[57]

The Israeli security forces handling of the incident, including the final gun battle at the blockade where the bus was stopped,[5][6] led to widespread criticism in Israel. The security forces were also criticized for the fact that the militants were reportedly able to land undetected in broad daylight, and then move inland to ambush a taxi and then the two buses. There was also criticism that the security forces did not immediately block off the highway as soon as they were aware that a bus with hostages aboard had been hijacked.[58]

While there was not time enough to order up special Israeli antiterrorist squads before the confrontation, and the Israeli rescue attempt was reportedly led by some 30 "terrified traffic cops", armed only with .38 revolvers and UZI submachine guns,[6][5] other reports say that Ehud Barak, then an officer in the Sayeret Matkal anti-terrorism unit, led the rescue operation. According to Hugh Macleod, a British journalist, there are reports of images of him firing shots into her dead body as it lay on the road.[59][60][61] A different version of the story was published by Al-Hayat Al-Jadida , the official daily newspaper of the Palestinian National Authority, on March 11, 2002, in which "Ehud Barak, ... stuck the bayonet of his rifle into the Martyr El Mughrabi’s body, as well as performing other atrocities on intimate parts of her body". Itamar Marcus of the Israeli media monitoring group Palestinian Media Watch called the allegations against Barak "revolting libel".[62]