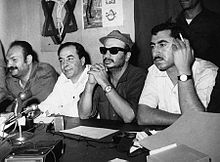 Hawatmeh with Yasser Arafat and Kamal Nasser at press conference in Amman prior to Black September.

Nayef Hawatmeh (kunya Abu an-Nuf, b. 1935/37 in Salt, Jordan), Jordanian-Palestinian Christian politician. His name can be transliterated from the Arabic in many ways; variants include Naif Hawatma, Niaf Hawathme, etc.

Hawatmeh hails from a Jordanian tribe of Catholic Christians. He is the General Secretary of the Marxist Democratic Front for the Liberation of Palestine (DFLP) since its formation in a 1969 split from the Popular Front for the Liberation of Palestine (PFLP), of which he was also a founder. He was active as a left-wing leader in the Arab Nationalist Movement (ANM), which preceded the PFLP.

He presently resides in exile in Syria, from which the DFLP receives some support; Israel blames the DFLP for the 1974 Ma'alot massacre, and so will not permit him to enter the Palestinian territories.

Hawatmeh opposed the 1993 Oslo Accords, calling them a "sell-out", but became more conciliatory in the late 1990s. In 1999 he agreed to meet with Yassir Arafat (who had signed the accords) and even shook hands with the Israeli President, Ezer Weizmann, at the funeral of King Hussein of Jordan, drawing strong criticism from his Palestinian and Arab peers.

In 2004 he was briefly active in a joint Palestinian-Israeli non-governmental attempt to start a coalition of Palestinian groups supporting a two-state solution, and called for a cessation of hostilities in the al-Aqsa Intifada.

In 2007 Israel indicated it would allow him to travel to the West Bank for the first time since 1967, in order to participate in a meeting of the Palestine Liberation Organization (PLO).