Beginning with the reconquest of his family's ancestral home city of Riyadh in 1902, he consolidated his control over the Najd in 1922, then conquered the Hijaz in 1925. The nation was founded and unified as Saudi Arabia in 1932. As King, he presided over the discovery of petroleum in Saudi Arabia in 1938 and the beginning of large-scale oil exploitation after World War II. He was the father of many children, including all of the subsequent kings of Saudi Arabia.

Abdul-Aziz was born in 1876 in Riyadh, in the region of Najd in central Arabia.

In 1890, the Al Rashid conquered Riyadh. Abdul-Aziz was 14 at the time. He and his family initially took refuge with the Al-Murrah, a Bedouin tribe in the southern desert of Saudi Arabia. Later, the Al Sauds moved to Kuwait.

Abdul-Aziz lived with his family in a simple dwelling. His primary occupation, and the family's sole source of income, was undertaking raids in the Najd. He also attended the daily majlis of the emir of Kuwait, Mubarak Al-Sabah, from whom he learned the art of statecraft.[citation needed]

In the spring of 1901, he and some relatives – including a half-brother, Mohammed, and several cousins – set out on a raiding expedition into the Najd, targeting for the most part tribes associated with the Rashidis. As the raid proved profitable, it attracted more participants. The raiders' numbers peaked at over 200, though these numbers dwindled over the ensuing months.[citation needed]

In the fall, the group made camp in the Yabrin oasis. While observing Ramadan, he decided to attack Riyadh and retake it from the Al Rashidi. On the night of 15 January 1902, he set out with a raiding party of some twenty men (forty or more, mostly slaves, had remained at the oasis to guard the camels and baggage).[citation needed] Their raid was successful. The Rashidi governor of the city, Ajlan, was killed in front of the gate to his own fortress.

Following the capture of Riyadh, many former supporters of the House of Saud rallied to Ibn Saud's call to arms. He was a charismatic leader and kept his men supplied with arms. Over the next two years, he and his forces recaptured almost half of the Najd from the Rashidis.

In 1904, Ibn Rashid appealed to the Ottoman Empire for military protection and assistance. The Ottomans responded by sending troops into Arabia. On 15 June 1904, Ibn Saud's forces suffered a major defeat at the hands of the combined Ottoman and Rashidi forces.[citation needed] His forces regrouped and began to wage guerrilla warfare against the Ottomans. Over the next two years he was able to disrupt their supply routes, forcing them to retreat.

He completed his conquest of the Najd and the eastern coast of Arabia in 1912. He then founded the Ikhwan, a military-religious brotherhood which was to assist in his later conquests, with the approval of local Salafi ulema. In the same year, he instituted an agrarian policy to settle the nomadic pastoralist bedouins into colonies, and to dismantle their tribal organizations in favor of allegiance to the Ikhwan.[citation needed]

During World War I the British government established diplomatic relations with Ibn Saud. The British agent, Captain William Shakespear, was well received by the Bedouin.[4] Similar diplomatic missions were established with any Arabian power who might have been able to unify and stabilize the region. The British entered into a treaty in December 1915 (the "Treaty of Darin") which made the lands of the House of Saud a British protectorate and attempted to define the boundaries of the developing Saudi state.[5] In exchange, Ibn Saud pledged to again make war against Ibn Rashid, who was an ally of the Ottomans.

Shakespear died at the Battle of Jarrab. He was followed by St John Philby in 1917 seconded by the British India Office. The British Foreign Office had previously begun to support Sharif Hussein bin Ali, Emir of the Hejaz by seconding Lawrence of Arabia in 1915. The Saudi Ikhwan began conflict with Emir Feisal also in 1917 just as his sons Abdullah and Feisal entered Damascus. The Treaty of Darin remained in effect until superseded by the Jeddah conference of 1927 and the Dammam conference of 194 during both of which Abdul Aziz Ibn Saud extended his boundaries past the Anglo-Ottoman Blue Line. After Darin, he stockpiled the weapons and supplies with which the British provided him,[citation needed] including a 'tribute' of (£5,000 Sterling per month). After World War One he received further support from the British, including a glut of surplus munitions. He launched his campaign against the Al Rashidi in 1920; by 1922 they had been all but destroyed.

The defeat of the Al Rashidi increased the size of Saudi territory twofold. This allowed Ibn Saud the leverage to negotiate a new and more favorable treaty with the British. Their treaty, signed at Uqair in 1922, saw Britain recognize many of his territorial gains.[citation needed] In exchange, Ibn Saud agreed to recognize British territories in the area, particularly along the Persian Gulf coast and in Iraq. The former of these were vital to the British, as merchant traffic between British India and England depended upon coaling stations on the approach to the Suez Canal.

In 1925 the forces of Ibn Saud captured the holy city of Mecca from Sharif Hussein bin Ali, ending 700 years of Hashemite rule. On 10 January 1926, Ibn Saud proclaimed himself King of the Hejaz in the Great Mosque at Mecca. On 20 May 1927, the British government signed the Treaty of Jeddah, which abolished the Darin protection agreement and recognized the independence of the Hejaz and Najd with Ibn Saud as its ruler.

With international recognition and support, Ibn Saud continued to consolidate power throughout the Arabian Peninsula. After the alliance between the Ikhwan and the Al Saud collapsed, he suppressed the Ikhwan Revolt in the Battle of Sabilla in March 1929. In 1932, after conquering most of the Peninsula, he renamed his dominions "Saudi Arabia" and proclaimed himself "King of Saudi Arabia".

Oil and the rule of Ibn Saud

Oil was discovered in Saudi Arabia in 1938 by American geologists working for Standard Oil of California in partnership with Saudi officials. Through his advisers St. John Philby and Ameen Rihani, he granted substantial authority over Saudi oil fields to American oil companies in 1944, much to the dismay of the British who had invested heavily in the House of Saud's rise to power in hopes of open access to any oil reserves that were to be surveyed. Beginning in 1915, Ibn Saud signed the "friendship and cooperation" pact with Britain to keep his militia in line and cease any further attacks against thier protectorates for whom they were responsible. Not only did the British pay a generous monthly allowance for his cooperation, in 1935 he was knighted into the Order of the Bath.

His new found oil wealth brought with it a great deal of power and influence that, naturally, Ibn Saud would use to advantage in the Hijaz. He forced many nomadic tribes to settle down and abandon "petty wars" and vendettas. He also began widespread enforcement of new kingdom's ideology, based on the teachings of Muhammad Ibn Abd al-Wahhab. This included an end to traditionally sanctioned rites of pilgrimage, recognized by the orthodox schools of jurisprudence, but odds with those sanctioned by Abd al Wahhab. In 1926, after a caravan of Egyptians on the way to Mecca were beaten for playing bugles by his forces after which he was impelled to issue conciliatory statement to the Egyptian government. In fact, several such statements would have to be issued to Muslim government around the world as a result of beating suffered by the pilgrims visiting the holy cities of Mecca and Medina. With the uprising of and subsequent decimation thereafter of the Ikhwan in 1929, via British air power, however, the 1930s onward marked a turning point. With his rivals eliminated, Ibn Saud's ideology was in full force, ending nearly 1400 years of accepted religious practices surrounding the Hajj, the majority of which were sanctioned by a millennia of scholarship.

He was able to gain loyalty from tribes even nearby Saudi Arabia, tribes such as those in Jordan. For example, he built very strong ties with Prince Sheikh Rashed Al- Khuzai from Al Fraihat tribe, one of the most influential and royal roots family during the Ottomans Empire. Prince Rashed Al-Khuzai and his tribe had dominated eastern Jordan before the arrival of Sharif Hussein.[6] Ibn Saud supported Prince Rashed Al-Khuzai and his followers in rebellion against the Hussein.[7][8]

Prince Rashed supported Izz ad-Din al-Qassam's Palestinian revolution in 1935 which led him and his followers in rebellion against King Abdullah of Jordan. And later at 1937, when they were forced to leave Jordan, Prince Rashed Al Khuzai, his family, and a group of his followers chose to move to Saudi Arabia, where Prince Al Khuzai was living for several years in the hospitality of King Abdul-Aziz Al Saud.[7][8][9][10][11][12][13]

He positioned Saudi Arabia as neutral in World War II, but was generally considered to favor the Allies.[14] However, in 1938, when an attack on a main British pipeline in the Kingdom of Iraq was found to be connected to the German Ambassador, Dr. Fritz Grobba, Ibn Saud provided Grobba with refuge.[15] It was reported that he had been "on the outs" with the British since 1937.[16]

In 1948, he participated in the Arab-Israeli War. Saudi Arabia's contribution was generally considered token.[14] 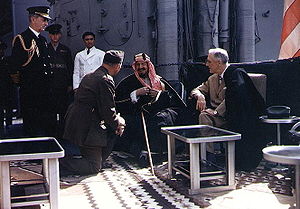 The number of children that Ibn Saud fathered is unknown. One source indicates that he had 37 sons. His number of wives is put at 22.[17]