The Royal Saudi Navy is the Naval force of the Kingdom of Saudi Arabia. The Royal Saudi Navy is sometimes referred to as the RSNF (Royal Saudi Naval Forces). The Navy has about 15,000 officers and men, including 3,000 Marines. The Naval headquarters is in Riyadh. The Western Fleet is based in the Red Sea with the main base at Jeddah. The Eastern Fleet is based in the Persian Gulf with the headquarters at Jubail. Other naval facilities were located at Yanbu, Dammam, and Ras al Mishab.

The Navy was founded in 1960 and began a significant expansion with US assistance in 1972 aiming to match the Imperial Iranian Navy. Following the Iranian Revolution a further expansion programme was initiated with French assistance, this was the Sawari programme. Further vessels were purchased from Britain and France in the 1980s and 1990s. In 1980, U.S. defense contractor Science Applications International Corporation began work with the Royal Saudi Navy to design and integrate the country's own command, control, and communications (C3) centers.[9]

The navy is a modern force with foreign built ships: 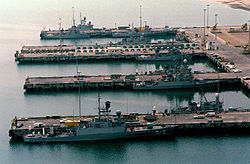 King Abdul-Aziz Naval Base in Jubail , home to the eastern fleet of the Royal Saudi Navy

The helicopter deck at the stern has a single landing spot for a medium size helicopter, such as the Eurocopter AS 365 Dauphin or the larger AS 532 Cougar or NH90 helicopters.

It was believed the Saudis intended to order two new British-built Type 45 Destroyers,[10] however production of the destroyers is now coming to an end and no order has been made. Another Destroyer that the Saudis are considering is the American built Arleigh Burke class destroyer, having been briefed by the US Navy in May, 2011 on the acquisition of 2 Destroyer in a package that includes an unknown number of Littoral Combat Ships. [11]

These replaced 4 Addiriyah (MSC322 or US Bluebird by Petersen Builders) class patrol minesweepers purchased in the late 1970s: