The Phalanx CIWS is an anti-ship missile defense system. It is a close-in weapon system (CIWS) and was designed and manufactured by the General Dynamics Corporation, Pomona Division[4] (now a part of Raytheon). Consisting of a radar-guided 20mm Gatling gun mounted on a swivelling base, the Phalanx is used by the United States Navy on every class of surface combat ship, by the United States Coast Guard aboard its Hamilton-class and Legend class cutters and the navies of 23 allied nations.[citation needed]

A land based variant known as C-RAM has recently been deployed in a short range missile defense role, to counter incoming rockets and artillery fire.[6]

Because of their distinctive barrel-shaped radome and their automated nature of operation, Phalanx CIWS units are sometimes nicknamed "R2-D2" after the famous droid from Star Wars,[7][8] and in the Royal Navy as Daleks, after the aliens from Doctor Who.[citation needed]

The Phalanx Close-In Weapons System (CIWS) was developed as the last line of automated weapons defense (terminal defense or point defense) against anti-ship missiles (AShMs), including high-g and maneuvering sea-skimmers. The first prototype system was offered to the U.S. Navy for evaluation on USS King DLG-10 in 1973 and it was determined that additional improvements were required to improve performance and reliability. Subsequently, the Phalanx Operational Suitability Model (OSM ) successfully completed Operational Test and Evaluation (OPEVAL) onboard USS Bigelow DD-942 in 1977. OSM exceeded operational maintenance, reliability, and availability specifications. DSARC-III followed OPEVAL which was followed by approval for production in 1978. Phalanx production started with orders for 23 USN and 14 Foreign Military Sales (FMS) systems. The first ship fully fitted out was the USS America CV-66 in 1980. The Navy began placing CIWS systems on non-combatant vessels in 1984.

The basis of the system is the 20 mm M61 Vulcan Gatling gun autocannon, used since the 1960s by the United States military in nearly all fighter aircraft (and one land mounting, the M163 VADS), linked to a Ku-band radar system for acquiring and tracking targets. This proven system was combined with a purpose-made mounting, capable of fast elevation and traverse speeds, to track incoming targets. An entirely self-contained unit, the mounting houses the gun, an automated fire control system and all other major components, enabling it to automatically search for, detect, track, engage and confirm kills using its computer-controlled radar system. Due to this self-contained nature, Phalanx is ideal for support ships which lack integrated targeting systems and generally have limited sensors. The entire unit has a mass between 5,500 and 6,100 kg (12,400 to 13,500 lb).

Due to the continuing evolution of both threats and computer technology, the Phalanx system has, like most military systems, been developed through a number of different configurations. The basic (original) style is the Block 0, equipped with first generation solid state electronics and with marginal capability against surface targets. The Block 1 (1988) upgrade offered various improvements in radar, ammunition, rate of fire, increasing engagement elevation to +70 degrees, and computing. These improvements were intended to increase the system's capability against emerging Russian supersonic anti-ship missiles. Block 1A introduced a new computer system to counter more maneuverable targets. The Block 1B PSuM (Phalanx Surface Mode, 1999) adds a forward looking infrared (FLIR) sensor to allow the weapon to be used against surface targets.[11] This addition was developed to provide ship defense against small vessel threats and other "floaters" in littoral waters and to improve the weapon's performance against slower low-flying aircraft. The FLIR's capability is also of use against low-observability missiles and can be linked with the RIM-116 Rolling Airframe Missile (RAM) system to increase RAM engagement range and accuracy. The Block 1B also allows for an operator to visually identify and target threats.[11]

The U.S. is in the process of upgrading all their Phalanx systems to the Block 1B configuration. The Block 1B is also used by other navies such as Canada, Portugal, Japan, Egypt, Bahrain and the UK.[12]

In May 2009 the US Navy awarded a $260 million contract to Raytheon Missile Systems to perform upgrades and other work on the Phalanx. The work is to be completed by September 2012.[13]

The CIWS is designed to be the last line of defense against anti-ship missiles. Due to its design criteria its effective range is very short relative to the range of modern ASMs, from 1 to 5 nautical miles (9 km). The gun mount moves at a very high speed and with great precision. The system takes minimal inputs from the ship, making it capable of functioning despite potential damage to the ship. The only inputs required for operation are 440 V AC at 60 Hz and water for electronics cooling. For full operation including some non-essential functions, it also has inputs for true compass ship's heading and 115 V AC for the PASS and tape drive subsystems.

A technician checks the RADAR transmitter and microwave assemblies of a Phalanx CIWS, most likely a Block 0. The search radar can be seen at the top with the vertical, orange-peel shaped, tracking radar below it.

The CIWS has two antennas that work together to engage targets. The first antenna, for searching, is located inside the radome on the weapon control group (top of the white-painted portion). The search subsystem provides bearing, range, velocity, heading, and altitude information of potential targets to the CIWS computer. This information is analyzed to determine whether the detected object should be engaged by the CIWS system. Once the computer identifies a valid target (see details below), the mount moves to face the target and then hands the target over to the track antenna. The track antenna is extremely precise, but views a much smaller area. The tracking subsystem observes the target until the computer determines that the probability of a successful hit is maximized and then, depending on the operator conditions, the system will either fire automatically or will recommend fire to the operator. While firing, the system tracks outgoing rounds and 'walks' them onto the target.

The Block 0 CIWS mounts (hydraulic driven) fired at a rate of 3,000 rounds per minute and they could only hold 989 rounds in the magazine drum.[4] The Block 1 CIWS mounts (hydraulic) also fired at 3,000 rounds per minute with an extended magazine drum holding 1,550 rounds. The Block 1A and newer (pneumatic driven) CIWS mounts fire at a rate of 4,500 rounds per minute and also had the larger 1,550 round magazine. The velocity of the rounds once fired is approximately 3,600 feet per second (1,100 m/s). The rounds are armor-piercing tungsten penetrator rounds or depleted uranium with discarding sabots. The kinetic projectiles are designed to pierce and explode an incoming missile's warhead. The ammunition handling system has two conveyor belt systems. The first takes the rounds out of the magazine drum and to the gun; the second takes either the empty shells or non-fired rounds and routes them back to the opposite end of the drum.

The CIWS does not recognize identification friend or foe, also known as IFF. The CIWS has only the data it collects in real time from the radars to decide if the target is a threat and to engage it. A contact has to meet multiple criteria for it to be considered a target. Some of the criteria are listed below.

A sailor sits at a CIWS Local Control Panel (LCP) during a general quarters drill.

There are many other subsystems which together ensure proper operation, such as environmental control, transmitter, mount movement control, power control and distribution and so on. It takes 6 to 8 months to train a technician to maintain, operate, and repair the CIWS.

On February 10, 1983, USS Antrim (FFG-20) was conducting a live fire exercise off the east coast of the United States using the Phalanx against a target drone. Although the drone was successfully engaged at close range, the target debris bounced off the sea surface and struck the ship, causing significant damage and fire from the drone's residual fuel which killed a civilian instructor.[14][15]

On February 25, 1991, during the first Gulf War, the Phalanx-equipped USS Jarrett (FFG-33) was a few miles from the USS Missouri (BB-63) and the destroyer HMS Gloucester (D96). The ships were attacked by an Iraqi Silkworm missile (often referred to as the Seersucker), at which time the Missouri fired its SRBOC chaff. The Phalanx system on Jarrett, operating in the automatic target-acquisition mode, fixed upon 'Missouri's chaff, releasing a burst of rounds. From this burst, four rounds hit Missouri which was two to three miles (about 5 km) from Jarrett at the time. There were no injuries.[16] A Sea Dart missile was then launched from HMS Gloucester in a 'tail end' engagement; destroying the Iraqi missile as it passed between Gloucester and the USS Missouri (BB-63), achieving the first successful engagement of a missile by a missile during combat at sea.

Accidental downing of US aircraft

On June 4, 1996, a Japanese Phalanx accidentally shot down a US A-6 Intruder that was towing a radar target during gunnery exercises. A Phalanx aboard the Asagiri class destroyer Yūgiri locked onto the Intruder instead of the target. Both pilots ejected safely.[17] A post-accident investigation concluded that the Yūgiri's gunnery officer gave the order to fire before the A-6 was out of the CIWS engagement envelope.[18][19] 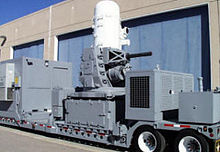 Seeking a solution to constant rocket and mortar attacks on bases in Iraq, the United States Army requested a quick-to-field anti-projectile system in May 2004, as part of its Counter-Rocket, Artillery, Mortar initiative.[20] The end result of this program was 'Centurion'. For all intents and purposes a terrestrial version of the Navy's CIWS, the Centurion was rapidly developed,[21] with a proof of concept test in November that same year. It began deployment to Iraq in 2005,[20][22] where it was set up to protect forward operating bases and other high-value sites in and around the capital, Baghdad.[23] Israel has purchased a single system for testing purposes, and is reported[24] to be considering buying the system to counter rocket attacks and defend point military installations. Investments made in their own indigenous air defence system, Iron Dome, has provided competition to Centurion.[24][25]

Each system uses consisted of a modified Phalanx 1B CIWS, powered by an attached generator and mounted on a trailer for mobility. Armed with a 20 mm M61A1 Gatling gun the unit is capable of firing 1,500 or 2,000 M246 or M940 rounds per minute.[6][26] In 2008 there were more than twenty CIWS systems protecting bases in the U.S. Central Command area of operations. A Raytheon spokesman told Navy Times that 105 attacks were defeated by the systems, most of those involved mortars. Based on the success of Centurion, 23 additional systems were ordered in September 2008.[27]

Like the naval (1B) version, Centurion uses Ku-band radar and FLIR[28] to detect and track incoming projectiles, and is also capable of engaging surface targets, with the system able to reach a -25 degree elevation.[28] The Centurion is reportedly capable of defending a 1.2 km square area.[29] One major difference between the land and sea based variants is the choice of ammunition. Whereas naval Phalanx systems fire tungsten armor-piercing rounds, the C-RAM uses the M246 or M940 HEIT-SD (High-Explosive Incendiary Tracer, Self-Destruct) ammunition, originally developed for the M163 Vulcan Air Defense System.[21][30] These rounds explode on impact with the target, or upon tracer burnout, thereby greatly reducing the risk of collateral damage, should any rounds fail to hit their target.[21][30] 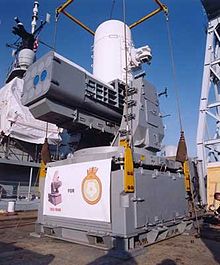 Utilising the armament of the RIM-116 Rolling Airframe Missile, and based on the mounting and targeting systems of the Phalanx, SeaRAM was developed in response to concerns about the performance of gun-based systems against modern, super-sonic sea-skimming anti-ship missiles. Designed as a companion self-defense system to Phalanx,[31] the SeaRAM is equipped with an 11 cell RAM launcher, and provides defense at a longer range. Due to the common mounting, SeaRAM inherits the relatively easy installation characteristics of its gun-based sibling, with Raytheon stating that "[SeaRAM] fits the exact shipboard installation footprint of the Phalanx, uses the same power and requires minimal shipboard modification".[31] Currently in the trial stages, SeaRAM is fitted to the Independence Class Littoral Combat Ship.[31] 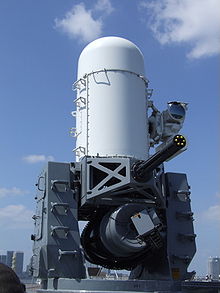 Block 1B Phalanx, with the improved barrel and FLIR.