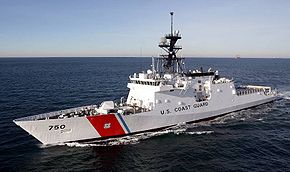 The Legend Class Cutters are the second largest of all Coast Guard Cutters behind the Healy class and is replacing the Hamilton Class Cutters.[4] These cutters are envisioned by the Coast Guard as being able to undertake the entire range of the High Endurance Cutter's role with additional upgrades to make it more of an asset to the Department of Defense during declared national emergency contingencies.[5] These vessels can be used for intercepting suspect vessels, or for rescuing swimmers, fishery protection, maritime homeland security missions, counter terrorism, coastal patrol missions. To facilitate intercept missions, the Legend Class Cutter is able to launch and retrieve both the Short Range Prosecutor and the larger Long Range Interceptor. Both RIBs are propelled by pump-jets.

The first NSC, Bertholf entered sea trials in February 2008.[6] It has been in service since August 2008, and is homeported at Coast Guard Island, Alameda, California. A second NSC, Waesche, is also homeported in Alameda in 2010.[7] Construction of the Stratton - which now carries a crew of 123 - began in 2008 at Northrop Grumman's Ingalls Shipyard in Pascagoula, Miss. The vessel was christened by first lady Michelle Obama on July 23, 2010, and released to the custody of the Coast Guard on Sept 2, 2011.[8] Five more units are projected.[9]

On 7 July 2009, the Government Accountability Office reported that delays in the NSC program are likely to result in "the loss of thousands of cutter operational days for conducting missions through 2017."[10] The GAO also that month reported that problems in the NSC program have delayed the OPC program by five years.[11] The program was also plagued by structural issues, the Coast Guard historically uses its cutters extensively, typically 230 days at sea a year, furthering the problem this will often be in North Pacific and North Atlantic waters that are some of the roughest seas in the Northern Hemisphere. As such, the stresses on the Cutters are expected to be very severe. Structural Analysis showed that some parts of the cutter could be expected to survive only 3 years. This has been addressed in cutter 752 on, with the first 2 cutters receiving reinforcements later.[12]

Northrop Grumman has offered its National Security Cutter design as a new frigate for the United States Navy at a cost of less than $400 million as a complement to the Littoral combat ship (LCS), with the possibility of later adding in the LCS weapons and mission module capabilities. The design would have a lower top speed than the LCS but much longer endurance.[13] However the NSC is not built to the same level of survivability as Navy ships and so would face higher risks if pressed into combat duties.[14] They are also offering a Patrol Frigate for international sales with Aegis and harpoons.[15]

The Legend Class Cutters have increased data link bandwidth. The EADS TRS-3D radar system provides three dimensional air and surface search functions and is used in the LCS program as well as the German Corvette K130 program.[16] The cutters are also equipped with the AN/SLQ-32 Electronic Warfare (EW) system used in the DDG-51.[17] The Legend Class are equipped with the same Bofors 57 mm gun with a 220 rpm ability used by the LCS program.[18] The Missile Defense duties are handled by the MK 36 SRBOC decoy systems also used on the FFG-7 and CG-47 programs and the CIWS.[19] The sonar is reported as having mine and underwater swimmer location ability.[20]