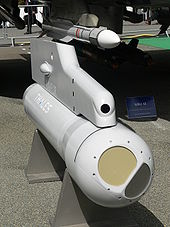 The sensors installed in FLIR cameras, as well as those of other thermal imaging cameras, use detection of infrared radiation, typically emitted from a heat source, to create the "picture" assembled for the video output, they can be used to help pilots and drivers steer their vehicles at night, and in fog, or detect warm objects against a cooler background. The wavelength of infrared that thermal imaging cameras detect differs significantly from that of night vision, which operates in the visible light and near infrared ranges (0.4 to 1.0 μm).

There are two basic ranges of infrared; long-wave infrared and medium-wave infrared. The long-wave infrared (LWIR) cameras, sometimes called "far infrared", operate at 8 to 12 μm and can see heat sources, such as hot engine parts or human body heat, a few miles away, but longer-distance viewing is made more difficult because the infrared light is absorbed, scattered, and refracted by the air and water vapor. Some long-wave cameras require their detector to be cryogenically cooled, typically for several minutes before use, although moderately sensitive infrared cameras are produced that do not require cryogenic cooling. Many thermal imagers including some forward looking infrared cameras are uncooled such as some LWIR Enhanced Vision Systems (EVS).

Cameras which operate in the 3 to 5 μm range are called medium-wave infrared (MWIR) and can see almost as well, as those frequencies suffer less from water-vapor absorption, but generally require a more expensive sensor array and cryogenic cooling.

Many camera systems use digital image processing to improve the image quality. infrared imaging sensor arrays often have wildly inconsistent sensitivities from pixel to pixel, due to limitations in the manufacturing process. To remedy this, the response of each pixel is measured at the factory, and a transform, most often linear, maps the measured input signal to an output level.

Thermal imaging cameras, such as the AN/AAQ-26, are often used in a variety of applications, including naval vessels, fixed-wing aircraft, helicopters, and armored fighting vehicles. In warfare, they have three large advantages. First, the imager itself is nearly impossible for the enemy to detect, as it detects energy that's already there and doesn't have to send out any energy of its own. Second, it sees heat, which is hard to camouflage. Third, these camera systems can see through smoke, fog, haze, and other atmospheric obscurants better than a visible light camera can.

The term "forward looking" is used to distinguish fixed forward looking thermal imaging systems from sideways tracking infrared systems, also known as "push broom" imagers, and other thermal imaging systems such as gimbal-mounted imaging systems, handheld imaging systems and the like. Pushbroom systems typically have been used on aircraft and satellites. They normally involve a one-dimensional (1D) array of pixels which uses the motion of the aircraft or satellite to move the view of the 1D array across the ground to build up a 2D image over time. Such systems cannot be used for real time imaging, and must look perpendicular to the direction of travel.

In 1956 Texas Instruments began research on infrared technology that led to several line scanner contracts and with the addition of a second scan mirror the invention of the first forward looking infrared camera in 1963 with production beginning in 1966. In 1972 TI invented the Common Module concept, greatly reducing cost and allowing reuse of common components.

The cost of thermal imaging equipment in general has fallen dramatically. Older camera designs used rotating mirrors to scan the image to a small sensor. More modern cameras no longer use this method; the simplification helps reduce cost. Uncooled technology available in many EVS products have reduced the costs of older cooled technology to fractions of the price with similar performance measures. EVS is rapidly becoming mainstream on many fixed wing and rotary wing operators from Cirrus and Cessna aircraft to large business jets.

In R v. Tessling Canada's Supreme court determined that the use of thermal imagers in surveillance by police was permitted without requiring a search warrant. The Court determined that the general nature of the data gathered by thermal imagers did not reveal personal information of the occupants and therefore was not in violation of Tessling's Section 8 rights afforded under the Charter of Rights and Freedoms (1982).