The armed forces currently operate under the jurisdiction of the Ministry of National Defence. Under the constitution the RCAF is in charged of protecting the sovereignty and territorial integrity of the Kingdom of Cambodia from external threats.

The RCAF was created in 1993 by the merger of the Cambodian People's Armed Forces and the two non communist resistance armies. At the time, there were also resistance forces opposing the Government comprising the Khmer Rouge and a separate royalist resistance movement (also known as the National United Army or NUA).

The military police have posts in every province and municipality across the country. The Royal Cambodian Air Force is the smallest of the three forces and has around 1,000 employees. The air force operates in every province with an airport.[2]

The RCAF command is divided geographically into five military regions and one special region. Each region includes several sub regions that correlate to civilian municipal and provincial boundaries[2]: 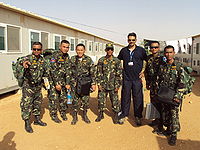 Cambodian Marines aboard the USS Tortuga during military training.

In 2002, Prince Sisowath Sirirath, then Co-Minister of Defense, stated that the total Cambodian military strength stood around 112,000 persons.[3] With the end of fighting and the surrender of the last of the Khmer Rouge, the Cambodian military has been undergoing substantial changes as it shifts to become a peacetime force.

Since 1999, the government has been working to demobilize large numbers of servicemen with support from the World Bank. Demobilization efforts began in February 2000 and the first 1,500 soldiers were demobilized in a pilot project later that year. In 2001, the first phase of demobilization got under way and 15,000 soldiers returned to civilian life in large ceremonies around the country. A second phase of demobilization was planned for 2003 where an additional 30,000 servicemen would leave the armed forces. However, the process has been stalled by allegations of corruption and procurement irregularities.[2]

The Royal Khmer Armed Forces "Forces Armées Royales Khmeres" (FARK), was established on 9 November 1953 under a Franco-Khmer convention. This contributed to the termination of the French colony and protectorate, and Cambodia obtained its own authentic military organization. The FARK's roles were defined as follows: to guarantee the sovereignty of the nation and of the king; to ensure security, social order and the respect of law; and to defend the Kingdom of Cambodia. With less than 35,000 troops, FARK was organized at battalion level under the Supreme Commander of the Armed Forces, the Head of State.

The military situation changed dramatically following the coup d'état in March 1970. In the Khmer Republic regime, FARK was renamed "Khmer National Armed Forces" (Forces Armées Nationales Khmeres – FANK). When Cambodia real war followed, and in response to a declared state of emergency, the FANK's size was expanded to reach approximately 200,000 military personnel organized in brigades and divisions. The armed forces of all categories were placed under command and control of the President.

After the fall of the Khmer Republic regime in April 1975, the Khmer Rouge established a new military force called National Army of Democratic Kampuchea (NADK). It was purely composed of Khmer Rouge fighters. Similar to other forces, the NADK was organized up to division level and under command of the Chief of the General Staff.

Roundel of the People's Republic of Kampuchea

Following the intervention of the Vietnamese forces in January 1979, which resulted in the collapse of the Khmer Rouge regime and because of the effect of the Cold War, a new force was re-created in Cambodia: The Kampuchean People's Revolutionary Armed Forces, which later changed its name to the Cambodian People's Armed Forces (CPAF) of the Phnom Penh government, was rebuilt. This military organization evolved, in terms of size and organization, from battalions to divisions.

In the meantime, anti-Vietnamese movements were formed along the Cambodian-Thai border. Apart from the remained NADK, two other non-communist resistance forces, the Khmer People's National Liberation Armed Forces (KPNLAF) and the Armées Nationale pour Khmer Independent – ANKI (previously called Armées Nationale Sihanoukist – ANS) were established. The military evolution of the last two movements was similar in character: from small armed groups to divisions.

Because of the influence of the Cold War's ideological contest, and the interference of some global powers, Cambodia found itself in an insecure environment. This remained the case for more than 20 years after 1970, and was only resolved through the Peace Accords signed in Paris in October 1991.

In order to put security problems to an end, the Government commenced its Win Win policy in mid 1995. The policy was to end the internal security crisis through national reconciliation and national unity efforts, under the rule of the King of Cambodia. Subsequent defections NADK units began in early 1996. The Win Win policy of Samdech Prime Minister Hun Sen continued to succeed as the last groups of the Khmer Rouge guerrillas were integrated into the RCAF in late 1998. It historically marked the total dissolution of the Khmer Rouge's political and military organs and the return of all secession areas to government control.

The RCAF now has to continue reforms, so as to be in-line with the Government's political guidelines. These guidelines direct the armed forces to demobilize to an acceptable size, achieve sound capability, and inculcate high ethics and dignity, with advancement towards international standardization in the future. The RCAF also has to plan for its agenda to include security cooperation for the common benefit of the whole region.

The Royal Gendarmerie of Cambodia is a paramilitary unit with about 7,000 soldiers deployed in all provinces. It is head quartered in Phnom Penh. The unit's chain of command is through the Royal Cambodian Armed Forces High Command and commanded by a Lieutenant General, currently Lt-General Sao Sokha. The Royal Gendarmerie of Cambodia is deployed in every province and cities to keep law and order. After the penal procedure code had been passed the military police in Cambodia play an important role in Cambodia society which keep law and orders in cities like the National Police, an important tasks that had been revoked sub decree in 2002. Every provincial gendarmerie is commanded by a colonel, after 1 January 2009 by a brigadier general, except in the capital of Phnom Penh where it is commanded by brigadier general since it is created. [4]