The Royal Thai Armed Forces (Thai: กองทัพไทย: Kongthap Thai) is the name of the military of the Kingdom of Thailand. It consists of the following branches:

Created in 1852, the Royal Thai Armed Forces came into existence as permanent force at the behest of King Mongkut, who needed a European trained military force in order to thwart any western threat and any attempts at colonialization. By 1887 during the next reign, King Chulalongkorn a permanent military command in the Kalahom Department was established. However the office of Kalahom and the military of Siam had existed since the days of the Sukhothai Kingdom in the 13th Century.[1] In fact the history of the Kings of Siam is teeming with tales of military conquest and power.[2] However since 1932, when the military, with the help of civilians, decided to overthrow the system of absolute monarchy and instead created a constitutional system, the military has dominated and been in control of Thai politics, providing it with many Prime Ministers and carrying out many Coup d'états, the most recent being in 2006.

According to the Constitution of the Kingdom, serving in the Armed Forces is a duty of all Thai citizens.[5] However only males over the age of 21 who have not gone through reserve training are subjected to a random draft. Those chosen randomly are subjected to twenty-four months fulltime service, while volunteers are subjected to eighteen months service, depending on their education.

The Royal Thai Armed Forces Day is celebrated on January 18 to commemorate the victory of King Naresuan the Great in battle against the Vice-King of Burma in 1593.

The Royal Thai Armed Forces’ main role is the protection of the sovereignty and territorial integrity of the Kingdom of Thailand. The Armed Forces is also charged with the defence of the aristocracy and the Monarchy of Thailand against all threats both foreign and domestic.[6]

Apart from these roles, the Armed Forces also have responsibilities to ensure public order and participating in social development programs by aiding the civilian government. The Armed Forces is also charged with assisting victims of national disasters and drug control.

In recent years the Royal Thai Armed Forces has begun increasing its role on the international stage by providing Peacekeeping forces to the United Nations (UN), in the International Force for East Timor (INTERFET), from 1999 to 2002.[7] And participating in the Multinational force in Iraq and the mission there; providing 423 personnel from 2003 to 2004.[8]

The Royal Thai Armed Forces was involved in many conflicts throughout its history, including global, regional and internal conflicts. However most these were within Southeast Asia. The only two foreign incursions into Thai territory was in December 1941 when the Empire of Japan invaded then occupied the country, and in the 1980s with the Vietnamese incursions into Thailand that led to several battles with the Thai military. Operations on foreign territory were either territorial wars or conflicts mandated by the United Nations.

The Siamese Expeditionary Force in Paris, 1919. 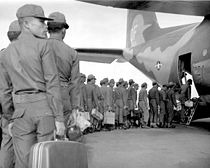 Thai soldiers boarding a USAF aircraft, during the Vietnam War.

Thai and U.S. military training together during COBRA Gold 2001.

To build institutional solidarity and esprit de corps, each Thai service component developed its own distinctive uniforms, ranking system, and insignia. Many Thai military uniforms reflected historical foreign influences. For example, most of the distinctive service uniforms were patterned on those of the United States, but lower ranking enlisted navy personnel wore uniforms resembling those of their French counterparts. The early influence of British advisers to the Thai royal court and the historical role of the military in royal pomp and ceremony contributed to the splendor of formal dress uniforms worn by high-ranking officers and guards of honor for ceremonial occasions.

The rank structures of the three armed services were similar to those of the respective branches of the United States Armed Forces, although the Thai system had fewer NCO and warrant officer designations. The King, as head of state and constitutional head of the armed forces, personally granted all commissions for members of the officer corps. Appointments to NCO ranks were authorized by the minister of defense. In theory, the authority and responsibilities of officers of various ranks corresponded to those of their American counterparts. However, because of a perennial surplus of senior officers—in 1987 there were some 600 generals and admirals in a total force of about 273,000—Thai staff positions were often held by officers of higher rank than would have been the case in the United States or other Western military establishments.

Thai military personnel were highly conscious of rank distinctions and of the duties, obligations, and benefits they entailed. Relationships among officers of different grades and among officers, NCOs, and the enlisted ranks were governed by military tradition in a society where observance of differences in status was highly formalized. The social distance between officers and NCOs was widened by the fact that officers usually were college or military academy graduates, while most NCOs had not gone beyond secondary school. There was often a wider gap between officers and conscripts, most of whom had had even less formal education, service experience, or specialized training.

Formal honors and symbols of merit occupied an important place in the Thai military tradition, and service personnel received and wore awards and decorations with pride. The government granted numerous awards, and outstanding acts of heroism, courage, and meritorious service received prompt recognition.