The name of Petach Tikva was chosen by its founders in 1878 from the prophecy of Hosea (2:17), "And I will give her vineyards from thence, and the Valley of Achor for an opening of hope: and she shall sing there, as in the days of her youth, and as in the day when she came up out of the land of Egypt." 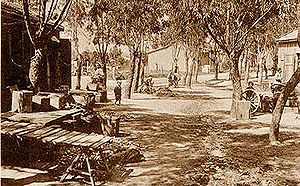 Petah Tikva was founded in 1878 by religious pioneers from Europe, who were led by Yehoshua Stampfer, Moshe Shmuel Raab, Yoel Moshe Salomon, Zerach Barnett, and David Gutmann, as well as Lithuanian Rabbi Aryeh Leib Frumkin.[2] It was the first modern Jewish agricultural settlement in Ottoman Palestine (hence its nickname as "Mother of the Moshavot") and has since grown to become one of Israel's most populous urban centres.

Originally intending to establish a new settlement in the Achor Valley, near Jericho, the pioneers purchased land in that area. However, Abdülhamid II cancelled the purchase and forbade them from settling there, but they retained the name Petah Tikva as a symbol of their aspirations.

Undaunted, the settlers purchased a modest area (3.40 square kilometers) from the village of Mulabbis (variants: Mlabbes, Um-Labbes), near the source of the Yarkon River. The Sultan allowed the enterprise to proceed, but because their purchase was located in what was a malarial swamp, they had to evacuate when the malaria spread, founding the town of Yehud near the Arabic village Yehudiyya about 20 kilometres (12 mi) to the south.[citation needed] With the financial help of Baron Edmond de Rothschild they were able to drain the swamps sufficiently to be able to move back in 1883, joined by immigrants of the First Aliyah, and later the Second Aliyah.

During the Sinai and Palestine Campaign of World War I, Petah Tikva served as a refugee town for residents of Tel Aviv and Jaffa, following their exile by the Ottoman authorities due to their refusal to serve the Ottoman army to fight the invading British forces. The town suffered heavily as it lay between the Ottoman and British fronts during the war.

Petah Tikva became the school for thousands of pioneer workers, who studied the craft of farming there before they ventured out to establish dozens of settlements in all parts of the country. The agricultural schools are still active to this day. Petah Tikva was also the birthplace of the Labor Zionist Movement, inspired and encouraged by the writings of A. D. Gordon who lived in the town.

The first recorded Arab attack on Jews in what would become Israel took place in Petah Tikva in 1886.[3] Petah Tikva was also the scene of Arab rioting in May 1921, which left four Jews dead.[4]

In the 1930s, the pioneering founders of Kibbutz Yavneh from the Religious Zionist movement immigrated to the British Mandate of Palestine, settling near Petah Tikva on land purchased by a Jewish-owned German company. Refining the agricultural skills they learned in Germany, these pioneers began in 1941 to build their kibbutz in its intended location in the south of Israel, operating from Petah Tikva as a base.

In the early 1920s, industry began to develop in the Petah Tikva region. In 1921, Petah Tikva was given the status of a local council by the British authorities, and in 1937 it was recognized as a city. Its first mayor, Shlomo Stampfer, was the son of one of its founders, Yehoshua Stampfer. 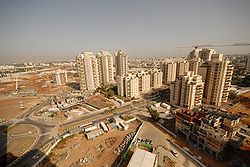 After the creation of the State of Israel in 1948, several adjoining villages – Amishav and Ein Ganim to the east (named after the biblical village (Joshua 15:34)), Kiryat Matalon to the west, towards Bnei Brak, Kfar Ganim and Mahaneh Yehuda to the south and Kfar Avraham on the north – were merged into the municipal boundaries of Petah Tikva, giving it a significant population boost to 22,000.

Nowadays, with a population of over two hundred thousand inhabitants Petah Tikva is the third most populous city in the Tel Aviv Metropolitan Area ("Gush Dan"). 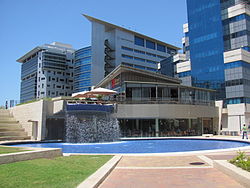 Petah Tikva is the second-largest industrial sector in Israel after the northern city of Haifa. The industry is divided into three zones—Kiryat Aryeh (named after Aryeh Shenkar), Kiryat Matalon (named after Moshe Yitzhak Matalon), and Segula, and includes textiles, metalwork, carpentry, plastics, processed foods, tires and other rubber products, and soap.

Numerous high-tech companies and start-ups have moved into the industrial zones of Petah Tikva, which now house the Israeli headquarters for the Oracle Corporation, IBM, Intel, Alcatel-Lucent, ECI Telecom, and GlaxoSmithKline Pharmecuticals. The largest data center in Israel, operated by the company TripleC, is also located in Petah Tikva.[5] Furthermore, the Israeli Teva company, the world's largest generic drug manufacturer is headquartered in Petah Tikva, whilst one of Israel's leading food processing corporations, Osem opened in Petah Tikva in 1976 and has since been joined by the company's administrative offices, distribution center and sauce factory.

Over time, the extensive citrus groves that once ringed Petah Tikva have disappeared as real-estate developers acquired the land for construction projects. Many new neighborhoods are going up in and around Petah Tikva. A quarry for building stone is located east of Petah Tikva.

As well as general hi-tech firms, Petah Tikva has developed a position as a base for many communications firms. As such, the headquarters of the Bezeq International international phone company is located in the Kiryat Matalon industrial zone as are those of the 012 Smile Internet Service Provider. The headquarters of Tadiran Telecom are in the Ramat Siv industrial zone. Arutz Sheva, the right wing Religious Zionist Israeli media network operates an internet radio studio in Petah Tikva, where Arutz Sheva internet TV is located as well as the printing press for its B'Sheva newspaper.

The Israeli secret service, Shin Bet, has an interrogation facility in Petah Tikva.[6] 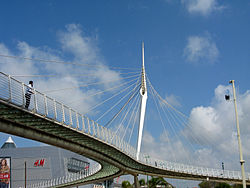 Petah Tikva is served by a large number of buses. A large number of intercity Egged buses stop there, and the city has a network of local buses operated by the Kavim company. The Dan bus company operates lines to Ramat Gan, Bnei Brak and Tel Aviv.

Petah Tikva's largest bus terminal is the Petah Tikva Central Bus Station (Tahana Makazit), while other major stations are located near Beilinson Hospital and Beit Rivka. A rapid transit/light rail system is in the works which will connect Petah Tikva to Bnei Brak, Ramat Gan, Tel Aviv and Bat Yam.

Santiago Calatrava's bridge, a 164 feet (50 m) long span Y-shaped cable-stayed pedestrian bridge connecting Rabin Hospital to a shopping mall, a residential development and a public park. The structure is supported from a 95-foot (29 m) high inclined steel pylon, which is situated where the three spans intersect. Light in construction, the bridge is built principally of steel with a glass-paved deck.[7] 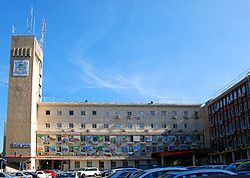 Petah Tikva's history of government goes back to 1880, when the pioneers elected a council of seven members to run the new colony. From 1880 to 1921, members of the council were David Meir Guttman, Yehoshua Stampfer, Ze'ev Wolf Branda, Abraham Ze'ev Lipkis, Yitzhak Goldenhirsch, Chaim Cohen-Rice, Moshe Gissin, Shlomo Zalman Gissin and Akiva Librecht. This governing body was declared a local council in 1921, and Petah Tikva became a city in 1937. Kadima, the political party founded by former Israeli prime minister Ariel Sharon and now headed by Tzipi Livni, has its headquarters in Petah Tikva.[8] In 2007, the discovery of a group of Neo-Nazi teenagers, Patrol 35, formed by immigrants from the former Soviet Union with some Jewish ancestry shocked the country.[9] 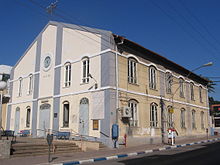 Petah Tikva is home to 300 educational institutions from kindergarten through high school, catering to the secular, religious and Haredi populations. There are over 43,000 students enrolled in these schools, which are staffed by some 2,400 teachers. In 2006, five schools participated in the nationwide Mofet program, which promotes academic excellence.[citation needed] Petah Tikva has nine public libraries, the main one located in the city hall building.

Petah Tikva has two cemeteries: Segula Cemetery, east of the city, and Yarkon Cemetery, to the northeast.

Petah Tikva is divided into 33 neighborhoods for municipal purposes:[14] 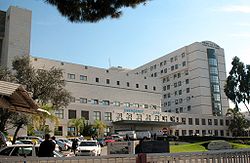 Petah Tikva has the most extensive health coverage of any city in Israel relative to the size of its population.[citation needed] Six hospitals are located in the city. The Rabin Medical Center Beilinson complex includes the Beilinson Medical Center, the Davidoff Oncologic Center, the Geha Psychiatric Hospital, the Schneider Pediatric Hospital and Tel Aviv University's Faculty of Medical Research. Other medical facilities in Petah Tikva are HaSharon Hospital, the Beit Rivka Geriatric Center, the Kupat Holim Medical Research Center and a private hospital, Ramat Marpeh, affiliated with Assuta Hospital. The Schneider Pediatric Center is one of the largest and most modern children's hospitals in the Middle East. In addition, there are many family health clinics in Petah Tikva as well as Kupat Holim clinics operated by Israel's Health maintenance organizations. 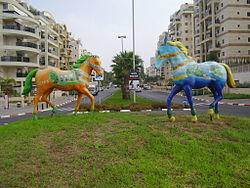 During the Second Intifada, Petah Tikva suffered three terrorist attacks: On May 27, 2002, a suicide bomber blew himself up at a small cafe outside a shopping mall, leaving two dead, including a baby;[15] on December 25, 2003, a suicide bomber blew himself up at a bus stop near the Geha bridge, killing 4 civilians, and on February 5, 2006, a Palestinian got into a shuttle taxi, pulled out a knife, and began stabbing passengers killing two of them, but a worker from a nearby factory hit him with a log, subduing him. 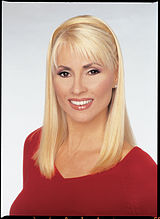 Petah Tikva is twinned with: