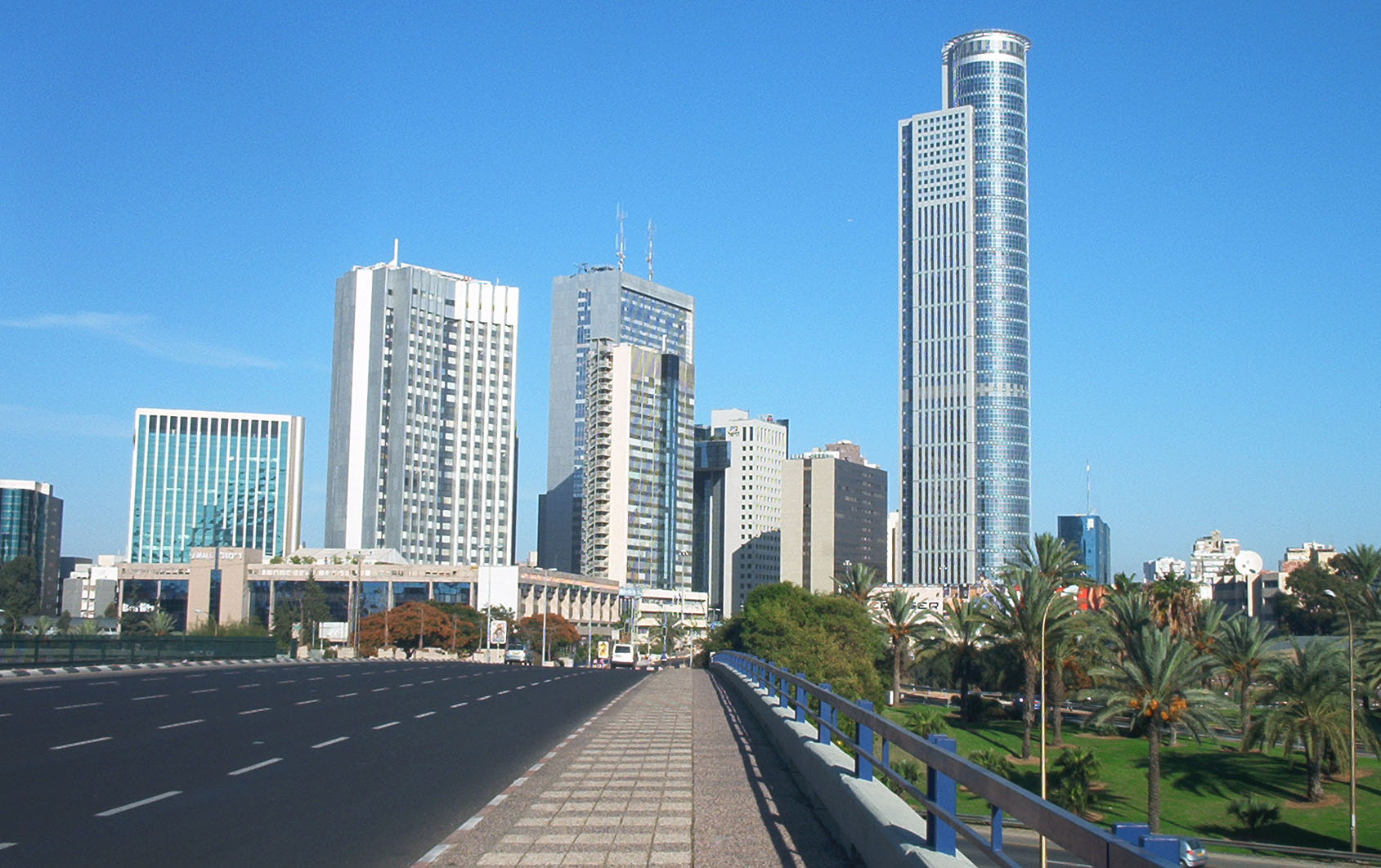 Ramat Gan ( _he. רָמַת גַּן) is a city in the Tel Aviv district of , which borders to its west. It houses Israel's national football stadium, , an advanced medical center (), and a national park. It is also the home of one of the world's major diamond exchanges, in which Israel's tallest building, the , is located. The city was established in 1921 as a , a communal settlement, with a focus on agriculture. After commercial and population expansion, it was declared a city in 1950, and, as of 2006, had 129,700 residents. The mayor of Ramat Gan is .

Ramat Gan was established by the Ir Ganim (lit: "Town of Gardens") [citeweb |url=http://www.crwflags.com/fotw/flags/il-rg.html |title=Ramat Gan (Israel) |accessdate=2008-04-06] association in 1921 as a satellite town of . There are varying records as to whether the first plots of land here were purchased in 1914 or 1918.

The city's grew steadily, as new structures such as , the national stadium, Bar Ilan University, and the Diamond Exchange were developed.

Ramat Gan is located in the , metropolitan area to the east of Tel Aviv. The northern boundary of the city is the , the eastern meets with , whilst is to the south west of the city.

Ramat Gan's economy is most notable for the in the northwest of the city, home to a large concentration of , including (City Gate), Israel's tallest at over 240 meters, the Diamond Exchange (a world leader in fancy-cut ), a large Sheraton hotel, and many businesses including the headquarters of . The area was formerly a nightly center of and unlawful , but in 2006, following a new law [ [http://www.ynetnews.com/articles/0,7340,L-3316286,00.html Knesset approves harsh punishments for human trade - Israel News, Ynetnews ] ] , the police detained criminals related to prostitution and sex trafficking, and these activities disappeared. [cite web|url=http://news.walla.co.il/?w=//1007942|title=Decline in Human Trafficking for Prostitution|publisher= lang he] Also located in the Diamond Exchange District is the 's Israeli headquarters and the headquarters of the , whilst the embassies of , , the , , , , , and the , are located in the area. [cite news|url=http://www.jpost.com/servlet/Satellite?cid=1207159749133&pagename=JPost%2FJPArticle%2FShowFull |title=Diamond Exchange Area turns into luxury residential spot |accessdate=2008-04-06 |publisher=Jerusalem Post] A number of other international embassies are also located in the city, as is the . Also headquartered in the city is the trade union. Located to the south of Ramat Gan is the , the largest waste dump in the Middle East.

In 2008, construction is expected to begin on the , set to exceed the City Gate Tower in height, to be constructed on the site of the historic factory. As a tribute to the history of the site, the lower floors of the tower are planned to house a chocolate museum. [ [http://www.ynetnews.com/articles/0,7340,L-3225729,00.html Trump to build projects in Israel - Israel Money, Ynetnews ] ] The tower is set to contain luxury apartments, with an average price tag of $1 million each.

Ramat Gan is home to a number of theaters including the , , and the . Furthermore, the is based in the city and performs regularly. Ramat Gan has two cinemas, the Lev-Elram Cinema and the "Yes Planet" megaplex.

Ramat Gan has a number of museums. The history of the city is told in Beit Abraham Krinizi, the home of the first mayor of the city, , whilst the tells the story of the .

The is the only gallery in Israel dedicated solely to Israeli artwork, whilst the adjoining houses the converted homes of the artists, Kahana, Constant and . Constant House is a sculpture gallery, Kahana House a ceramics studio of ceramics, and Rapoport House the permanent home of the artist's sculptures. Other galleries in the city include the Museum of Russian Art, , and the , the only gallery in Israel dedicated to Far Eastern artwork.

The city includes where the , the Jewish Olympics, are held every 4 years. The city is also the location of the , Israel's national football stadium which seats some 41,583 and is the largest stadium in the country.

In basketball, plays in Ligat HaAl, the top division.

Ramat Gan is home to Israel's second largest university, , with 24,000 students. The city is also the location of the , , and acting college. [citeweb |url=http://www.ramat-gan.muni.il/RamatGan/sister-cities/City+Guide/Academic+Institutes/ |title=Academic Institutes |accessdate=2008-04-06]

The located in southeastern Ramat Gan and , is Israel's largest hospital.