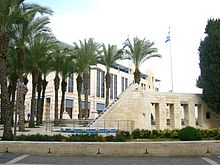 Headquarters of the Jerusalem Municipality

A City council (Hebrew: עירייה‎, Iriya) is the official designation of a city within Israel's system of local government.

City council status may be granted by the Interior Minister to a municipality, usually a local council, whose population surpasses 20,000 and whose character is urban, defined as having areas zoned for distinct land use like residential, commercial, and industrial areas. Israeli cities in the Judea and Samaria area need additional approval from the commanding general of the Israeli Central Command, who is the de facto administrator of the area.[citation needed]