Leader of the Opposition (Israel)

Leader of the Opposition (Israel) 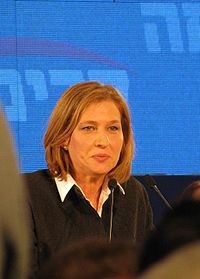 Tzipi Livni, The current Leader of the Opposition

Until 2000, the role of the Opposition Leader was not an official position, but rather an honorary role. The Leader of the Opposition used to be the leader of the largest party not within the government, which was also the second largest party in the Israeli parliament, the Knesset, either Likud Party or Israeli Labor Party, in all their versions. However, the party leading the coalition had never won the majority in the Knesset, but rather maintained it through a majority coalition building process within the Knesset. Over half a century (except for two occasions), either the Likud party or the Labor party, in all their versions, had formed the government (i.e. the Cabinet), without the other rival party joining the government, and thus except for these two occasions, wherein 1967–1970, Golda Meir and Levi Eshkol, and in 1984–1988, Shimon Peres and Yitzhak Shamir had formed a National Unity Government, consisting of the two major rival parties, the Opposition Leader had always been the chairman of either the Likud party or the chairman of Labor, and It is commonly said[by whom?] that during that period, wherein the two major rivals parties were joined by a unity government, there were practically no opposition in the Knesset.

Even with the absence of a law defining the role of the Opposition Leader until year 2000, it was customary to conduct update meetings between the Prime Minister and the chairman of the largest party not within the government. However, it was carried out only accordingly to the Prime Minister's decision, and thus the Knesset had to pass a legislation that will anchor the position of the Opposition Leader, in order to strengthen the Opposition's status as an oversight apparatus to the operations of the installed government's activities.

In early 2000, two bills requiring to amend the Opposition Leader's status were submitted to the knesset. One was a "Government bill" (bill initiated by the government), and the other was a "private members' bill" (Initiated by a single or a group of Knesset Members), submitted by MK Uzi Landau. The bills were merged into one amendment, and on 17 July, 2000, the Knesset had approved Amendment 8. to the "Knesset Law" of 1994 [1], wherein chapter 6 within this law was added, and had outlined the role of the Leader of the Opposition.

The law stipulates the selection of the Opposition Leader, his replacement, regulates his ceremonial role in various official events, and obliges the prime minister to update him on current state affairs once a month. The law also stipulates that the Opposition Leader's salary will be determined by knesset committee, and shall not be lower than a salary of a Cabinet minister.

The problematics of the legislation

In one example, where these concerns where actually practiced, was in 2005, when the secularist party of Shinui was forced to leave the governing coalition, and the chairman of that party, then MK Tommy Lapid was selected to head the opposition in the Knesset, while the religious-orthodox parties, United Torah Judaism and Shas, refused to recognize his authority and claimed he did not represent them.