Hosea
For the prophetic book, see Book of Hosea.
See also Hoshea, who has the same name in Biblical Hebrew. 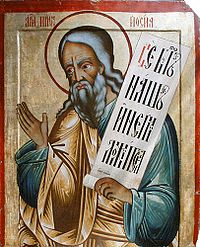 /ˌhoʊˈzeɪ.ə/; Hebrew: הוֹשֵׁעַ, Modern Hoshea Tiberian Hôšēăʻ ; "Salvation", Greek Ὠσηέ = Ōsēe) was the son of Beeri and a prophet in Israel in the 8th century BC. He is one of the Twelve Prophets of the Jewish Hebrew Bible, also known as the Minor Prophets of the Christian Old Testament. Hosea is often seen as a "prophet of doom", but underneath his message of destruction is a promise of restoration. The Talmud (Pesachim 87a) claims from God that he was the greatest prophet of his generation, which included the more famous Isaiah.

Little is known about the life or social status of Hosea. According to the Book of Hosea, he married the prostitute Gomer, the daughter of Diblaim, at God's command.[1] He lived in the Northern Kingdom in the period 780–725 BC. In Hosea 5:8 ff., there is a reference to the wars which led to the capture of the kingdom by the Assyrians (ca. 734–732 BC). It is not certain if he has also experienced the destruction of Samaria, which is foreseen in Hosea 14:1.

Hosea's family life reflected the "adulterous" relationship which Israel had built with polytheistic gods. The relationship between Hosea and Gomer parallels the relationship between God and Israel. Even though Gomer runs away from Hosea and sleeps with another man, he loves her anyway and forgives her. Likewise, even though the people of Israel worshipped other gods, God continued to love them and did not abandon his covenant with them.

One of the early writing prophets, Hosea used his own experience as a symbolic representation of God and Israel: God the husband, Israel the wife. Hosea's wife left him to go with other men; Israel left the Lord to go with other gods. Hosea searched for his wife, found her and brought her back; God would not abandon Israel and brought them back even though they had forsaken him.

The book of Hosea was a severe warning to the northern kingdom against the growing idolatry being practiced there; the book was a dramatic call to repentance. Christians extend the analogy of Hosea to Christ and the church: Christ the husband, his church the bride. Christians see in this book a comparable call to the church not to forsake the Lord Jesus Christ. Christians also take the buying back of Gomer as the redemptive qualities of Jesus Christ's sacrifice on the cross.

Other preachers, like Charles Spurgeon, saw Hosea as a striking presentation of the mercy of God in his sermon on Hosea 1:7 titled The LORD's Own Salvation. “But I will have mercy upon the house of Judah, and will save them by the Lord their God, and will not save them by bow, nor by sword, nor by battle, by horses, nor by horsemen.”-Hosea 1:7 in his sermon NO. 2057, December 16TH, 1888.

The Qur'an mentions only some prophets by name, but makes it clear that many were sent who are not mentioned[2]. Therefore, many Muslim scholars, both classical (Ibn Ishaq) and modern (Reza Aslan[3]), speak of Hosea as one of the true Hebrew prophets of Israel. The Book of Hosea has also been used in Qur'anic exegesis by Abdullah Yusuf Ali, especially in reference to Qur'anic verses which speak of the backsliding of Israel[4].