Habakkuk
This article is about Habakkuk, a biblical prophet. For other uses, see Habakkuk (disambiguation). 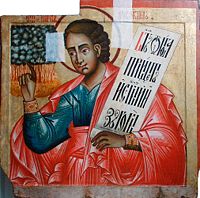 Statue of Habakkuk by Donatello, in the Museo dell'Opera del Duomo of Florence.

/həˈbækək/ or /ˈhæbəˌkʊk/; Hebrew: חֲבַקּוּק‎, Standard Ḥavaqquq Tiberian Ḥăḇaqqûq), also spelled Habacuc, was a prophet in the Hebrew Bible. The etymology of the name of Habakkuk is not clear.[1] The name is possibly related to the Akkadian khabbaququ, the name of a fragrant plant,[1] or the Hebrew root חבק, meaning "embrace". He is the eighth of the twelve minor prophets and likely the author of the Book of Habakkuk, which bears his name.[1]

Practically nothing is known about Habakkuk's personal life, except for what can be inferred from the text of his book. However, Habakkuk does appear in Bel and the Dragon, which is part of the Additions to Daniel found in the Biblical apocrypha. Verses 33-39 state that Habakkuk is in Judea and after making some stew, he’s told by an angel to take the stew to Daniel, who is in Babylon in the lion’s den. After proclaiming he is unaware of both the den and Babylon, Habbakuk is transported to the den with Daniel via the angel. Habakkuk gives Daniel the food to sustain him, and is immediately taken back to “his own place.” Habakkuk is also mentioned in Lives of the Prophets, which also notes his time in Babylon. [2] The book of Habbakuk consists of five oracles about the Chaldeans (Babylonians) and a song of praise to God. Since the Chaldean rise to power is dated c. 612 BC, it is assumed he was active about that time, making him an early contemporary of Jeremiah and Zephaniah. Jewish sources, however, do not group him with those two prophets, who are often placed together, so it is possible that he was slightly earlier than they. Because the final chapter of his book is a song, it is sometimes assumed in Jewish tradition that he was a member of the tribe of Levi, which served as musicians in Solomon's Temple. According to the Zohar (Volume 1, page 8b) Habakkuk is the boy born to the Shunamite woman through Elisha's blessing. Habakkuk is unique among the prophets in that he openly questions the wisdom of God (1:3a, 1:13b). In the first part of the second chapter, the Prophet sees the injustice among his people and asks why God does not take action: "1:2 Yahweh, how long will I cry, and you will not hear? I cry out to you 'Violence!' and will you not save?" - (World English Bible). 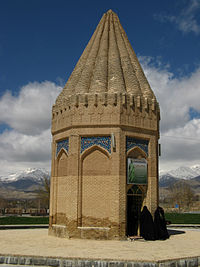 Shrine of Habakkuk in Toyserkan, Iran.

A mausoleum in the city of Toyserkan in the west of Iran is believed to be Habakkuk's burial place.[3] It is protected by Iran's Cultural Heritage Organization. The Organization's guide to the Hamedan Province states that Habakkuk was believed to be a guardian to the Temple of Solomon, and that he was captured by the Babylonians and remained in their prison for some years. After being freed by Cyrus the Great, he went to Ecbatana and remained there until he died, and was buried somewhere nearby, in what is today Toyserkan. Habakkuk is called both Habaghugh and Hayaghugh by the locals.

On the Eastern Orthodox liturgical calendar, his feast day is December 2. He is commemorated with the other Minor prophets in the Calendar of saints of the Armenian Apostolic Church on July 31.

This article incorporates text from the 1901–1906 Jewish Encyclopedia, a publication now in the public domain.