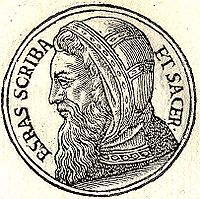 Site traditionally described as the tomb of Ezra at Al Uzayr near Basra.

/ˈɛzrə/; Hebrew: עזרא, Ezra[1]; fl. 480–440 BC), also called Ezra the Scribe (Hebrew: עזרא הסופר, Ezra ha-Sofer) and Ezra the Priest in the Book of Ezra. According to the Hebrew Bible he returned from the Babylonian exile and reintroduced the Torah in Jerusalem (Ezra 7-10 and Neh 8). According to First Esdras, a non-canonical Greek translation of the Book of Ezra, he was also a high priest.

His name may be an abbreviation of Azaryahu, "God-helps". In the Greek Septuagint the name is rendered Esdras (Greek: Ἔσδρας), from which Latin: Esdras.

The Book of Ezra describes how he led a group of Judean exiles living in Babylon to their home city of Jerusalem (Ezra 8.2-14) where he enforced observance of the Torah and cleansed the community of mixed marriages.[2][3]

Ezra, known as "Ezra the scribe" in Chazalic literature,[4] is a highly respected figure in Judaism.[5]

In the Hebrew Bible

The canonical Book of Ezra and Book of Nehemiah contain the oldest source that describes the activity of Ezra,[3] whereas many of the younger books ascribed to Ezra (First Esdras, 3-6 Ezra) are younger literary works dependent on the canonical books of Ezra and Nehemiah.

The books of Ezra and Nehemiah were originally one scroll. (Nehemiah 3:32, footnote)[6] Later the Jews divided this scroll and called it First and Second Ezra. Modern Hebrew Bibles call the two books Ezra and Nehemiah, as do other modern Bible translations. A few parts of the Book of Ezra (4:8 to 6:18 and 7:12:12-26) were written in Aramaic, and the majority in Hebrew, Ezra himself being skilled in both languages.[7][8] Ezra, a descendant of Seraiah the high priest, was living in Babylon when in the seventh year of Artaxerxes, king of Persia, the king sent him to Jerusalem to teach the laws of God to any who did not know them. Ezra led a large body of exiles back to Jerusalem, where he discovered that Jewish men had been marrying non-Jewish women. He tore his garments in despair and confessed the sins of Israel before God, then braved the opposition of some of his own countrymen to purify the community by enforcing the dissolution of the sinful marriages. Some years later Artaxerxes sent Nehemiah, a Jewish noble in his personal service, to Jerusalem as governor with the task of rebuilding the city walls. Once this task was completed Nehemiah had Ezra read the Law of Moses (the Torah) to the assembled Jews, and the people and priests entered into a covenant to keep the law and separate themselves from all other peoples.

1 Esdras, probably from the late 2nd/early 1st centuries BCE, preserves a Greek text of Ezra and a part of Nehemiah distinctly different from that of Ezra-Nehemiah - in particular it eliminates Nehemiah from the story and gives some of his deeds to Ezra, as well as telling events in a different order. Scholars are divided on whether it is based on Ezra-Nehemiah, or reflects an earlier literary stage before the combination of Ezra and Nehemiah accounts.

The first century Jewish historian, Josephus, deals with Ezra in his Antiquities of the Jews. He preferred 1 Esdras over the canonical Ezra–Nehemiah and placed Ezra as a contemporary of Xerxes son of Darius, rather than of Artaxerxes.[9]

The apocalyptic fourth book of Ezra (also called the second book of Esdras) was written c.AD 100, probably in Hebrew-Aramaic. It was one of the most important sources for Jewish theology at the end of the 1st century. In this book, Ezra has a seven part prophetic revelation, converses with an angel or God three times and has four visions. Ezra, thirty years into the Babylonian Exile (4 Ezra 3:1 / 2 Esdras 1:1), recounts the siege of Jerusalem and the destruction of Solomon's Temple.[2] This would place these revelations in the year 557 BC, a full century before the date given in the canonical Ezra. The central theological themes are "the question of theodicy, God's justness in the face of the triumph of the heathens over the pious, the course of world history in terms of the teaching of the four kingdoms,[10] the function of the law, the eschatological judgment, the appearance on Earth of the heavenly Jerusalem, the Messianic Period, at the end of which the Messiah will die,[11] the end of this world and the coming of the next, and the Last Judgment."[2] Ezra restores the law that was destroyed with the burning of the Temple in Jerusalem. He dictates 24 books for the public (i.e. the Hebrew Bible) and another 70 for the wise alone (70 unnamed revelatory works).[12] At the end, he is taken up to heaven like Enoch and Elijah.[2] Ezra is seen as a new Moses in this book.[2]

There is also another work, thought to be influenced by this one, known as the Greek Apocalypse of Ezra. 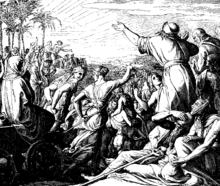 In Rabbinic traditions, Ezra is metaphorically referred to as the "flowers that appear on the earth" signifying the springtime in the national history of Judaism. A disciple of Baruch ben Neriah, he favored study of the Law over the reconstruction of the Temple and thus because of his studies, he did not join the first party returning to Jerusalem in the reign of Cyrus. According to another opinion, he did not join the first party so as not to compete, even involuntarily, with Jeshua ben Jozadak for the office of chief priest.[13] According to Bamidbar Rabbah, Ezra was doubtful of the correctness of some words in the Torah and said, "Should Elijah... approve the text, the points [ed: dots that he scribed above the letters] will be disregarded; should he disapprove, the doubtful words will be removed from the text".[13][14]

According to tradition, Ezra was the writer of the Books of Chronicles.[13]

In the Syrian village of Tedef, a shrine said to be the burial place of Ezra has been venerated by Jews for centuries. Another tradition locates his tomb near Basra, Iraq.

Early Christian writers occasionally cited Ezra as author of the apocalyptic books attributed to him. Clement of Alexandria in his Stromata referred to Ezra as an example of prophetic inspiration, quoting a section from 2 Esdras.[15]

In Islam he is known as Uzair (Arabic: عزير). He was mentioned in the Qur'an. Although he was not mentioned as as one of the Prophets of Islam, he is considered as one of them by some Muslim scholars, based on Islamic traditions.[16][17] His tomb at Al-ʻUzair on the banks of the Tigris near Basra, Iraq, is a pilgrimage site for the local Marsh Arabs.[18][19]

Mary Joan Winn Leith in The Oxford History of the Biblical World believes that Ezra was an historical figure whose life was enhanced in the scripture and given a theological buildup.[20] Gosta W. Ahlstrom argues the inconsistencies of the biblical tradition are insufficient to say that Ezra, with his central position as the 'father of Judaism' in the Jewish tradition, has been a later literary invention.[21] Those who argue against the historicity of Ezra argue that the presentation style of Ezra as a leader and lawgiver resembles that of Moses. There are also similarities between Ezra the priest-scribe (but not high priest) and Nehemiah the secular governor on the one hand and Joshua and Zerubbabel on the other hand. The early 2nd century Jewish author Ben Sira praises Nehemiah, but makes no mention of Ezra.[20]

Scholars are divided over the chronological sequence of the activities of Ezra and Nehemiah. Ezra came to Jerusalem "in the seventh year of Artaxerxes the King".[22] The text does not specify whether the king in the passage refers to Artaxerxes I (465-424 BCE) or to Artaxerxes II (404-359 BCE).[23][24] Most scholars hold that Ezra lived during the rule of Artaxerxes I, though some have difficulties with this assumption:[3] Nehemiah and Ezra "seem to have no knowledge of each other; their missions do not overlap;[25] and no reflection of Ezra's activity appears in Jerusalem of Nehemiah."[26] These difficulties have led many scholars to assume that Ezra arrived in the seventh year of the rule of Artaxerxes II, i.e. some 50 years after Nehemiah. This assumption would imply that the biblical account is not chronological. The last group of scholars regard "the seventh year" as a scribal error and hold that the two men were contemporaries.[3][27]

Esdras, about the classification of the books adscribed to Ezra: Book of Ezra (and Book of Nehemiah for the non-rabbinical tradition, combined with the former into Ezra-Nehemiah), 1 Esdras and 2 Esdras