The Jerusalem Post is an Israeli daily English-language broadsheet newspaper, founded on December 1, 1932 by Gershon Agron as The Palestine Post. The daily readership numbers (tens of thousands) do not approach those of the major Hebrew newspapers.

While it was once regarded as left-wing, the paper underwent a noticeable shift to the right in the late 1980s.[3] After 2004, under the editorial leadership of David Horovitz, a non-partisan, more inclusive editorial line was fostered. Today the Post features columns and opinion articles spanning the political spectrum. 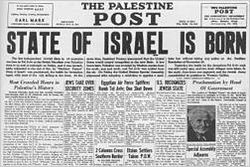 The Palestine Post was founded on December 1, 1932 by American journalist-turned-newspaper-editor, Gershon Agron in the British Mandate of Palestine. During its time as The Palestine Post, the publication supported the struggle for a Jewish homeland in Palestine and openly opposed British policy restricting Jewish immigration during the Mandate period.

According to the Historical Jewish Press, The Palestine Post was established "as part of a Zionist-Jewish initiative", and "Zionist institutions considered the newspaper one of the most effective means of exerting influence on the British authorities".[4]

On the evening of February 1, 1948, a stolen British police car loaded with half a ton of TNT pulled up in front of the Jerusalem office of the Palestine Post. The driver of a second car arrived a few minutes later, lit the fuse and drove off.[5] The building also contained other newspaper offices, the British press censor, the Jewish settlement police, and a Haganah post with a cache of weapons. Arab leader Abd al-Qadir al-Husayni claimed responsibility for the bombing, but historian Uri Milstein reported that the bomb had been prepared by the Nazi-trained Fawzi el-Kutub, known as "the engineer" , and that two British army deserters were also involved, Cpl. Peter Mersden and Capt. Eddie Brown.[6][7] Three persons died later, one newspaper typesetter and two people who lived in a nearby block of flats.[8] Dozens of others were injured and the printing press was destroyed. The morning paper came out in a reduced format of two pages, printed up at a small print shop nearby.[9]

In 1950, two years after the State of Israel was declared, the paper was renamed The Jerusalem Post.

Until 1989 the paper supported the forerunners of the Labor Party. In 1989, the paper was purchased by Hollinger Inc. A number of journalists resigned from the Post after Conrad Black's takeover and founded The Jerusalem Report, a weekly magazine eventually sold to the Post. The leader of the walkout was David Landau, who founded Haaretz English Edition and went on to become editor-in-chief of Haaretz until 2009.

On November 16, 2004, Hollinger sold the paper to Mirkaei Tikshoret Ltd., a Tel Aviv-based publisher of Israeli newspapers. CanWest Global Communications, Canada's biggest media concern, had announced an agreement to take a 50 percent stake in the Jerusalem Post after Mirkaei bought the property, but the deal soured. The two sides went to arbitration, and CanWest lost.[10]

The New York Times says "The Jerusalem Post’s stance has swung back and forth."[11] Left-wing and right-wing columns are often featured on the editorial pages. It espouses economic positions close to those of libertarianism: tight fiscal control on public spending, curbing of welfare, cutting taxes, and anti-union monopoly legislation, among others.[citation needed] The paper competes with Haaretz newspaper, which began publishing an English language edition in the 1990s as an insert to the International Herald Tribune. In summer '11 the paper fired its outspoken columnist Larry Derfner for a controversial post in his personal blog that irritated some of the paper's right-wing readers. The dismissal was criticized by many, most notably former Editor-in-Chief Jeff Barak.

The Jerusalem Post is published from Sunday to Friday, with no edition appearing on Saturday (the Jewish Sabbath) and Jewish religious holidays. The current Editor-In-Chief is Steve Linde, who took over from David Horovitz in 2011. The paper hosts a number of regular opinion columnists who provide insights on particular subjects such as religion, foreign affairs and economics. The paper's current Managing Editor is David Brinn, its News Editor is Ilan Evyatar and Night Editor is Jonathan Beck.

The paper also publishes editions geared for the foreign market—a Christian edition, a French-language edition and an international edition—as well as several newspapers for children and teenagers. In 2007, it inaugurated a Hebrew-only business daily called The Business Post. There is also a section on Iran called "Iranian Threat'.

The Jerusalem Post also publishes a monthly magazine titled Ivrit. Its target audience is people learning Hebrew language and it is described as "an easy-Hebrew" publication, meant for improving basic Hebrew reading skills. It uses vowel notation system to make comprehension of the alephbet abjad simpler.[13]

The Jerusalem Post also publishes an online edition found at, and colloquially referred to as, Jpost.com. The site contains archives that go back to 1989, and the default search on the site sends users to archive listings, powered by ProQuest, where articles can be purchased.[14] Free blurbs of the article are available as well, and full articles are available when linked to directly from navigation within JPost.com or from a search engine.

A French language version of the newspaper is also published online at fr.jpost.com.[15]