Jana Gana Mana (Bengali: জন গণ মন, Jôno Gôno Mono) is the national anthem of India. Written in highly Sanskritized (Tatsama) Bengali, it is the first of five stanzas of a Brahmo hymn composed and scored by Nobel laureate Rabindranath Tagore. It was first sung at the Calcutta Session of the Indian National Congress on 27 December 1911. Jana Gana Mana was officially adopted by the Constituent Assembly as the Indian national anthem on January 24, 1950.[1][2]

A formal rendition of the national anthem takes fifty-two seconds. A shortened version consisting of the first and last lines (and taking about 20 seconds to play) is also staged occasionally.[3] Tagore wrote down the English translation[4] of the song and along with Margaret Cousins (an expert in European music and wife of Irish poet James Cousins), set down the notation which is followed till this day.[5] It is of interest that another poem by Tagore (Amar Shonar Bangla) is the national anthem of Bangladesh.[6]

The text, though Bengali, is highly sanskritized (written in a literary register called Sadhu bhasa). As quasi-Sanskrit text, it is acceptable in many modern Indic languages, but the pronunciation varies considerably across India. This is primarily because most Indic languages are abugidas in that certain unmarked consonants are assumed to have an inherent vowel, but conventions for this differ among the languages of India. The transcription below reflects the Bengali pronunciation, in both the Bengali script and romanization. 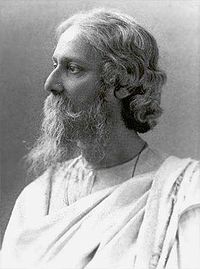 The following translation, attributed to Tagore, is provided by the Government of India's national portal:[3]

Thou art the ruler of the minds of all people,
Dispenser of India's destiny.
Thy name rouses the hearts of Punjab, Sindh,
Gujarat and Maratha,
Of the Dravida and Orissa and Bengal;
It echoes in the hills of the Vindhyas and Himalayas,
mingles in the music of Jamuna and Ganges and is
chanted by the waves of the Indian Sea.
They pray for thy blessings and sing thy praise.
The saving of all people waits in thy hand,
Thou dispenser of India's destiny.
victory forever.

This English translation by Tagore is also famous as

The Morning Song of India. Wikisource.  and continues further to four more stanzas.

Courtyard in Madanapalle where Jana Gana Mana was first sung.

Rabindranath Tagore translated Jana Gana Mana from Bengali to English and also set it to music in Madanapalle[5], a town located in the Chittoor district of Andhra Pradesh state, India. Though the Bengali song had been written in 1911, it was largely unknown except to the readers of the Brahmo Samaj journal, Tatva Bodha Prakasika, of which Tagore was the editor.

During 1919, Tagore accepted an invitation from friend and controversial Irish poet James H. Cousins to spend a few days at the Besant Theosophical College, of which Cousins was the principal. On the evening of February 28,1919 he joined a gathering of students and upon Cousins' request, sang the Jana Gana Mana in Bengali. The college authorities, greatly impressed by the lofty ideals of the song and the praise to God, selected it as their prayer song. In the days that followed, enchanted by the dreamy hills of Madanapalle, Tagore wrote down the English translation of the song and along with Cousins' wife, Margaret (an expert in Western music), set down the notation which is followed till this day. The song was carried beyond the borders of India by the college students and became The Morning Song of India[4] and subsequently the national anthem.

Today, in the library of Besant Theosophical College in Madanapalle, the framed original English translation of Jana gana Mana, titled as The Morning Song of India in Tagore's handwriting is displayed.[7]

The National Anthem of India is played or sung on various occasions. Instructions have been issued from time to time about the correct versions of the Anthem, the occasions on which these are to be played or sung, and about the need for paying respect to the anthem by observance of proper decorum on such occasions. The substance of these instructions has been embodied in the information sheet issued by the government of India for general information and guidance.[3]

The poem was composed in December 1911, precisely at the time of the Coronation Durbar of George V, and is considered by some to be in praise of King George V and not God. Tagore however translated Jana Gana Mana in English as the Morning Song of India[4], addressing God and the motherland in it. For a more detailed discussion on the controversy, see Jana Gana Mana (the complete song).

In July 1985 in the state of Kerala, some of the Jehovah's Witnesses' children were expelled from school under the instructions of Deputy Inspector of Schools for having refused to sing the national anthem, Jana Gana Mana. A parent, V. J. Emmanuel, appealed to the Supreme Court of India for legal remedy. On August 11, 1986, the Supreme Court overruled the Kerala High Court, and directed the respondent authorities to re-admit the children into the school. The decision went on to add: "Our tradition teaches tolerance, our philosophy preaches tolerance, our Constitution practices tolerance, let us not dilute it".[8]

A controversy swirls around the claim by Captain Ram Singh Thakur, an associate of Netaji Subhas Chandra Bose, that he, and not Rabindranath Tagore, wrote the score for the national anthem on Netaji's behest.[9][10][11] An advertisement released in Calcutta newspapers by the Gorkha Hill Council to mark the Netaji Subhas Chandra Bose centenary on January 23, 1997 plunged him into controversy.[12] The advertisement hailed him as the Gorkha who set the national anthem to music, following sharp reactions that such a claim was never made before. Capt. Ram Singh Thakur intended to write a letter to President Shankar Dayal Sharma[12] claiming that his contribution in composing the score of the national anthem is being refuted just because he is a Gorkha. Netaji's nephew, Dr Sisir Bose, said that Captain Ram Singh Thakur had composed the band-score of a Hindi song, Subh Sukh Chain similar to the national anthem, but not identical. Tagore is widely believed to have himself set the lyrics of Jana Gana Mana to music as early as 1919[5], like he had done to Amar Shonar Bangla, now the National Anthem of Bangladesh[13], Ekla Cholo Re, another favorite song of Netaji Subhas Chandra Bose, and his numerous other musical compositions, famous as Rabindra Sangeet. The credit to Tagore for the music of Jana Gana Mana is also upheld by the Government of India.[3].