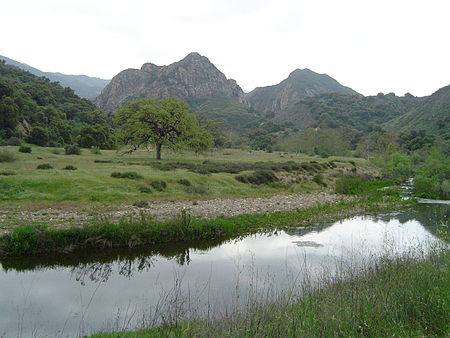 Malibu Creek State Park, with the Goat Buttes in the background.

Malibu Creek State Park is a California state park in the Santa Monica Mountains near Malibu, in Calabasas. It opened to the public in 1976.

Malibu Creek State Park stretches from below Malibu Lake in the west to Piuma Road in the east. It follows the creek down to the Pacific Ocean and includes the Adamson House and creek's mouth in the Malibu Lagoon at the beach and Pacific Ocean. Tapia Park has recently been incorporated as a subunit of the park. The park includes three natural preserves:

The area is habitat for fauna such as: mountain lions, bobcats, mule deer, golden eagles, and southern steelhead. In order to promote steelhead runs, the obsolete 1920s Rindge Dam is slated to be removed from lower Malibu Creek.

The majority of the park's lands were donated by Bob Hope. [3] Other parts of the park, added later, were previously owned by Paramount Pictures and 20th Century Fox for movie ranches. Part of the former 20th Century Fox Ranch had been purchased in 1966 from Ronald Reagan. The first Reagan Ranch, known as 'Yearling Row,' was owned by the future president from 1951 to 1966. It was sold by the Reagans to pay campaign debts from the 1966 California governor's campaign. The ranch life was used to develop Reagan's 'cowboy persona' used in the gubernatorial and presidential campaigns and while in each office.[citation needed] Additional parcels have been connected by the Santa Monica Mountains Conservancy and Santa Monica Mountains National Recreation Area.[4]

The park is home to several culturally significant areas, including the Sepulveda Adobe, and the ruins of Mott Adobe. To the north is the former Reyes Adobe and Rancho Las Virgenes.

Most recently an area was annexed to the park known as the King Gillette Ranch, with a landmark Spanish Colonial Revival style residence and estate buildings designed by renowned architect Wallace Neff in the 1920s for owner King Gillette, the early 20th century inventor and manufacturer of the disposable razor. It was later used by the Catholic Claretian Order as 'Claretville' in the 1950s-60s,[5] then several other spiritual groups, and finally by Soka University in the 1990s until the recent purchase for the park. The new Visitors Center for the Santa Monica Mountains National Recreation Area will be relocated here in the historic Stables compound.

The park, when a movie ranch was known as the Fox Ranch and Century Ranch during its ownership by 20th Century Fox, has been used as a location in dozens of films, starting with a number of Tarzan movies:

Other television programs that used the park to pass for a post-apocalyptic earth were Planet of the Apes and the children's program Ark II. This was also a location for Robin Hood: Men in Tights where the Goat Buttes are seen in the background of the final wedding scene.[6]

The park is still used for occasional filming.