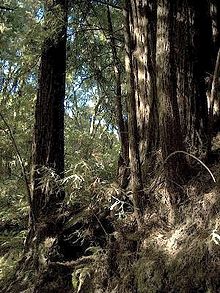 Redwood trees in the Forest of Nisene Marks.

The Forest of Nisene Marks is a State Park located in Aptos, California and contains over 40 miles (64 km) of hiking trails and fire roads through approximately 10,000 acres (40 km2) of variable terrain. The park was named for Nisene Marks, a passionate nature lover and the mother of a Salinas farming family that purchased the land from lumber companies (and others), in the hopes of finding oil. Nisene's children donated the 9,700 acres (39 km2) of land in her memory, to the State of California (with the help of the Nature Conservancy) in 1963 after drilling efforts had failed to find any oil.[1] The California State Parks department, with additional help from the Save-the-Redwoods League, expanded the park to 10,036 acres (40.61 km2). The park is on land that was clear-cut during a forty-year period of logging (1883-1923) by the Loma Prieta Lumber Company. Visitors can still find evidence of logging operations, mill sites and trestles in the park. The park offers rugged semi-wilderness, rising from sea level to steep coastal mountains of more than 2,600 feet (790 m). Today the park is a popular spot for running, hiking and horseback riding. Mountain biking is restricted to the fire road as of 2004 because of deed restrictions regarding the state park. Picnic tables and barbecue pits are available. A trail camp is located six miles (10 km) from the nearest parking lot. Dogs are allowed only along the entrance road and in the picnic areas and must be on a leash no longer than six feet at all times. Camping (backpacking) is also available with advance registration.

The quake's epicenter and Five Finger Falls are the two most popular attractions in the park. But in early 2007, there was landslide on Aptos Creek Trail which leads to Five Finger Falls and the trail was closed. The waterfall is still reachable by a longer route, via the Big Slide trail.