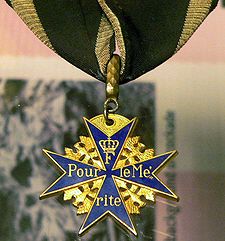 The Pour le Mérite, known informally as the Blue Max (German: Blauer Max),[1] was the Kingdom of Prussia's highest military order for German soldiers until the end of World War I.

The award was a blue-enameled Maltese Cross with eagles between the arms based on the symbol of the Johanniter Order, the Prussian royal cypher, and the French legend Pour le Mérite ("for Merit") arranged on the arms of the cross.

A civil version of the order, for accomplishments in the arts and sciences, still exists in the Federal Republic of Germany.

The Pour le Mérite was first founded in 1740 by King Frederick II of Prussia, named in French, the language of the Prussian royal court at the time. Until 1810, the Order was both a civilian and military honor. In January of that year, King Frederick William III decreed that the award could be presented only to serving military officers. The Pour le Mérite is correctly called an "order", in which a man or woman is admitted into membership, and should not be referred to as a "medal" or "decoration".[citation needed]

In March 1813, Frederick William III added an additional distinction, a spray of gilt oak leaves attached above the cross. Award of the oak leaves originally indicated extraordinary achievement in battle, and was usually reserved for high-ranking officers. The original regulations called for the capture or successful defense of a fortification, or victory in a battle. By World War I, the oak leaves often indicated a second or higher award of the Pour le Mérite, though in most cases the recipients were still high-ranking officers (usually distinguished field commanders fitting the criteria above; the few lower ranking recipients of the oak leaves were mainly general staff officers responsible for planning a victorious battle or campaign). In early 1918, it was proposed to award the oak leaves to Germany's top flying ace, Manfred von Richthofen, but he was deemed ineligible under a strict reading of the regulations. Instead, Prussia awarded von Richthofen a slightly less prestigious honor, the Order of the Red Eagle, 3rd Class with Crown and Swords. This was still a high honor, as the 3rd Class was normally awarded to colonels and lieutenant colonels, and von Richthofen's award was one of only two of the 3rd Class with Crown and Swords during World War I.

In 1866, a special military Grand Cross class of the award was established. This grade of the award was given to those who, through their actions, caused the retreat or destruction of an army. There were only five awards of the Grand Cross: to King Wilhelm I in 1866, to Crown Prince Frederick William of Prussia (later Emperor Frederick III) and Prince Frederick Charles of Prussia in 1873, to Tsar Alexander II of Russia in 1878, and to Helmuth Graf von Moltke in 1879.

The Pour le Mérite gained international fame during World War I. Although it could be awarded to any military officer, its most famous recipients were the pilots of the German Army Air Service (Luftstreitkräfte), whose exploits were celebrated in wartime propaganda. In aerial warfare, a fighter pilot was initially entitled to the award upon downing eight enemy aircraft.[1] Aces Max Immelmann and Oswald Boelcke were the first airmen to receive the award, on January 12, 1916.[1] Although it has been reported that because of Immelmann's renown among his fellow pilots and the nation at large, the Pour le Mérite became known, due to its color and this early famous recipient, as the Blue Max, this story is probably an urban legend.[2]

The number of aerial victories necessary to receive the award continued to increase during the war; by early 1917, it generally required destroying 16 enemy airplanes, and by war's end the approximate figure was 30. However, other aviation recipients included zeppelin commanders, bomber and observation aircrews, and at least one balloon observer.

Although many of its famous recipients were junior officers, especially pilots, more than a third of all awards in World War I went to generals and admirals. Junior officers (army captains and lieutenants and their navy equivalents) accounted for only about 25% of all awards. Senior officer awards tended to be more for outstanding leadership in combat than for individual acts of bravery.

Recipients of the Blue Max were required to wear the award whenever in uniform.

The Order became extinct with Kaiser William II's abdication as King of Prussia on 9 November 1918, and was never awarded again to a new member. The last person to receive it was Theo Osterkamp. 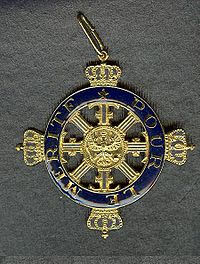 Similar orders in other countries

Besides Prussia, several other states of the former German Empire also conferred similar awards for the arts and sciences. These included the Kingdom of Bavaria's Maximilian Order for Art and Science (Maximiliansorden für Kunst und Wissenschaft), the Duchy of Anhalt's Order of Merit for Science and Art (Verdienstorden für Wissenschaft und Kunst), and the Principality of Lippe's Lippe Rose Order for Art and Science (Lippische Rose, Orden für Kunst und Wissenschaft).

A number of other countries have founded similar high civic honors for accomplishments in the arts and sciences. The sovereign of the Commonwealth realms confers the Order of Merit and Order of the Companions of Honour. The Republic of Austria confers the Austrian Decoration of Honor for Science and the Arts, founded in 1955. Like the Order Pour le Mérite for Sciences and Arts, this was in a sense a revival of an earlier imperial award, in this case the Austro-Hungarian Decoration of Honor for Art and Science (Österreichisch-Ungarisches Ehrenzeichen für Kunst und Wissenschaft), which existed from 1887 to 1918. Unlike the German award, however, the design of the modern Austrian award is unlike that of its imperial predecessor.