The Bailiwick of Brandenburg of the Chivalric Order of Saint John of the Hospital at Jerusalem (in German, the Balley Brandenburg des Ritterlichen Ordens Sankt Johannis vom Spital zu Jerusalem), or simply the Order of Saint John (Der Johanniterorden), is the German Protestant branch of the Knights Hospitaller, the oldest chivalric order, which generally is considered to have been founded in Jerusalem in the year 1099.

The Order is led by its thirty-seventh Herrenmeister ("Master of the Knights"), H.R.H. Oskar, Prince of Prussia (born in 1959, he is a great-grandson of the last German emperor, Wilhelm II). Each of its knights, about four thousand men worldwide, is either a Knight of Justice (Rechtsritter) or a Knight of Honor (Ehrenritter).[1] Membership in the order is by invitation only, and individuals may not petition for admission. The Order comprises seventeen commanderies in Germany, one each in Austria, Finland, France, Hungary, and Switzerland, and one global commandery with subcommanderies in eight other countries (Australia, Belgium, Canada, Colombia, Namibia, South Africa, the United States, and Venezuela).

Together with the London-based Most Venerable Order of the Hospital of Saint John of Jerusalem (of which, the British monarch is Sovereign Head), the Swedish Johanniterorden i Sverige (the Swedish monarch is its High Protector),[2] and the Dutch Johanniter Orde in Nederland (the Dutch monarch is an honorary commander),[3] the Order forms the Alliance of the Orders of St. John of Jerusalem. With the Roman Catholic Sovereign Military Order of Malta (the "SMOM"), these four "Alliance orders" represent the legitimate heirs of the Knights Hospitaller. They consider other orders using the name of Saint John to be merely imitative, and the Alliance and the SMOM have jointly formed a False Orders Committee (now renamed and reorganized as the Committee on Orders of St. John), with representatives of each of the five orders, for the purpose of exposing and taking action against such imitations.[4]

The Order and its affiliate orders in the Netherlands and Sweden, which became independent of the Bailiwick of Brandenburg after the Second World War, in 1946, are Protestant. The SMOM, headquartered in Rome, admits only men and women of the Roman Catholic faith.[5] The Most Venerable Order of the Hospital of Saint John of Jerusalem, a revival of the mediaeval English Langue of the Order of Saint John, was chiefly Anglican at its formation in the nineteenth century but has since opened its membership to men and women of any faith.[6]

Through its Johanniter-Unfall-Hilfe ("Saint John Accident Assistance"), its hospitals, nursing homes, hospices, and other institutions, the Order today is a major provider of medical and rescue services in Germany and, to a lesser extent, of comparable services elsewhere in Europe, Africa, and the Americas. These services are similar to the St. John Ambulance in many Commonwealth nations and to various organisations affiliated with the Sovereign Military Order of Malta. All are carried out under the auspices of the Christian faith.

Additionally, spiritual retreats and other activities of the Order concentrate on the spiritual formation and developement of Christian citizens in the modern world.[7]

Appearance of the Order of Saint John in German-speaking Lands

Soon after the formation of the Order in Jerusalem,[8] supporters in Western Europe began to donate farmland and other assets for the objectives of the Order, the military protection and medical aid of Christian pilgrims to the Holy Land. In time, these landholdings were gathered into regional administrative divisions known as commanderies, each headed by a senior knight, or knight commander of the Order. The first commandery in the Germanies was founded in the mid-twelfth century.[9]

By 1318, the Bailiwick of Brandenburg had been established in the northeastern parts of the Holy Roman Empire, an aggregation of commanderies of the Order under a bailiff, a high officer of the Order. The riches and influence of the Bailiwick (especially after augmentation by properties of the suppressed Order of the Temple) were so sizeable that, in 1382, the Prior of the German Langue (the eight territorial "Tongues" of the mediaeval Order of Saint John were its major subdivisions) in what became known as the Accord of Heimbach recognized the right of the Bailiwick of Brandenburg to choose its own governor (the Bailiff of Brandenburg, more commonly called the Herrenmeister) and preceptors (the commanders of the commanderies constituting the Bailiwick).[10]

During the Protestant Reformation, large parts of the German Langue of the then undivided Order of Saint John followed the leadership of the Bailiwick of Brandenburg and accepted Lutheran theology while continuing to recognize the headship of the grand master of the Order, who, with the majority of the knights, remained Roman Catholic. The higher officials of the Order, now headquartered on the Mediterranean island of Malta after the successive losses of Jerusalem, Acre, and Rhodes to Moslem Arabs and Turks, evinced a desire to maintain a relationship with the Protestant knights despite the theological and ecclesiological differences between the two groups. But in 1581, then Grand Master Jean de la Cassière called Herrenmeister Martin von Hohenstein before the Chapter (ruling council) of the Order of Saint John in Malta; when the Herrenmeister did not appear, De la Cassière declared the expulsion of the knights of the Bailiwick from the Order, though he did so without the agreement of the Chapter.[11]

Even separated from the Roman Catholic main stem of the Order of Saint John, the Bailiwick of Brandenburg continued to flourish. Admitting only noblemen, principally from the Germanies, the Bailiwick maintained hospitals and other institutions to care for the poor, the sick, and the injured. Elections of successive Herrenmeister (including a Roman Catholic, Adam von Schwarzenberg, in 1641) were announced to the Grand Prior of Germany in the Roman Catholic Order of Malta and, in accordance with the requests from the governing authorities of the Order of Malta, responsions (periodic remittances from revenues) were paid to the Grand Priory.[12]

The horrific Thirty Years' War devastated the Bailiwick, resulting in the deaths of many knights and the destruction of much of the wealth of the Bailiwick. By the terms of the Peace of Westphalia ending the conflict, the Bailiwick was effectively placed under the protection of the Prince Electors of Brandenburg, later Kings of Prussia, members of the House of Hohenzollern.[13] Under this protection, the Johanniterorden came to be headquartered at Sonnenburg Castle in the Neumark of Brandenburg, east of the Oder River, though the Herrenmeister resided in the Ordenspalais in Berlin from its completion in 1738.

As the intense sectarianism of early modern Europe gave way to the Enlightenment, further if sporadic attempts were made to accommodate the Protestant Bailiwick within the Roman Catholic Order of Malta. Despite cordial relations, however, including payment of responsions to Malta and participation of delegates from the Bailiwick in the Chapter General of the Order of Malta in 1776, nominal reunion of the two Orders was prevented by the withholding of papal approval.[14]

The Order in the Nineteenth Century and Thereafter

In 1811 and 1812, in his position of protector of the Order, King Frederick William III of Prussia transferred the powers of the Herrenmeister and the Chapter (the governing council of the Order) to the Prussian Crown, effectively dissolving the Bailiwick and confiscating its possessions. He established a similarly named (and similarly badged) order of merit, the Royal Prussian Order of Saint John, in its stead. (The insigne of another Prussian order of merit, the Pour le Mérite, nicknamed "the Blue Max", also was based on the design of the Johanniter neck cross.)[15] The Herrenmeister of the Bailiwick, Prince August Ferdinand, became the first grand master of the order of merit, continuing to reside in the palace of the Order, and all knights of the Order became members of the order of merit.[16] 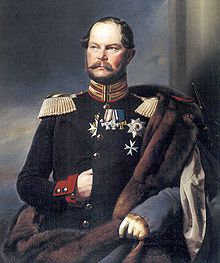 Prince Friedrich Carl Alexander, Herrenmeister from 1853 to 1883, wearing the breast cross of a Knight and the neck cross of his office 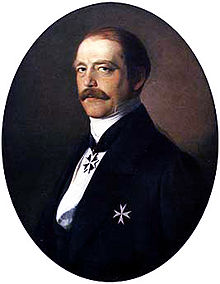 The order of merit was in its turn dissolved and King Frederick William IV of Prussia, again exercising the powers of the kings of Prussia as protectors of the Order, restored the original Bailiwick in 1852. The eight surviving knights of justice of the original Order were among its first members; in 1853, they elected the younger brother of the Prussian king, Prince Friedrich Karl Alexander, the new Herrenmeister of the restored Order. He announced his election to the head of the Order of Malta, who in acknowledgement recognized this restoration as the continuation of the historic Bailiwick.[17] The Johanniterorden and its branches became fully independent of the Roman Catholic grand master in Rome, although the Herrenmeisters then and since have continuously and explicitly recognized the Order's historical connection with the Roman Catholic Order of Malta.[18]

During the course of the nineteenth and twentieth centuries, the Order created and supported more and more charitable activities; it now owns and operates numerous hospitals, ambulance services, old-age homes, and nurseries and provides first-aid training courses and disaster relief, both within Germany and elsewhere.

After World War II, with the Neumark given by the victorious Allies to Poland (Sonnenburg has been renamed "Słońsk", and the castle lies in ruins),[19] the Order moved its headquarters to Bonn, West Germany. After the reunification of the Germanies, the headquarters were moved again, to Berlin.

More than location of the seat of the Order changed in the aftermath of the Second World War. The Swedish and Dutch commanderies separated from the direct oversight of the Bailiwick (though continuing in loose association with it through the Alliance) in 1946, and two years later the Bailiwick itself began to admit commoners to knighthood (the Finnish commandery, however, remains a purely noble society, as do the now independent Swedish and Dutch commanderies).[20]

Although the Herrenmeister is now elected and no longer is nominated by the king of Prussia or emperor of Germany, each holder of the office since 1693 has been a member of the House of Hohenzollern, the family of the former Prussian kings and last German emperors.[21]

The present status of the Order under German law derives from its incorporation in 1852 and from official recognition by the German government in 1957 and 1959 of the badges of rank in the Order as German decorations of merit.

Article on "Johanniterorden" in the German-language Wikipedia.

Robert M. Clark, Jr., The Evangelical Knights of Saint John: A History of the Bailiwick of Brandenburg of the Knightly Order of St. John of the Hospital at Jerusalem, Known as the Johanniter Order; Dallas, Texas: 2003.

Robert Storm, "A Brief History of the Bailiwick of Brandenburg of the Chivalric Order of St. John of the Hospital at Jerusalem", in Volume XXVIII, No. 1 (Easter, 2011), of Johanniter Herald (quarterly journal of the North American Subcommanderies of the Balley Brandenburg).