Helmuth Johann Ludwig von Moltke (German pronunciation: [ˈhɛlmuːt fɔn ˈmɔltkə]; 25 May 1848, Biendorf – 18 June 1916), also known as Moltke the Younger, was a nephew of Field Marshal Count Moltke and served as the Chief of the German General Staff from 1906 to 1914. The two are often differentiated as Moltke the Elder and Moltke the Younger. Moltke the Younger's role in the development of German war plans and the instigation of the First World War is extremely controversial.

Helmuth von Moltke was born in Mecklenburg-Schwerin and named after his uncle, Helmuth Karl Bernhard von Moltke, future Field Marshal and hero of the Wars of Unification. During the Franco-Prussian War Moltke served with the 7th Grenadier Regiment, and was cited for bravery. He attended the War Academy between 1875 and 1878 and joined the General Staff in 1880. In 1882 he became personal adjutant to his uncle, then Chief of the General Staff. In 1891, on the death of his uncle, Moltke became aide-de-camp to Wilhelm II, thus becoming part of the Emperor's inner circle. In the late 1890s he commanded first a brigade and then a division, finally being promoted to Lieutenant General in 1902.[1]

In 1904 Moltke was made Quartermaster-General; in effect, Deputy Chief of the General Staff. In 1906, he became chief on Schlieffen's retirement. His appointment was controversial then and remains so today. The other likely candidates for the position were Hans Hartwig von Beseler, Karl von Bülow, and Colmar Freiherr von der Goltz.[2] Critics charge that Moltke gained the position on the strength of his name and his friendship with the Kaiser. Certainly Moltke was far closer to the Kaiser than the other candidates. Historians argue, however, that Beseler was too close to Schlieffen to have succeeded him, while Bülow and Goltz were too independent for Wilhelm to have accepted them. Indeed, Moltke's friendship with the Kaiser permitted him latitude that others could not have enjoyed. Goltz, at least, saw nothing wrong with Moltke's performance as Chief.[3]

During the Marne Campaign of 1914, as a consequence of a clash with the Kaiser very shortly before the start of the war, Moltke's health broke down, and on 25 October 1914, he was succeeded by Erich von Falkenhayn.[4]

It is a matter of debate whether the "failure" of the Marne Campaign can be placed at Moltke's feet. Some critics contend that Moltke's weakening of the Schlieffen plan led to German defeat. The records show that Moltke, who was concerned about Russia, moved resources eastward. In fact, Moltke moved 180,000 men east before the war.[5] Many thousands more men were transported from the crucial right wing to the left wing facing France in Alsace and Lorraine. Most controversially, on August 28, Moltke sent two corps and a cavalry division to reinforce Ludendorff and Hindenburg just before the epic victory at Tannenberg. These series of moves have been viewed by some historians as responsible for much of the strategic failure of the Schlieffen Plan as enacted in 1914. A number of historians, notably Zuber and S.L.A. Marshall, contend that the failure of Alexander von Kluck's First Army to keep position with Karl von Bülow's Second Army, thus creating a gap near Paris that was exploited by the French, is a more direct cause than any planning foibles on Moltke's part. The Schlieffen School disagrees, and argues that Moltke lost control of the invading armies during the month of August and thus was unable to react when the First Battle of the Marne developed in September. While Moltke had lost effective touch with his field commanders, German operational doctrine had always stressed personal initiative on the part of subordinate officers, more so than in other armies. Other historians argue that the multitude of strategic options Moltke faced, and the danger of the Russian invasion of East Prussia clouded Moltke's judgement.[6] 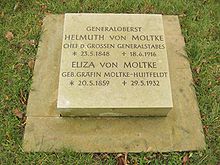 Grave on the Invalidenfriedhof Cemetery in Berlin

After being succeeded by Falkenhayn, Moltke was entrusted in Berlin with the office of chief of the home substitute for the general staff (Der stellvertretende Generalstab), which had the task of organizing and forwarding the reserves and of controlling the territorial army corps, corresponding to those at the front. Moltke's health continued to deteriorate and he died in Berlin on 18 June 1916 during the funeral for Marschall von der Goltz. He left memoirs entitled Die “Schuld” am Kriege (The Blame for the War), which up to 1921 had not yet been published.[4]